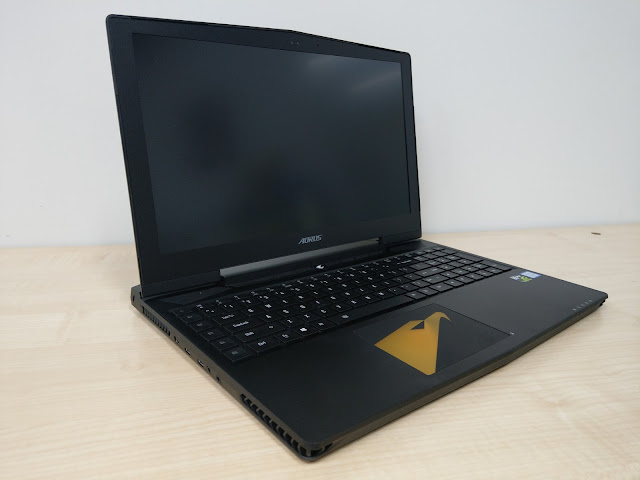 What
comes into your mind when you think about today’s gaming notebooks? Big and bulky
machines with fancy design and RGB lights? Do outrageously large water-cooled
notebook computers ring a bell? With a large focus and investment put into
gaming geared products, AORUS is going to change the way you think about gaming machines. With AORUS ‘s laptop division sole focus on powerful
gaming notebooks, they would have the expertise in this area. Today, we are
going to take a look at the latest AORUS X5V7 Gaming notebook to find
out the different kinds of innovations and considerations that have been placed in
this special piece of hardware.

The AORUS X5V7 is a 15.6-inch gaming notebook that is that is designed to
perform. It is one of the most powerful gaming notebook that we have
encountered thus far, and differentiates itself from the rest with its size.
Even though it is not equipped with the latest NVIDIA MAX-Q GTX 1070, it still
managed to maintain a rather slim profile as compared to other gaming notebooks
in the same class. The full NVIDIA GTX1070 is also expected to perform very
well.
The AORUS screams “high-end” everywhere. For the best possible gaming
experience, it is equipped with a 4K display panel that supports NVIDIA G-SYNC.
It also comes with a powerful Intel Core i7 7820HQ Kaby Lake based processor.
This is a full quad core processor that also supports hyper threading. It is
even comparable to a standard desktop processor. Of course, the system that we have for review also comes with an abundance* of 32GB of DDR4 RAM and 256GB SSD + 1TB HDD worth
of storage space. Even though we are just simply touching the surface on its
specifications, the combination of a good CPU, lots of RAM, fast storage,
powerful graphics card and great displays can already tell us what to expect
when we play games on it. Let’s looks at the various tests to find out more!

The AORUS X5V7 is a beaut. Weighing only at 2.5KG, it is one of the lightest gaming laptops out in the market that features a powerful NVIDIA GTX 1070 dedicated graphics card. It also looks much slimmer than typical laptops. Like many other gaming laptops, the AORUS X5V7 comes in a black matt finish, which complements really well with its RGB lightings. 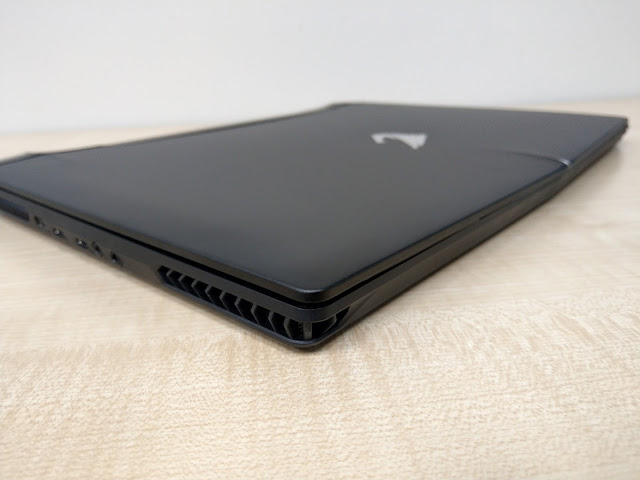 On the left, there is a mini display port, a thunderbolt port, a USB 3.1 Type-C port and headphones and microphone jacks. 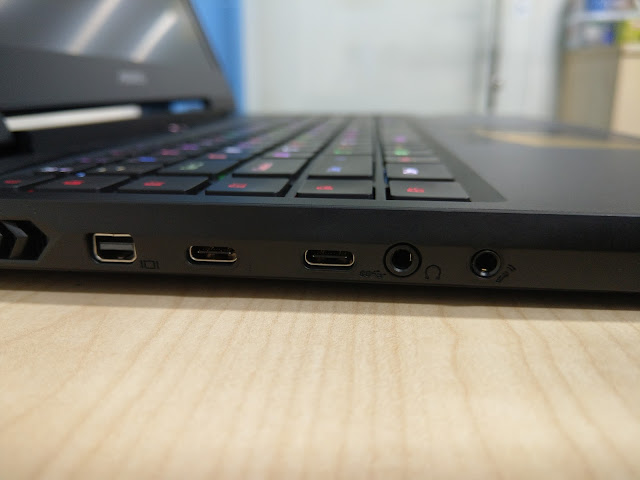 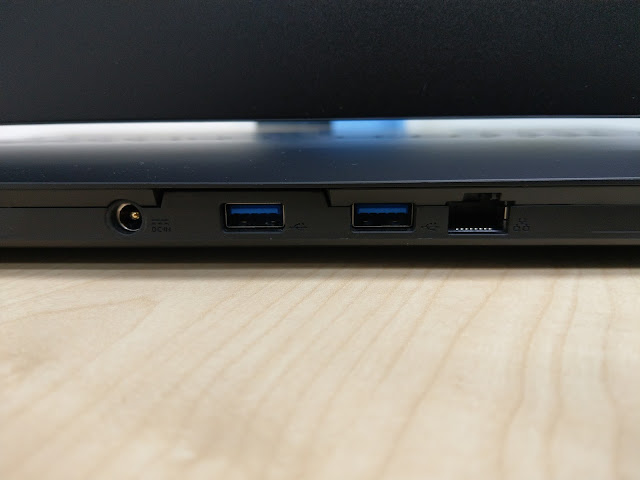 Lastly, on the right, we have a multi-card reader, another 2 x USB 3.1 ports and a single HDMI out port. 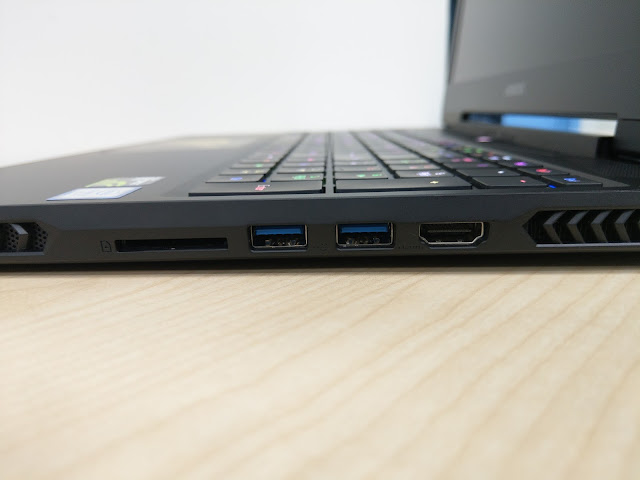 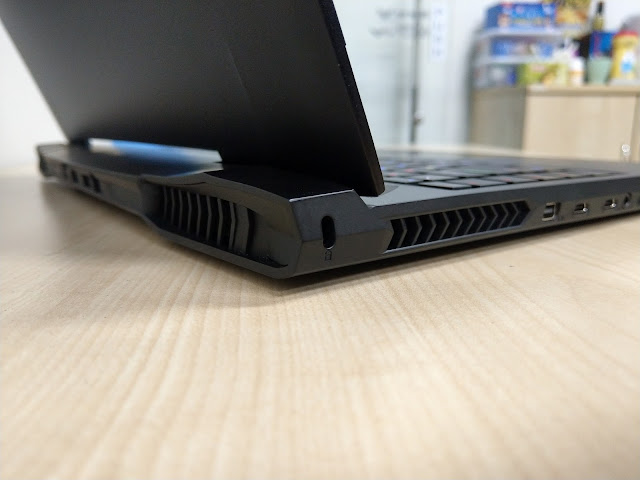 The AORUS X5V7 is designed for efficient dissipation of heat. With a
negative pressure airflow design, the air is taken from the front of the
chassis, which flows through the rest of all the other components to reach the
main heatsinks of the CPU and graphics card. Two fans at the rear of the
notebook then exhaust all the air that is pulled in. The design of putting the actual chips away from the palm rest
and allowing the hot air to be removed through the back ensures that users will not
feel the heat directly when gaming or doing some heavy computational tasks. However, it
must be taken note that despite it being very effective, the small fans on the
X5V7 is clearly audible, and may be disruptive while gaming.
Thermal
tests

We performed different temperature tests on the gaming notebook to determine
the effectiveness of its cooling solution. We took temperatures at the
different areas of the notebook that could be in contact with your hands during
usage. We also measured the software recorded CPU and GPU temperatures of
the system during both idle and gaming situations.
As
expected, the thermal dissipation system of the AORUS X5V7 performs rather well. At the wrist rest area, the temperature recorded on
load was about the human body’s temperature. This means that gamers will be able to
safely rest their wrists on top without feeling any discomfort. As we moved
nearer to the GPU and CPU chips, the temperatures increased. Even though actual
temperatures recorded by the software was much higher, the external
temperatures were significantly lower, as they were well dissipated away and
shielded from the user. 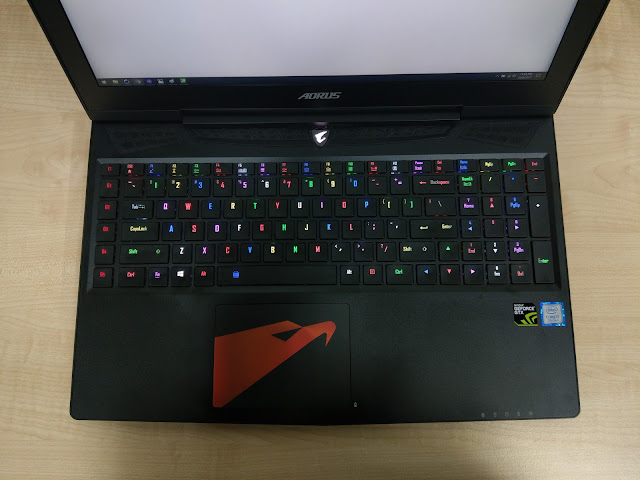 With
a high 4K resolution display, there is a need to have an accurate and sensitive
trackpad to properly control the unit. We can only say that the AORUS X5V7 did
this adequately well, as the trackpad is just responsiveness enough for
everyday use. The smooth surface on the trackpad also improves the overall
maneuverability of the cursor.
Keyboard
and Typing

It
was a pleasure to type on the AORUS X5V7. The key travel on each key was longer
than usual laptops, giving gamers higher sensitivity and discreet actions to
their games. The keys are also RGB lit. Each key has an individually backlit RGB,
while customizations of the effects can be done via the AORUS FUSION software
that is preinstalled on the system. However, we thought that such features
could be probably eliminated, as it serves no other purpose other than being
fancy. A single colored LED backlight could have served the same functions as
well. That is why, out of the 13 predetermined lighting effects on the
keyboard, we preferred the most basic – Fade on Keypress. 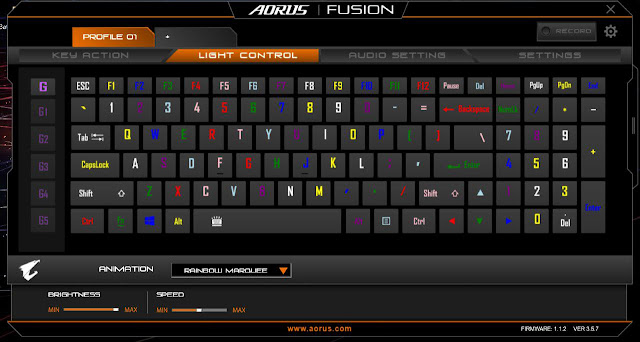 Every
single feature on the AORUS X5V7 has got something worth talking
about. has certainly put a lot of effort into designing and building
the whole unit, as there is simply so much happening on it. The display panel
on this unit has been properly X-Rite Pantone certified. In other sense, this
gaming laptop will also be an excellent choice for creative professionals as
the colours on the display is expected to be more accurate than any other
display colour profiles. For gamers, this also means that they will be viewing
the colours on the games as what their developers and designers intended them
to be.
Audio
Experience

We
were simply impressed with the speakers on the AORUS X5V7! has fully
understood that an audio and speaker quality largely affects the overall gaming
experience. Therefore, they have put in an additional effort to include great
sounding speakers on the unit. In our own game tests, we could distinctly hear
the different sound effects. The placement of the speaker drivers was precise,
and the gamer sitting in front will be able to fully immersive himself/herself. We could determine the left and right channels
coming from our games. This is especially useful for games like FPS, where it
is vital to know where your opponents are. 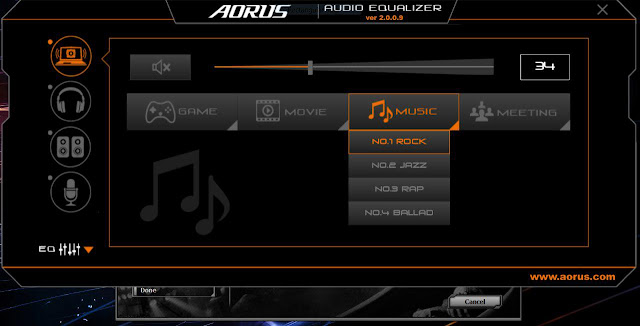 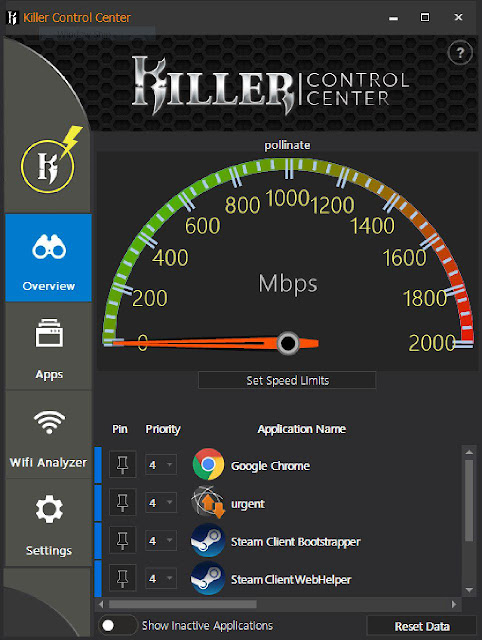 AORUS X5V7 is equipped with the popular Killer LAN and Killer
Wireless AC modules for the best possible gaming and lag-free experience. The
Killer Control Center software can also customize the network priority of each
packet accordingly. For example, if you are in game, you can simply prioritize
all gaming packets to reduce the latency of the packets through your network.
Overclocking 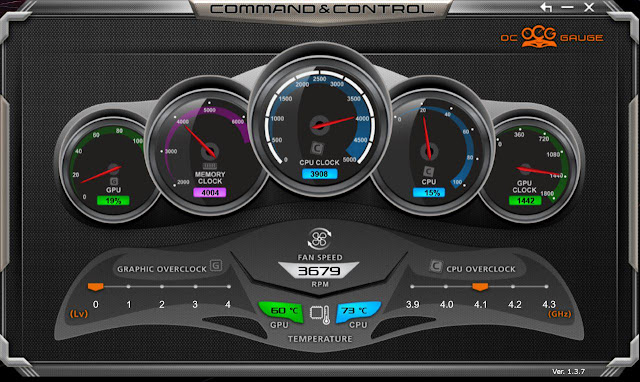 The AORUS X5V7 allows a small degree of overclocking on it via the Command
and Control software. The CPU can be overclocked from its stock 3.9GHz all the
way to 4.3GHz, while the GPU can be overclocked from its stock 1442MHz to
1542MHz. The software is also very easy to use, and the clocks can easily and
safely be reached without much effort. We will find out the performance
increase with overclocking in the tests below.

Of
course, we are going to test the AORUS X5V7 with games running with 4K
resolutions. Is this gaming machine good enough to lift the weights of games
running at 4K resolution? All tests are done with a CPU that is overclocked to 4.1GHz.
Based
on our tests, the GTX 1070 could produce comparatively good results at 4K
resolutions. However, the results have shown us that the framerate fall shy of the expected 60FPS.
Thankfully, with the GSYNC compatible display, the negative effects of low
refresh rates where reduced. This technology was seen to have successfully
reduced tear, stutter and display lags. It is however, still recommended to run
games at a lower resolution, such as 1440p, for an overall better experience. 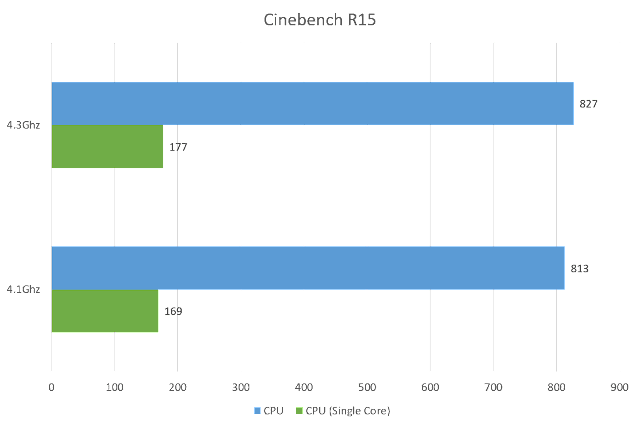 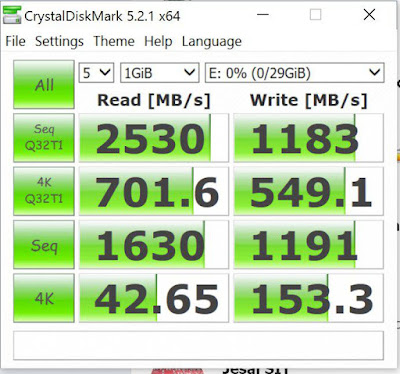 We
always think that the speed of the storage device can solely determine the
actual responsiveness of the system. By having an PCIe NVMe based SSD in this
gaming machine, the system was simply snappy. Starting up and shutting down was
achieved in matter of seconds, and opening of applications was extremely quick.
Of course, as SSD space could be limited, the unit also comes with an
additional 1TB of Hard Drive space for data storage.
Conclusion 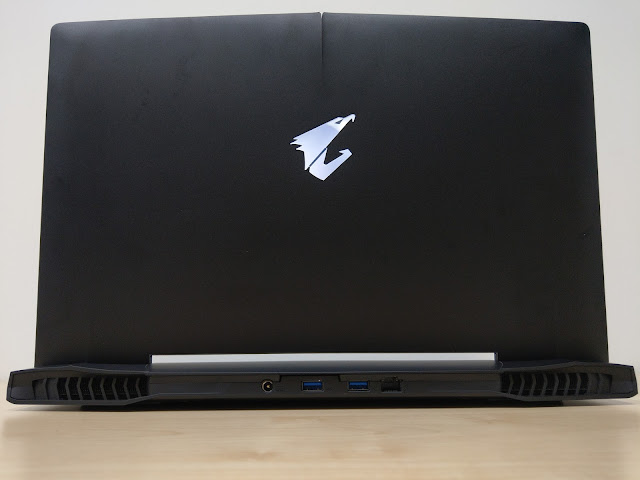 The AORUS X5V7 performs well in every single aspect that matters to
gaming. It has got powerful hardware capable of smooth framerates, a great
sharp and accurate 4K display, awesome audio performance and superb keyboard.
These sums up to a close to perfect gaming machine for the best possible gaming
experience. Moreover, the whole package is also very portable as it weighs only
2.5KG! If you are looking at a premium gaming machine that gives you the
confidence in your games, the AORUS X5V7 is a compelling choice.