HyperX Join Forces with
GPL Summer 2017
HyperX will be the main
sponsor of the ultimate LOL matches in Southeast Asia
Taipei, Taiwan – Aug 21, 2017 – HyperX, the gaming division
of Kingston
Technology,
today announce the title sponsorship of the Garena Premier League 2017 Summer Split, the biggest League of
Legends tournaments in Southeast Asia. Elite teams from Thailand, Indonesia,
Malaysia, Philippine, Singapore, and Vietnam will meet in Bangkok, equipped
with HyperX gaming peripherals and fight for the spots to 2017 World
Championship!
GPL Summer 2017 will take place at Mueng
Thai GMM Live House in Bangkok, Thailand from August 25 to 27. Seven teams
from six countries will prove their strength and compete for the biggest prize
of $30,000. Being an avid supporter of eSports and the gaming
community, HyperX are at the forefront of delivering
award-winning products and unparalleled performance for teams to take their
game to the next level. With the highest quality gaming headsets, keyboards and
mice, HyperX will carry on its support to the GPL Summer 2017 and bring the
best competitions to SEA gaming fans.
“We are thrilled to partner with Garena
Thailand for GPL Summer 2017 to demonstrate our
longstanding commitment to the gaming
community,” said Susan Yang, Marketing Manager, APAC Region, HyperX. “As
eSports getting popular among SEA countries and becoming one of mainstream
pastimes, HyperX will continue its support and bring the fun of the game to all
eSports fans.” 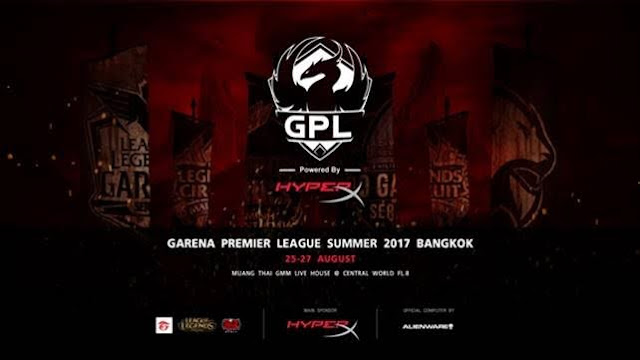 About HyperX
HyperX is the high-performance product
division of Kingston Technology encompassing high-speed DDR4 and DDR3 memory,
SSDs, USB Flash drives, and gaming accessories. Targeted at gamers,
overclockers and enthusiasts, HyperX is known throughout the world for quality,
performance and innovation. HyperX is committed to eSports as it sponsors over 30 teams globally and is the main sponsor
of Intel Extreme Masters. HyperX can be found at
many shows including China Joy, PAX, DreamHack, and ESL One.
For more information, please visit
the HyperX home page.