Review of the AMD Ryzen 3 - Is it better than the Intel Core i3? - The Tech Revolutionist

Review of the AMD Ryzen 3 – Is it better than the Intel Core i3?

Home » Review of the AMD Ryzen 3 – Is it better than the Intel Core i3? 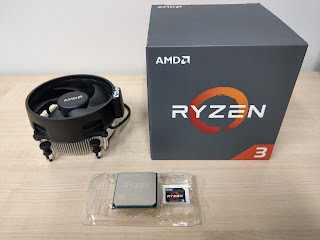 AMD has just launched their new entry level Ryzen 3 processors to fill in the gap within their entire product lineup. The two new offerings that will be available are the Ryzen 3 1300X and the Ryzen 3 1200. These two processors will go head on with the current Intel Core i3 processors, as they are priced exactly at the same price point. So… If you are building a new desktop computer, should you buy the Ryzen 3 or the Intel Core i3 processor? Which processor brings more performance and value to the table? Read on to find out more.
Processor Comparison 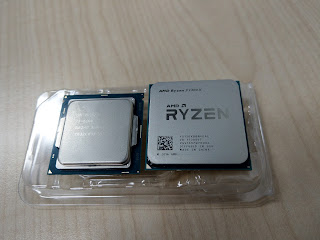 The Ryzen 3 is based on AMD’s latest “Zen” Micro-architecture. These are true quad-core processors that have Simultaneous Multi-Threading (SMT). In comparison, the Intel Core i3 is a dual-core processor with Intel Hyper-Threading enabled. Theoretically, the Ryzen 3 should perform better than the Intel Core i3 in this case, as each single core do not need to compete with resources within the CPU. However, the latest Intel Skylake and Kaby Lake processors are equipped with a more superior architecture. This results in being more efficient in terms of completing more instructions per cycle (IPC), and the Intel processors could also have the potential to perform better than the Ryzen 3 processors.
In the end, it perhaps still boils down to the type of application that will be used by the end-user. Before we make any assumptions on the actual compute performance between these two types of processors, there are some fundamental differences between them. The Intel Skylake and Kaby Lake Core i3 CPUs have a graphics processing circuitry integrated into the processor. This allows these Intel processors to have the capabilities to output display without the need of a dedicated graphics card. On the other hand, as the Ryzen 3 processors simply lack such a graphics chip on the processor, users will have to purchase an additional graphics card for their new PC build. This could likely increase the final cost of their build, deterring them from laying their hands on the new Ryzen 3 processors.
Nonetheless, let’s take a look at the performance of these new Ryzen 3 processors when compared to the Intel’s counterparts. 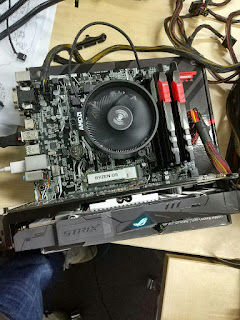 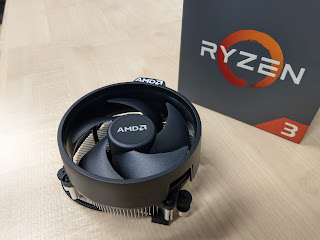 The whole Ryzen lineup of processors are designed to withstand a certain level of overclocking. We managed to push the Ryzen 1300X to 3.95GHz, 250MHz higher than the Turbo Core specifications. Moreover, the 3.95GHz frequency was achieved across all 4 cores concurrently. Do note that these overclocks are accomplished with only the stock cooler. Anything higher, the system will fail to be sufficiently stable enough to run the Prime95 CPU stability test. The RAM frequency also remained at 2933MHz throughout our tests.
In our performance tests below, this overclocked CPU profile will be used. 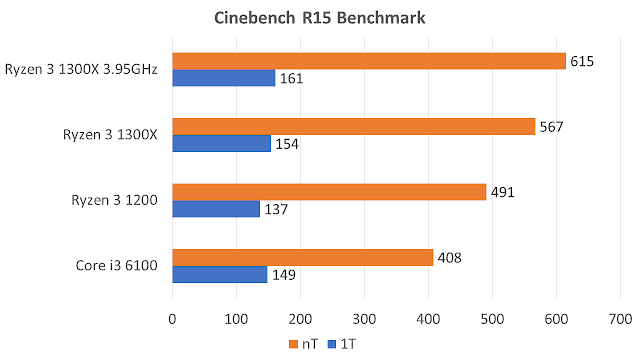 We used Cinebench R15 to gauge the overall performance of the processors. The 2-year-old Intel Skylake processor was still able to hold up and perform slightly better than the Ryzen 3 1200 CPU in the single threaded test. However, it was apparent that a true quad core processor simply performs significantly better than a dual-core 4 logical threads processor. The Ryzen 3 series simply smothers the Intel Core i3 in multi-threaded benchmarks.
Moreover, with the overclock done on the Ryzen 3 1300X, we managed to get an additional 8.5% of performance in multi-threaded applications. This shows that the Ryzen processors can really scale well with clock frequencies, and that these processors can reach even higher performance with higher clocks. 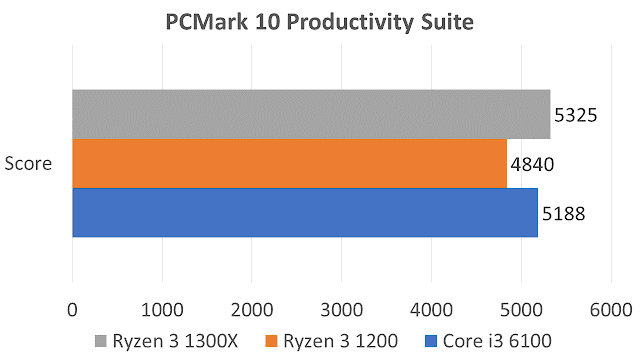 The PCMark 10 Producticity Suite of tests simulates many real-world applications, while benchmarking the system’s performance. It can be seen that the Intel Core i3 6100 has an advantage over the Ryzen 3 1200 because of its higher clocks and better single threaded performance. However, when it comes down to the Ryzen 3 1300X, which holds a higher core frequency than the Ryzen 3 1200, it seems that performance was superior as compared to the Core i3. 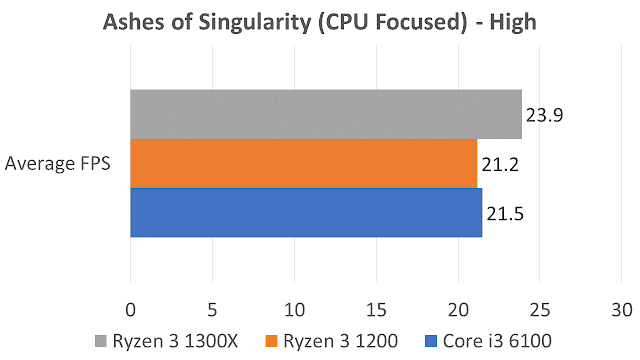 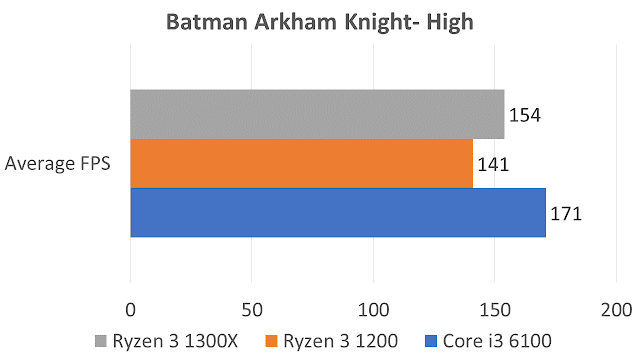 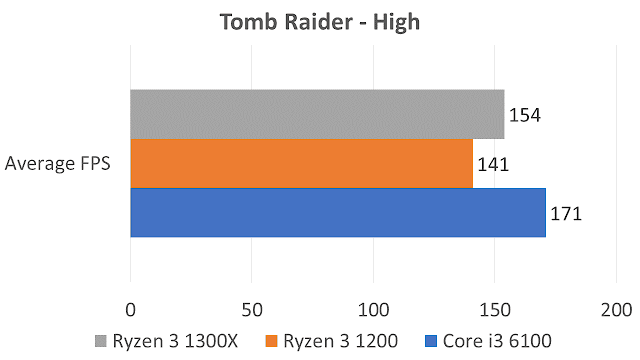 We tested the Ryzen 3 in several modern games as shown above in 1080p resolution. The 1300X managed to hold its own when it comes to even the most intensive games, performing at the minimum requirement of 60 FPS. In games that scale well with more CPU cores, like Ashes of the Singularity: Escalation, the Ryzen 3 1300X performed over 10% better than the Intel i3-6100. However, it is more common for games to perform better with CPUs with a higher IPC. This is evident with the other games that we tested, where the Intel chip performed up to 30% better.
Temperatures
Our temperature tests are carried out with the HWMonitor software application. The temperature records will be taken at both idle and load situations. We will take the idle temperature after 3 minutes from a fresh restart of the computer and the load temperature after 3 minutes after a Prime95 “small FTT” test. It would be interesting to see the actual temperature difference between a true quad core processor and a dual core processor. We will also be able to find out which processor has a better heat dissipation performance with its stock cooling solutions. 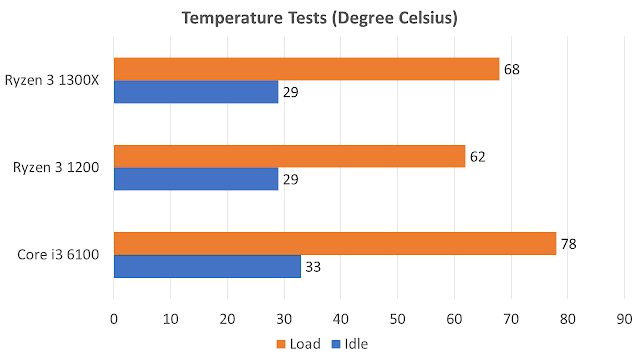 It is interesting to see that despite the Intel Core i3 being only a dual core processor, its temperature under load is higher as the quad core Ryzen 3 CPU. This is likely because of the poor thermal interface material that is used within the CPU package between the CPU die and the heat spreader. This is a known problem with the newer Intel CPUs. On the other hand, thanks to the use of a metal interface within the AMD processor, heat dissipation was considered very effective. Moreover, as AMD has also improved their current heat sink fan design, it is now better in dissipating the heat away from the processor. So, AMD haters… please stop complaining that AMD systems and processors are hot. Times have changed, and now it seems that Intel processors are even hotter than the guys in red. 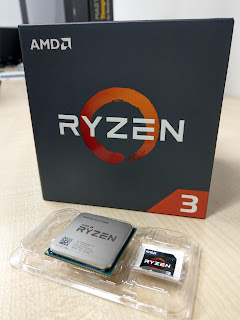 With the results above, there is no clear winner. The i3-6100 performed better when it comes to a majority of the games we tested, while having a toastier idle temperature. Not to mention, it even comes with an Integrated Graphics Processing Unit (iGPU), allowing budget computer builders to save on money that would have been spent on a graphics card. On the other hand, the Ryzen 3 1300X was able to multitask better and performed better on games that favors more CPU cores. However, unlike the i3-6100, it does not feature an iGPU.
It would make sense that if you are building a PC just to surf the web or to do light tasks on it, the Intel i3-6100 would be perfect for you. However, the Ryzen 3 1300X would be a clear choice for PC gamers with a tight budget. Not only will you be able to multitask better, gaming performance is also decent. Additionally, AMD has been working closely with countless game studios to optimize their current and future games. This would result in an improved gaming performance in the long run for Ryzen chips.

The launch of the Ryzen 3 also brings us another step closer a new APU from AMD that is based on the “Zen” architecture. With an integrated Radeon based graphics processing unit within the whole processor package, we hope to see that  APU will make up to the limitations of the Ryzen 3.