HP Inc. has launched an entirely new, cutting-edge and comprehensive portfolio of OMEN by HP gaming products.
Re-designed and re-engineered from the ground up, the new lineup gives eSports athletes and competitive gamers the edge and confidence needed to perform at the highest global level. Every inch inside and out of the new OMEN PCs, displays and accessories are packed with features designed to target the needs of gamers around the world, instantly changing the game like never before.
OMEN by HP will also be teaming up with Blizzard Entertainment to become the official PC of the Overwatch® World Cup.
Other highlights of the new OMEN by HP range includes: 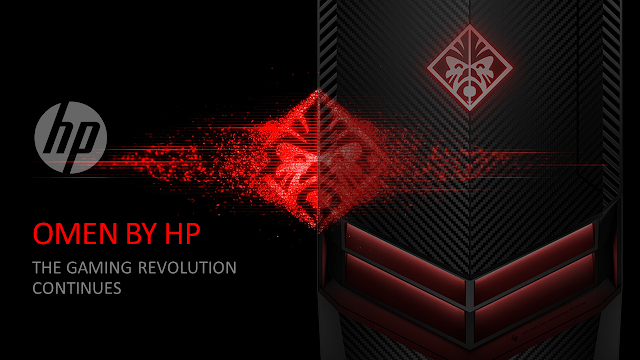 SINGAPORE,
June 8, 2017 – OMEN by HP has been named the Official
PC Partner of Blizzard Entertainment’s Overwatch® World Cup
for 2017, with its OMEN X Desktop PCs  powering
the gameplay for all of the global tournament’s live events – including the
Overwatch World Cup finals at Blizzard’s BlizzCon®
2017 gaming convention.
Inspired by the increasing role of
competition in the modern gaming lifestyle, the OMEN by HP line is built for
today’s gaming community. OMEN by HP is bringing gamers a completely new
portfolio of products this summer, leveraging customer insights from the gaming
community, to give esports athletes and competitive gamers an edge. Along with
reinventing the OMEN portfolio, working with Blizzard Entertainment demonstrates
HP’s focus on the growth of esports globally. The OMEN PCs, displays and
accessories are engineered to optimize competitive gaming and thus, HP is
making investments in the community with its first sponsorship of a major esports
event.
“With the launch of an entirely new, cutting-edge and
comprehensive portfolio of OMEN by HP gaming products, HP is celebrating the
competitive spirit that burns inside all gamers,”said Alex Craddock, global
head of marketing, personal systems at HP. “We’re excited to be working with
Blizzard Entertainment by helping power the gameplay behind the Overwatch World
Cup. HP is dedicating itself to helping grow esports by investing in the
athletes of the future and our partnership with Blizzard Entertainment is a big
step in pursuing that goal.”
“In addition to being
a showcase for some of the top players in the world, the Overwatch World Cup
represents the global spirit at the heart of Overwatch,” said Pete Vlastelica, CEO
of Blizzard Entertainment’s MLG division. “We’re pleased to have HP’s help in
supporting this friendly—and fierce—international competition.”
The Overwatch World Cup is a
global, community-driven competition in which viewer-selected committees from the
32 eligible nations assemble the Overwatch
teams that will represent their countries. Starting this summer, the national
teams will battle at four live events—taking place in Australia, China, Poland,
and the U.S.—with the top eight moving on to compete for ultimate national
pride in the live finals at BlizzCon this November in Anaheim, California.
Visit http://worldcup.playoverwatch.com
to learn more.

HP Inc. creates technology that
makes life better for everyone, everywhere. Through our portfolio of printers,
PCs, mobile devices, solutions, and services, we engineer experiences that
amaze. More information about HP Inc. is available at http://www.hp.com.

Best known for blockbuster hits
including World of Warcraft®, Hearthstone®, Overwatch®,
the Warcraft®, StarCraft®, and Diablo®
franchises, and the multifranchise Heroes of the Storm®, Blizzard
Entertainment, Inc. (www.blizzard.com), a division of Activision Blizzard
(NASDAQ: ATVI), is a premier developer and publisher of entertainment software
renowned for creating some of the industry’s most critically acclaimed games.
Blizzard Entertainment’s track record includes twenty-one #1 games and multiple
Game of the Year awards. The company’s online-gaming service is one of the
largest in the world, with millions of active players.