A Look into the Evolution and Future of Mobile Messaging

Home » A Look into the Evolution and Future of Mobile Messaging

Technology Shaping a New Generation – The Birth of Free Mobile Messaging
Launched October 2011
For LINE’s 218 million monthly active users[1], staying connected with family and friends is now
just a free voice call or chat away! It’s also secure – LINE calls and chats
are encrypted end-to-end by default. LINE also has functions built in that
enrich the chat experience, like translator chat bots that can be added to
group chats to automatically translate text into English, Chinese, Korean and
Thai.

Stickers – A New Way of Communicating
Launched October 2011
LINE was one of the first messaging apps to launch stickers and change the game, giving users a new way to communicate. With over 258,000 sets of stickers currently on sale, stickers are one of LINE’s biggest revenue drivers. In Singapore, seasonal stickers for National Day and Chinese New Year or special Singlish-themed stickers also allow us to express our unique local style!

LINE Creators Market – How Messaging Apps Make Money
Launched April 2014
Going beyond mobile messaging, LINE Creators Market is a full-fledged
business where users can make and sell their own stickers and themes directly
through the LINE app. With this, budding artists now have an outlet to express
their creativity as well as an alternative revenue source. 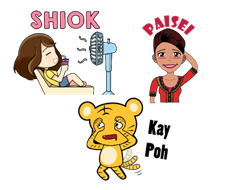 Promoting the Creative Economy: LINE’s Search for Singapore’s Next Young
Sticker Artist
Launched October 2016
LINE held its first-ever nation-wide Sticker Design Competition in
Singapore in October 2016,a first in Singapore by the brand to promote and
reward budding creative talent. Art school students had the chance to learn the
ins-and-outs of designing for a mobile platform, expand their portfolio and
even win prize money. In total, sticker sets designed as part of the
competition garnered over 300,000 downloads. 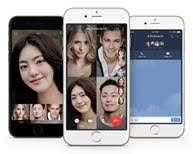 Advancing the Game: Security, Privacy, Seamless Integration
Launched December 2016
Most chat apps offer voice and video calls for both group and single
chats, but LINE took it a step further with group video calls for up to 200
people at once. Everything from business conference calls to personal chats
with friends all over the world is now possible. The connection is also secure,
fast and reliable – no more pixelated faces! 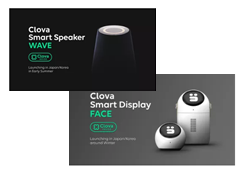 Clova – a Digital Assistant for the Future
Announced March 2017
LINE’s foray into the world of artificial intelligence (AI) starts with
Clova, a cloud virtual assistant with the naturalism, functionality and
interconnectivity to make it fully integrated into everyday life. The smart
speaker Wave and smart display Face will allow users to interact with it in a
natural way, using realistic language and speech.
About LINE Corporation
Based in Japan, LINE Corporation (NYSE:LN/TSE:3938) is dedicated to the
mission of “Closing the Distance,” bringing together people, information, and
society. The LINE messaging app was launched in June 2011 and has since grown
into a diversified global platform, operating a range of services and contents.