THE NEW RULES OF TV: NETFLIX MEMBERS DECIDE THEIR OWN SCHEDULE

Home » THE NEW RULES OF TV: NETFLIX MEMBERS DECIDE THEIR OWN SCHEDULE

THE NEW RULES OF TV: NETFLIX
MEMBERS DECIDE THEIR OWN SCHEDULE
·
When
viewers have the power to watch what they want, TV schedules don’t look like
they used to
·
Turns
out supper isn’t the only thing Singaporeans enjoy late at night – but
binge-watching too 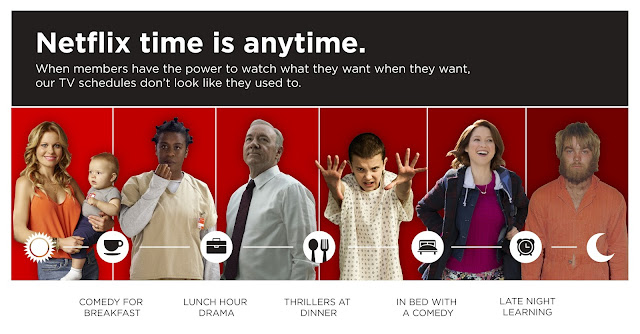 Singapore (May 23, 2017) — When Netflix introduced its shows with all episodes at
once, it broke the industry mold, and viewers are changing the
nature of TV. From the characters we choose to
wake up with, to what we watch in bed, when viewers have the power
to program their own day, TV watching no longer looks the same.
“For years our lives had to fit around television, now it’s the
other way around,” said Cindy Holland, Vice President of Original Content.
“We’ve given consumers control and it’s interesting to see the behaviors that
emerge when viewers aren’t tied to a schedule. And even more so to see that
these routines are replicated by millions the world over.”
For Singaporeans, late nights are for supper and
binge-watching. Viewers fit TV watching around their daily lives, rather than the
other way around, so we see peak streaming as late as 10PM in
Singapore, South Korea and Malaysia.
Comedy for breakfast – viewers feel at home
starting their day with Fuller House (and kopi). While you might not
expect popular parodies to stir laughs bright and early, around 6AM, members are 34% more likely to watch
comedy compared to the rest of the day, with the new comedy wake-up block
including the likes of Bojack Horseman, Stephanie Tanner (Fuller House)
and Jane Villanueva (Jane the Virgin).
High noon, high drama – members pay a visit to the ladies of
Litchfield at lunch. When viewing schedules
are set by people and not programmers, lunchtime becomes no binging exception.
Across the world, drama accounts for nearly half (47%) of viewing between noon
and 2PM (an increase of 5% compared to the rest of the day) to the likes
of Orange is the New Black, Narcos and Sherlock. Midday streaming is especially
prevalent in Brazil where members are 25% more likely to watch at this time
compared to the rest of the world – who says drama series are strictly evening
fare?
Taking the Netflix binge on the road – members in India catch up
on House of Cards during their daily commute.
Workers in India are kicking off the daily grind with characters like Frank and
Claire Underwood from House of Cards, and Harvey and Mike from Suits keeping
them company when stuck in bumper-to-bumper traffic. Compared to the rest of
the world, India is 82% more likely to stream at 9AM. A behaviour that
continues on the 5PM ride home too with the same binge-worthy drama
titles.
Opposite genres attract when we watch in bed – members trade the
Demogorgon for Kimmy Schmidt. It’s no surprise
thrillers like Stranger Things and Breaking Bad are
being enjoyed in the evening – globally the genre sees a 27% increase come9PM.
But viewers are kicking Walter White and The Demogorgon out of bed and
restoring balance with partners like Kimmy Schmidt (Unbreakable Kimmy
Schmidt) and Dave Chappelle before they hit the hay – apparently members
around the world choose to start and end their day with a
laugh.
Late nights are for learning – watchers prefer Chef’s
Table as a midnight snack. Globally,
15% of streaming happens between midnight and 6AM and even rises as
high as 21% in Japan and South Korea. And what these night owl members are
watching is not what you think – documentaries see a 24% increase in viewing
during this time, including titles like Abstract, Making a
Murderer and Planet Earth. The pursuit for quality
entertainment (and knowledge) doesn’t dim when the lights go out.
When it comes to defining the new ‘rules’ of TV
watching, Frank Underwood said it best: “If you don’t like how the
table is set, turn over the table.”
*METHODOLOGY
Six months of Netflix streaming data was used
for this analysis to draw time of day insights on the following countries:
Argentina, Australia, Brazil, Canada, Colombia, Germany, Spain, France, United
Kingdom, India, Italy, Japan, South Korea, Mexico, Malaysia, Netherlands, New
Zealand, Philippines, Poland, Portugal, Singapore, and United States. Peak
viewing hours were identified based on weekday viewing as well as the hours
certain genres peaked in relation to the genre’s overall share of daily
viewing. Where relevant, data was adjusted to account for timezones.