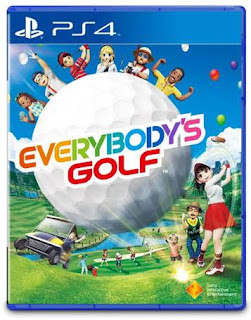 Singapore, 12th May
2017 – Sony
Interactive Entertainment Hong Kong Limited Singapore Branch (SIES) announced
today that the localized version of PlayStation®4“Everybody’s
Golf” will be released on 29th August,
2017 (Tue). The suggested retail price of Digital Deluxe Pack
will be SGD 73.90, Download Standard version will be SGD 46.90 and
SGD 49.90 for Blu-ray Disc version.
About PS Store Pre-order ＆ Early Purchase Special Offer
Digital pre-order will start from 12th May
(Friday) on PlayStation®Store. Customers who pre-order or purchase Digital Deluxe
Pack before 11th September (Mon) will receive a
special discount. Customer who pre-order or purchase at PlayStation®Store can also receive Bonus as below:
・PS4 Theme ※Pre-order Bonus
・Costume (Rabbit) ※Pre-order & Early
Purchase Bonus
Pre-order Period：12th May,
2017 to 28th August, 2017
Early Purchase Period：29th August, 2017 to
11th September, 2017
Website: https://playstn.asia/SG_EGPreorder
About a Closed Online
Test:
Entry to the
Closed Online Tests is starting from today.
“Everybody’s Golf” is the
latest series of the super popular golf game. A closed online test will be held
from 26th to 28th May to let players experience ‘Everybody’s Golfer’ in expansive
open courses with other players from all around the world.
Application Period: 12th May, 2017
(Fri) – 21st May, 2017
(Sun)
Closed Online Test
Period: 26th May, 2017 (Fri) – 28th May, 2017 (Sun)
Website: https://playstn.asia/EGCloseBeta
※Please note that the closed online test
schedule may change without notice.
※Participants will be chosen randomly.
About “Everybody’s
Golf”:
The latest of the
super popular golf game is coming to PlayStation®4! Experience the
excitement, exhilaration and the amplitude of golf!
A golf entertainment
that allows players to enjoy their “Everybody’s Golfer” life in the
series first ever massively wide open course!
“Challenge Mode” tournaments that
allows players to play with the characters in the game or practice a
difficult course by themselves in “Play Alone” and improve their My Character and challenge
many different types of courses! On the Open Course, players all around the
globe are challenging one another to test their own skills. Challenge other
players around the world with My Character and have fun playing New Everybody’s GOLF! Also, on “Everybody’s Golf”, players can play with up to 4 players max with just
one controller. Let’s have an exhilarating golf experience with
friends and families!
Product Outline:
©Sony Interactive Entertainment Inc.

Commentary from Darktrace on NUS and NTU breaches in Singapore