With the success of their Pascal architecture, NVIDIA has
opened themselves to the opportunities and business of Virtual Reality (VR).
They have been investing a lot of research and development in this area, and
trying to find and try out more applications for VR. 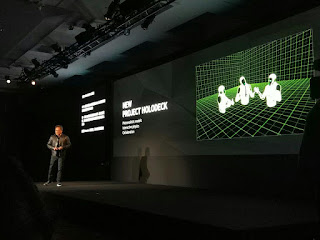 To get started, they have initiated Project HoloDeck.
Project HoloDeck is a virtual reality environment that obeys to the laws of
physics. This has brought the simulation of a real world to virtual space. In
this public first iteration, Project HoloDeck also supports multi-user mode.
Essentially, users simultaneously interact with on another within a single and
unified virtual world. This allows the possibilities of collaboration. This new
VR space also supports the inclusion of photorealistic 3D models. We can see
that NVIDIA trying to perfect the creation of an alternate world in the virtual
reality space.
“A real world in a virtual world”
HoloDeck can open up different opportunities in different
industries. By simulating the real world, many other use cases and applications
are borned. For example, the software can be used by a marketing/sales team to
showcase and explain their products. With VR, customers can know a lot more
information from a product by immersing themselves in a VR environment.
HoloDeck can also be used by teachers in the education sector. Students can be
brought into HoloDeck’s virtual space with their teachers. Teachers properly
explain concepts with proper examples and environment in the virtual space,
thus enhancing the quality of education that students get.
It seems that the concept of Japanese light novel series
Sword Art Online is becoming a reality. Despite it being a fictional story, it
seems that such concepts that were once deemed as impossible are starting to
become possible with the advancements in GPU technology.
Here is a video of Founder and CEO of NVIDIA, Mr Jensen
Huang, introducing the new NVIDIA Project HoloDeck.

Lenovo sets the bar for cutting-edge mobility and style