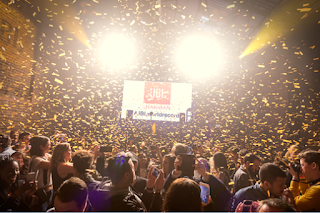 03 MAY 2017, SINGAPORE – HARMAN International Industries, the premier connected technologies company for automotive,
consumer and enterprise markets, today announced that the company’s JBL audio
brand is now a GUINNESS WORLD RECORDS title holder. After
successfully playing 1,000 Flip 4 Bluetooth speakers simultaneously from a
single media source, JBL smashed the previous record (of 208 speakers) set by
Ultimate Ears in 2016.
Taking
place at an exclusive event in London’s Village Underground on 25 April 2017,
together with telecommunications service provider O2 –
the record was witnessed by over 200 guests including world-renowned Dutch DJs,
Sunnery James and Ryan Marciano.
With
the speakers displayed on a circular structure to create a 360-degree wall of
sound, other highlights from the evening included numerous live acts and an
exclusive soundtrack featuring all of JBL’s current music ambassadors (which
include Demi Lovato, DNCE, Tinie Tempah and Quincy
Jones.).
Carsten
Olsen, Vice President & General Manager Harman Consumer Lifestyle EMEA,
comments, “JBL’s music heritage has ensured that both our CONNECT+ technology
and recently launched Flip 4 are superior offerings within the market. It
therefore, only seemed fitting to celebrate both with a landmark event that has
secured our place in GUINNESS WORLD RECORDS history.
“We
are a brand that thrives on innovation and also love to party so it was great
to celebrate in style last night with industry members, press, fans,
ambassadors and retail partners. The event was the perfect kick off for our
jam-packed calendar of live events taking place throughout 2017.”
Jack
Brockman, Official Adjudicator from GUINNESS WORLD RECORDS added
“It’s important to recognise and reward great achievements whether they have
been undertaken by an individual, community or large corporation. The GUINNESS
WORLD RECORDS actively encourages their partners to creatively
visualize, challenge and achieve their full potential, we applaud JBL for
embracing this ethos by greatly surpassing the previous record. Playing 1,000
speakers simultaneously makes quite an imposing sound, it was certainly the
highlight of an impressive evening.”
Designed
for party starters and globetrotters alike, the new adventure-proof Flip 4
speaker with in-built CONNECT+ technology is the latest product to join JBL’s
popular Flip range that has sold 10 million
speakers to date.
Check
out the #JBLWorldRecord event via our Facebook video post: https://www.facebook.com/JBLUnitedKingdom/videos/753256948167061/.
JBL Flip 4 is
set to hit the stores in Singapore soon!