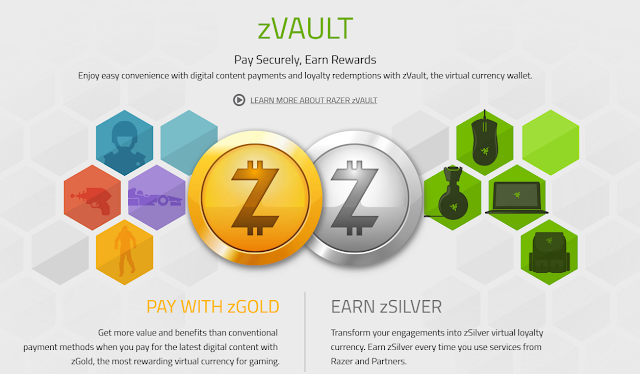 IRVINE, Calif. – RazerTM, the leading global lifestyle brand for gamers, today
announced plans to make its zVault virtual currency platform the preferred
payment solution for gamers to use online for purchases and in-game
transactions. The proprietary monetary system is based on zGold units, with
a conversion rate at launch of 100 zGold:US$1.
“The introduction of
zVault is all about giving value to gamers with secure payment convenience and
a great rewards program,” said Min-Liang Tan, CEO and co-founder of Razer.
“This is much more than a club or credit card perks program or
micro-transaction solution. Our ultimate vision is a complete gamer economy expanding from the
zVault ecosystem. It’s social, interactive and truly useful, opening the doors
to a safer way of doing business and an expansive rewards market for our fans.”
Razer’s zVault is a
secure digital wallet for gamers with virtual currencies for payments and
rewards. Razer zVault patrons may securely pay for digital items using zGold,
while earning zSilver currency
from purchases made using zGold, and through Razer software use, such as Razer
Cortex and Arena.
Razer’s virtual
currency platform is accessible to Razer ID holders at https://zvault.razerzone.com. There are more than 22 million registered Razer ID users
presently.
On the zVault website, users can browse content and exclusive
purchase offers, as well as rewards available for redemption using zSilver.
Users can replenish their wallets by acquiring zGold packs on the site, which
can be purchased in 3,000, 5,000 and 10,000 denominations using PayPal, major
credit cards, Openbucks or Paysafecard.
Free-to-play games
developed by Hi-Rez Studios (“SMITE,”
“Paladins”) and Smilegate West (“CrossFire,” “Lost Saga”) are currently accepting zGold. Game stores
such as IndieGala andGamersGate have also collaborated with Razer zVault in expanding
their payment offerings, allowing gamers to purchase games in the form of Steam
keys.
Osama Deeb, Smilegate
West’s global payments and partnerships lead, said: “Smilegate West is delighted to increase the
mutually beneficial collaboration with Razer and making our product catalog
available to an even wider audience than before. As a gamer-focused payment option, Razer zGold
will allow Smilegate West to tap into more than 22 million gamers that are
already part of the Razer network.” Smilegate West is accepting zGold on its
online portal Z8Games. Z8Games currently hosts “Lost Saga,” a free-to-play 3D
fighting game, and “CrossFire,” which is the world’s most popular online
first-person shooter with over 400 million registered users.
In the near future, Trion Worlds will also be integrating zGold as a
payment option into its six game titles.
“Trion and Razer’s
audiences are one and the same: tens of millions of dedicated gamers around the
world,” said Scott Hartsman, CEO of Trion Worlds. “It makes perfect sense
to expand our amazing partnership with Razer to include the zVault payment and
rewards program. We love finding great new ways for our players to earn
additional rewards.”
To celebrate the
official launch of zVault, Razer is offering benefits to Razer ID users for a
limited time: a starter gift
pack of Bonus 2,000 zSilver; up to 30 percent additional Bonus zGold after
users top up their wallet for a limited time only, more ways to earn zSilver,
and reap discount offers, bonus in-game items for selected purchases using
zGold.

The new McLaren 720S comes to Project CARS 2 first for PS4, Xbox One and PC