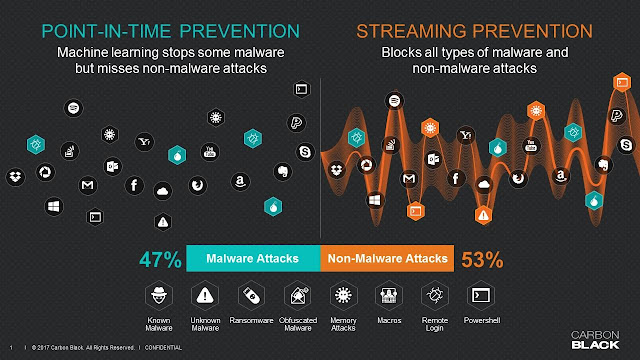 SINGAPORE — February 7,
2017—Carbon
Black, the leader in
next-generation endpoint security, today unveiled “Streaming Prevention,” a
cybersecurity technology that redefines the Next-Generation Antivirus (NGAV)
market by combining a breakthrough prevention model with market-leading
detection and response to stop both malware and non-malware attacks.
“Streaming Prevention”
is the core technology powering Cb Defense, Carbon Black’s NGAV solution, which
can prevent, detect and respond to the most advanced cyber attacks, including
non-malware attacks.
Non-malware attacks gain
control of computers without downloading malicious software. Instead, they use
trusted, native operating system tools, such as PowerShell, and exploit running
applications, such as browsers, to “live off the land.” These attacks pose a
bigger risk than malware attacks because they are harder to detect and cause
more damage. Virtually every organization was targeted by such an attack in
2016, according to Carbon Black research.
In protecting against
non-malware attacks, “Streaming Prevention” is a fundamentally different
approach to endpoint prevention than taken by Cylance, McAfee, Symantec and
other antivirus (AV) vendors.
Streaming Prevention
Carbon Black’s
“Streaming Prevention” technology can prevent both malware and non-malware
attacks by leveraging event stream processing, the same technology that
revolutionized algorithmic day-trading. Similar to algorithmic day-trading
applications, “Streaming Prevention” continuously updates a risk profile based
on a steady stream of computer activity. When multiple, potentially malicious
events occur in succession, “Streaming Prevention” blocks the attack.
This breakthrough in
prevention leapfrogs machine-learning AV, which focuses exclusively on files
and does nothing to target an attacker’s behaviors, which often include
leveraging trusted applications to “live off the land” to remain undetected.
Legacy AV solutions and
static, machine-learning approaches focus on detecting malware at the
point-in-time it is written or executes. In contrast, “Streaming Prevention”
empowers security teams to see and stop a cyber attack at any point during the
attack cycle, well before a system can be compromised.
Cb Defense customer,
Fuli Chavez, Sr. Security Operations Analyst at DA Davidson: “‘Streaming Prevention’ is a game-changing
technology. By combining NGAV with market-leading detection and response
technologies into a single agent, Cb Defense protects our organization from the
most advanced cyber attacks, including non-malware attacks. The solution can be
deployed within minutes from the cloud or management systems and is virtually
invisible to our end-users.”
“Carbon Black is
continuously innovating to stay at the forefront of cybersecurity, and we have
a long history of helping organizations all over the globe protect their
endpoints,” said Patrick Morley, Carbon Black’s president and chief executive
officer. “‘Streaming Prevention’ marks a significant breakthrough in the NGAV
market. With Cb Defense, our customers can confidently replace legacy antivirus
and achieve a level of endpoint protection that redefines what it means to be
‘safe.’”
Cb Defense’s
Market-Leading Detection and Response
As founder of the
endpoint detection and response (EDR) market, Carbon Black brings world-class
detection and response capabilities to Cb Defense. Cb Defense combines
prevention, detection and response into a single offering, giving security
teams complete visibility over their enterprises. Cb Defense captures all
endpoint activity to feed automated threat-hunting algorithms and detect
threats using intelligence from the Carbon Black Collective Defense Cloud.
With Cb Defense, security teams can
visualize an attack’s full “kill chain” to understand what’s happening every
step of the way, making response and remediation faster than ever before.
Cb Defense’s market-leading
detection and response offer:
Attack Stream Visualization – Investigate an attacker’s origins, motivations and
tactics with intuitive visual mapping.
Root-Cause Analysis – Uncover the root cause of an attack in minutes and close
security gaps instantly.
Automated Threat Hunting – Conduct automatic threat hunting across an enterprise by
combining captured endpoint activity with aggregated threat
intelligence from the Carbon Black Collective Defense Cloud.
One Agent, One Console,
Cloud Delivered
Cb Defense’s
breakthrough prevention technology, “Streaming Prevention,” combines with
market-leading detection and response in a single agent and is viewed in a
single console. Cb Defense is delivered via the cloud, so there are no hardware
or storage costs. The solution deploys in 15 minutes.
Lightweight and Easy
Cb Defense has virtually
no impact on systems and users, occupying less than one percent of CPU and less
than one percent of disk.
Cb Defense’s new,
powerful UI gives teams complete control over their security, immediate access
to what needs attention, and a view into what attacks were recently stopped.
Simple dashboards highlight the most pertinent issues.
For more information,
visit ngav.carbonblack.com 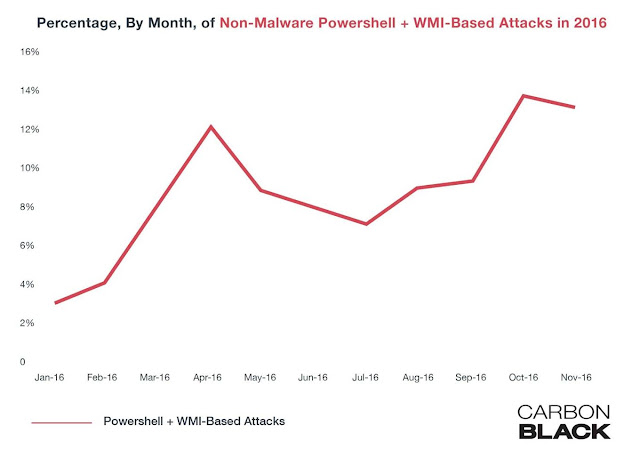