NCSoft Announces the Launch of Lineage Red Knights
NCSoft
Forming a team of cute
fantasy monsters inspired from Lineage, a critically acclaimed massive
multiplayer online game, to explore tons of exciting environments and dungeons?
Sign me up!
NCSoft officially released
its new mobile role-playing game “Lineage Red Knights” to the Asian market
consisting of Korea, Taiwan and 12 South East Asian
countries on the 8th of December.
They have their sights on welcoming back longtime fans of the original
“Lineage” franchise as well as mobile gamers unacquainted with the Lineage
universe. 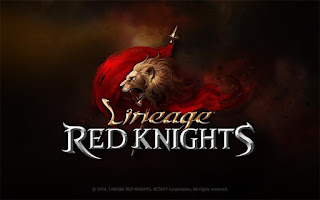 Lineage Red Knights, as
suggested, is based on “Lineage”, NCSoft’s widely acclaimed multiplayer online
role-playing game which was introduced to the world in 1998. With the success
of Lineage, NCSoft has since become one of Korea’s biggest game developers.
Utilizing Lineage’s
extensive volume of content from being in service for 18 years and counting,
Lineage Red Knights is NCSoft’s first mobile RPG that is aimed towards being
more mobile friendly. Sim Seung-Bo, Senior Vice President of Publishing, NCSoft
provides us more insight on their approach,
In “Lineage Red Knights,” flagship monsters from the original game
appear as small and chubby animated characters to appeal to a broader audience.
A user becomes a part of the “Red Knights” to save the world of Aden from
destruction.
With this more casual and
cute take on the otherwise hard fantasy universe of its predecessors, the game
will certainly will provide a sense of nostalgic yet refreshing charm for
players new and old.
Lineage Red Knights has performed very well
since its launch on the 8th of December. Within a day, it managed to clinch
first place on the iOS Top Grossing Rank in South Korea. It also performed
spectacularly on the Google Play Store, reaching 1st place in Google Play Store
South Korea in 3 days and 6th place in Google Play Store Taiwan in 6 days.
Key
Features
In Lineage Red Knights, the mobile RPG
offers you the experience of collecting and developing your own unique deck of
pets familiar to the Lineage universe. The array of cute pets have their own
stories and unique qualities and will join the players on their journey through
the game.
Currently almost 60 pets have been released
and there are a plethora of pets to look forward to in future updates. Players
can choose to go about their hunts normally or order their pets to go on
quests. 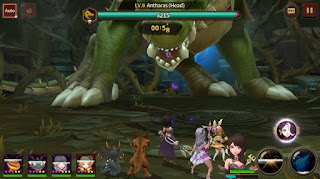 Lineage Red Knights: Battle with your pets!
Players looking for a challenge have the
ability to engage in PVP with other power hungry competitors. Come up with the
best pet line-ups and decks with the various classes and myriad of active and
passive skills that are available to you in the form of your pets. The
competitive content is geared towards providing a differentiated in-game
experience from solo play. 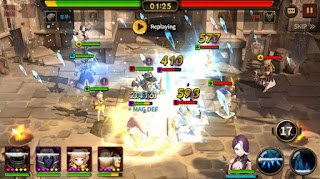 Lineage Red Knights: PVP Battle
The intensive ‘Guild’ system, acclaimed by
original Lineage users, is back in Red Knights as well. More than 20,000 Guilds
have been created during the guild pre-registration event in South Korea and
many more are being created everyday.
The Guild system allows players to
communicate with each other to better set up their strategies for conquering
Fortresses which will eventually lead up to Siege Wars (taking over territories
for greater rewards).
Guild tokens are given through Guild
participation, and they can be useful for purchasing unique items in the Guild
Shop. 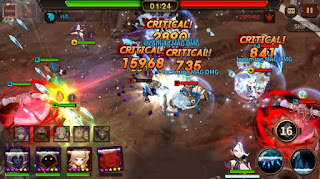