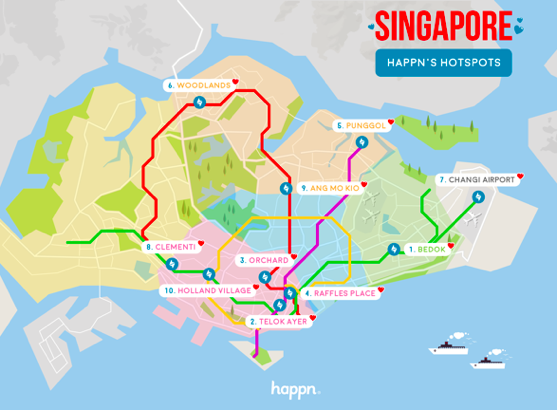 Singapore, Thursday, 27th October 2016 – happn, ‘the first dating app that finds the people you’ve crossed paths with’, has revealed the top ten hotspots for Singaporeans to create dating serendipity in the city.
Unlike other dating apps, the happn experience starts in real life. The app’s real-time geolocation shows users the people they cross paths with within a 250 meters radius and keeps encounters memorised to connect on the spot or later on – giving a second chance at a first encounter.
The top ‘hotspot’ for dating hopefuls to cross paths and gain opportunities to date has been revealed as the residential area of (#1) Bedok and neighbouring district Katong – with 10 percent of all crossings taking place in the Eastern heartland.
Coming in at #2 is Singapore’s hottest new area for bars and restaurants, Telok Ayer, and its surrounding streets on the outskirts of the Central Business District. Telok Ayer scored 9% of the dating app’s total amount of crossings, giving more than 160.000 opportunities for dates.
The #3 and #4 spots are taken by Orchard, the island’s prime shopping district, and Raffles Place, the heart of Singapore’s financial and business centre respectively; with both areas achieving an equal 8 percent of the total amount of crossings, or dating opportunities.
Further results reveal a significant number of crossings taking place in the heartlands with a high density of residential population, including #5 Punggol (6 percent), #6 Woodlands (5 percent), #8 Clementi (5 percent), #9 Ang Mo Kio (4 percent) and #10 Holland Village (3 percent).
Changi Airport is placed at #7 spot, with users crossing 84,862 times due to the constant traffic with locals and travelers passing through Singapore.
Taking an overview on the zonal districts of Singapore, reigning at the top of the chart are the Central and CBD areas with 34 percent (close to 700.000) of crossings, closely followed by the Eastern and Northeast districts with 24 percent (437,491).
While the list of ‘hotspots’ could bring on opportunities to initiate dates in advance, it can also be used as a meet-up feature, exclusive to happn. Aptly called “See You There”, happn prompts users to meet up for social activities, extending the happn user experience to reality.
Here is a list of the Top 10 happn “hotspots” in Singapore:
1. Bedok – 10%
2. Telok Ayer – 9%
3. Orchard – 8%
4. Raffles Place – 8%
5. Punggol – 6%
6. Woodlands – 5%
7. Changi Airport – 5%
8. Clementi – 5%
9. Ang Mo Kio – 4%
10. Holland Village – 3%