Set the Pace with #SingaporeGP on Twitter This Weekend

Home » Set the Pace with #SingaporeGP on Twitter This Weekend

Set the Pace with #SingaporeGP on Twitter This Weekend
The Twitter #SingaporeGP Guide shows fans how  drivers and teams
connect with their fans before the F1 Night Race
Singapore, 16 September 2016 – Starting today and over the weekend, Singaporeans and F1 fans will flock to the Marina Bay Street Circuit to witness the thrilling Singapore Grand Prix action as well as participate in the entertainment spectacles that come along with the F1 circuit. Join the global conversation on Twitter via the official hashtag#SingaporeGP which already has over 170,000 Tweets so far since Monday this week: 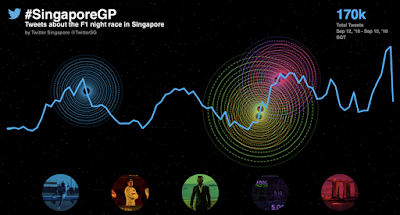 One of the most widely shared Tweet about #SingaporeGP this week comes from @LewisHamilton who Tweeted a motivational quote ahead of his race this weekend. We do not expect anything less than the best from this member of Team Mercedes! 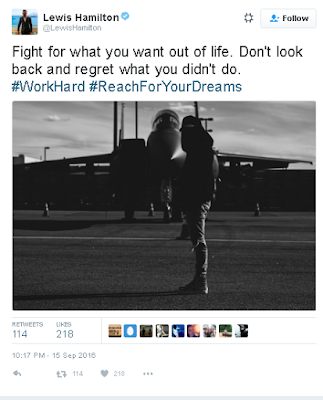 Embeddable Tweet: https://twitter.com/LewisHamilton/status/776424590520225792
Those wanting a front-row seat to the Singapore Grand Prix will know that Twitter is the place to get breaking news about the F1’s only night race, to connect with other passionate racing fans, and to show their public support for their favourite F1 drivers and teams. Whether you’re catching the action from the comfort of your home or right at the edge of the tarmac, follow @F1NightRace, the F1 teams and drivers on Twitter to get closer to the action than ever before.
Ahead of the #SingaporeGP, these are the top 10 mentioned  F1 drivers on Twitter, ranked in a starting grid based on who many times Twitter users have Tweeted about them this year:
1.    Lewis Hamilton (@LewisHamilton)
2.    Fernando Alonso (@alo_oficial)
3.    Nico Rosberg (@nico_rosberg)
4.    Jenson Button (@JensonButton)
5.    Max Verstappen (@Max33Verstappen)
6.    Kimi-Matias Räikkönen
7.    Sebastian Vettel
8.    Daniel Ricciardo (@danielricciardo)
9.    Sergio Perez (@SChecoPerez)
10.  Felipe Massa (@MassaFelipe19) 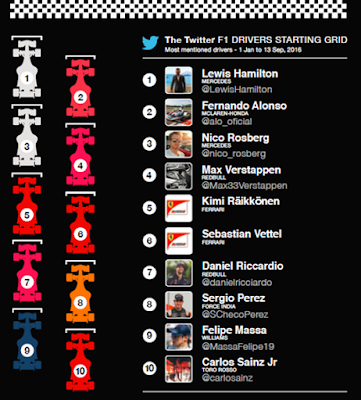 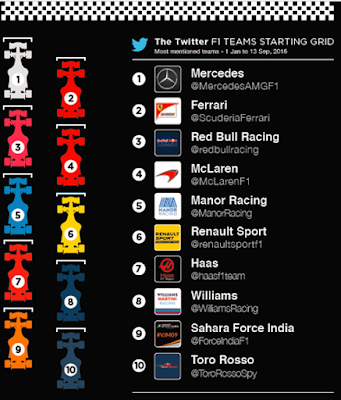 Here is how the teams and their drivers are using Twitter to rev fans up ahead of Sunday night’s race:
Mercedes F1 Team’s Nico Rosberg (@nico_rosberg) gamely posed for a we-fie at a street hawker stall. 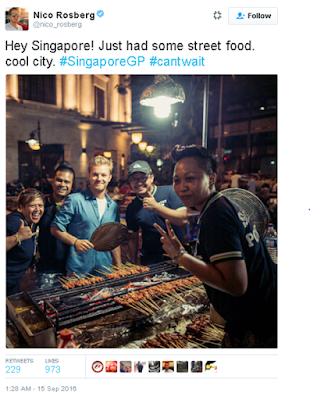 Embedded Tweet: https://twitter.com/nico_rosberg/status/776110397619179520
Team Manor Racing decided to brave the daytime heat and took the opportunity to explore the sights of Singapore. 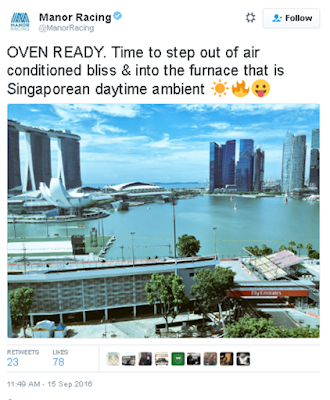 SYFY TEAMS UP WITH SAMSUNG TO BRING THE GROUND-BREAKING HYBRID VR SERIES, HALCYON