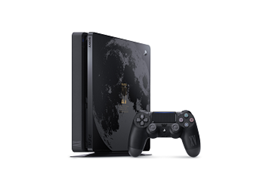 With a unique moon design — which is a key motif of Final Fantasy XV — printed on  the black underlying surface of the smaller and lighter PS4™ (CUH-2000 series), this beautifully designed PS4 will sport a slightly different look at different angles. The main logo of the game is also placed in the centre of the design, alongside the names of the 4 main characters printed in bright gold. Furthermore, the grip of the bundled new DUALSHOCK®4 wireless controller will have also have a royal grey logo. In its entirety, the design underlines the dignity and royalty of the Kingdom of Lucis, where the protagonist, Prince Noctis, hails from.
The FINAL FANTASY XV game software, which is also included in this set, will have an overwhelming worldview created with the fusion of reality and fantasy, as well as adopting for the first time in FINAL FANTASY series an “Open World” gameplay format. By introducing a highly action based battle system into the game, the player will further get immersed into this world and feel greater freedom and a sense of reality from the gaming experience.
SIES is dedicated in bringing the best gaming experience to all PS4™ users, and further enhancing and promoting the PS4™ platform.
PlayStation®4 FINAL FANTASY XV LUNA EDITION Product Information [Limited Quantity]
FINAL FANTASY XV Product Information
*1 The vertical stand in the image is the Vertical Stand (CUH-ZST2) which is sold separately.
*2 The product code is valid until 29th September 2018. Connecting to an internet environment and a Sony Entertainment Network account is necessary in order to use this product code.
※ ”PlayStation”, ”PS4” and  ”DUALSHOCK” are registered trademarks or trademarks of Sony Interactive Entertainment Inc.
※ ”Sony Entertainment Network” is a trademark of Sony Corporation.
※ The terms HDMI and HDMI High-Definition Multimedia Interface, and the HDMI Logo are trademarks or registered trademarks of HDMI Licensing LLC in the United States and other countries.
※ FINAL FANTASY XV, the FINAL FANTASY XV logo, FINAL FANTASY, SQUARE ENIX and the SQUARE ENIX logo are trademarks or registered trademarks of Square Enix Holdings Co., Ltd.
※ All other product or company names are trademarks or registered trademarks of their respective owners.