MAKE YOUR MARK IN EA SPORTS FIFA 17 AVAILABLE NOW WORLDWIDE
A Record 8.8 Million Fans Played the Pre-Season Demo Over the Course of 10 Days on Console and PC 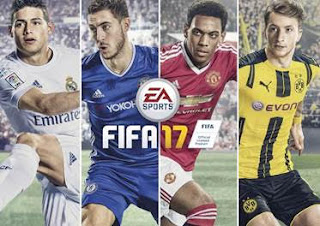 SINGAPORE – September 29, 2016 – Today Electronic Arts Inc. (NASDAQ: EA) launched its most anticipated sports game to date, EA SPORTS™ FIFA 17 worldwide on Origin™ for PC, Xbox One, PlayStation®4, Xbox 360, and PlayStation®3. For the first time, FIFA 17 is powered by Frostbite™*, one of the industry’s leading game engines. Frostbite delivers authentic, true-to-life action, takes players to new football worlds, and introduces fans to characters full of depth and emotion. Also new this year is FIFA 17 The Journey*, where fans can experience their story on and off the pitch as Alex Hunter, the Premier League’s next rising star. UPROXX calls The Journey “The most compelling feature FIFA has included in years,” while Game Informer concludes, “FIFA 17 has something for everyone.”
“This is truly a special year for FIFA,” said David Rutter, GM and Executive Producer of FIFA 17. “We’re delivering a brand-new engine, and brand-new mode and so much more. It’s incredible all the things our team were able to include in this year’s edition, and we’re ready for our fans to get out on the pitch and experience it for themselves.”
This year is also the biggest season yet for FIFA Ultimate Team™, introducing new Squad Building Challenges and a new way to compete via FUT Champions*. Squad Building Challenges ask fans to complete special themed challenges such as teams composed of players from the same nation or league. Completing squads will reward players with in-game rewards, and additional challenges will be added throughout the season.
FUT Champions allow players to compete for a chance to qualify in the Weekend League, as well as monthly leaderboards**. Higher placement leads to bigger in-game rewards, and consistent eligible top-performers may have the opportunity to compete*** in the FIFA Interactive World Cup and the EA SPORTS FIFA 17 Ultimate Team Championship Series****.
In gameplay, FIFA 17 delivers complete innovation in the way players think and move, physically interact with opponents and execute in attack. Significant new gameplay features including Set Piece Rewrite, Physical Play Overhaul, and Active Intelligence System will put fans in complete control to own every moment on the pitch. Fans can learn more about new gameplay features of FIFA 17 by visiting FIFA 17’s website, and becoming an EA SPORTS FIFA Insider (http://easports.com/fifa). Fans can also join the EA SPORTS FIFA community on http://www.facebook.com/easportsfifa and follow us on Twitter @easportsfifa and Instagram. The game is rated General by the Media Development Authority of Singapore.
For FIFA 17 assets visit: info.ea.com.
FIFA 17 is developed by EA Vancouver and EA Romania and is available now in Asia and worldwide on September 29 on Origin for PC, Xbox One, PlayStation 4, Xbox 360 and PlayStation 3.
*FROSTBITE GAME ENGINE TECHNOLOGY, THE JOURNEY AND FUT CHAMPIONS ARE AVAILABLE ON XBOX ONE, PLAYSTATION 4 AND PC PLATFORM VERSIONS ONLY.
**INTERNET CONNECTION AND EA ACCOUNT REQUIRED TO PLAY. MUST BE 13+ TO CREATE AN ACCOUNT.
***QUALIFICATION FOR THE EA SPORTS FIFA ULTIMATE TEAM CHAMPIONSHIP SERIES AND FIFA INTERACTIVE WORLD CUP IS ONLY AVAILABLE TO ELIGIBLE PLAYERS ON XBOX ONE AND PLAYSTATION 4. NO OTHER PLATFORMS AND CONSOLES ARE SUPPORTED FOR QUALIFICATION
****RESIDENCE IN ELIGIBLE COUNTRIES REQUIRED. FINAL TERMS AND STRUCTURE SUBJECT TO CHANGE.
EA SPORTS™ is one of the leading sports entertainment brands in the world, with top-selling videogame franchises, award-winning interactive technology, fan programs and cross-platform digital experiences. EA SPORTS creates connected experiences that ignite the emotion of sports through videogames, including Madden NFL football, EA SPORTS™ FIFA, NHL® hockey, NBA LIVE basketball, Rory McIlroy PGA TOUR® golf, and EA SPORTS UFC®.

Why are foreign governments apparently after my details?