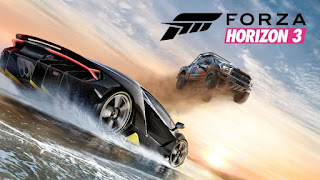 Great
news for racing game fanatics – Xbox is giving you an exclusive hands-on opportunity to
race in the highly-anticipated Forza
Horizon 3 this weekend, ahead
of its official launch on Tuesday, 27 September!
Fans and gamers can head down to Games Hub at Harvey
Norman Millennia Walk Flagship Superstore on Saturday, 24 September and Sunday, 25 September to try out the yet-to-be-launched
game, take part in the Forzathon and win attractive prizes.
GET SET TO RACE IN THE HIGHLY-ANTICIPATED FORZA
HORIZON 3
As the newest entry to the best-selling racing
franchise, Forza Horizon 3 is the largest, most diverse, and fun
racing world ever built, set against the beautiful backdrop of Australia. Fans
and gamers can race and explore the vast Australian landscape with friends in
over 350 of the world’s greatest cars, including the all-new
Lamborghini Centenario, which is making its digital debut in the Forza
franchise.
Additionally, fans and gamers will be able to take
charge of the Horizon Festival, and have the power to modify race events, hire
and fire friends, and customize everything from the driver’s character, to new
body kits and even the sound of the car horn.
Forza Horizon 3 will launch on 27 September on Xbox One
and Windows 10, and is now available for pre-order at your favourite video game
retailers on the Xbox Store.
EXPERIENCE IT FIRST AT GAMES HUB AT HARVEY NORMAN
MILLENNIA WALK FLAGSHIP SUPERSTORE THIS WEEKEND
Come on down to Harvey Norman Millennia Walk Flagship
Superstore this weekend to race on the yet-to-be-launched Forza Horizon 3! Fans and
gamers who participate in the Forzathon can also stand to win a wide array of
attractive prizes including digital copies of Forza
Horizon 3, the Forza
Horizon 3Lamborghini Centenario model car, limited edition Xbox Wireless
Controllers, Xbox premiums and more!
Here are the details:
·        Date:    24 – 25
September 2016
·        Time:    2 – 6pm
·        Venue:
Harvey Norman Millennia Walk, L1
PRE-ORDER BONUS AT GAMES HUB AT HARVEY
NORMAN MILLENIA WALK FLAGSHIP SUPERSTORE ON 24 & 25 SEPTEMBER
Fans and gamers who pre-order Forza Horizon 3 game for Xbox One at Harvey Norman
this weekend will receive a bonus Forza
Horizon 3 Lamborghini
Centenario model car.
Forza Horizon 3 retails at S$69.90 for the Standard Edition and S$124.50 for the Ultimate Edition.