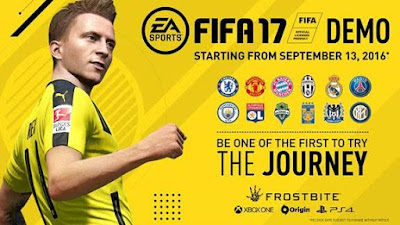 SINGAPORE – SEPTEMBER 14,
2016 – Today EA SPORTS™ Vancouver launched the FIFA
17 demo on Xbox One,
PlayStation 4, PC, Xbox 360, and PlayStation 3 – available to download here. This year’s demo on Xbox One, PlayStation 4, PC* not only
showcases twelve of the world’s best teams including Manchester United, Bayern
Munich, Real Madrid C.F., but marks an opportunity for fans to get their first
opportunity to experience The
Journey*, the new, cinematic,
story-driven mode.
For the first time ever in the FIFA franchise, fans will have a chance
to live their story on and off the pitch as Alex Hunter, a rising star in the
Premier League in The Journey. Players will have the opportunity to play a
select experience as a member of Manchester United, one of the world’s top
clubs.
See an all-new trailer for the Journey: here.
See a behind-the-scenes look at the making of
The Journey: here.
Fans looking for an opportunity to hit the
pitch with some of their favorite squads can jump into a Kick-Off match with
Manchester United, Manchester City, Chelsea FC, Real Madrid C.F., Juventus,
Inter, Paris Saint-Germain, Olympique Lyonnais, Seattle Sounders, FC Bayern
Munchen, Club Tigres UNAL, or Gamba Osaka. Players can also choose from
world-class stadiums including CenturyLink Field, Stamford Bridge and newly
added J1 League ground, Suita City Football Stadium. When matches are loading,
fans can check out some new skill games to hone their abilities before diving
into the action.
Demo players will
experience transformative gameplay features like Set Piece Rewrite, Physical
Play Overhaul, and New Attacking Techniques giving them more control so they
can own every moment on the pitch. Fans can learn more aboutnew features of FIFA
17 by
visiting FIFA 17’s website, and becoming an EA SPORTS FIFA Insider (https://www.easports.com/fifa/newsletter).
Fans can also join the EA SPORTS FIFA communityhttp://www.facebook.com/eagames and follow us on Twitter
@easportsfifa.
For FIFA
17 assets visit info.ea.com.
Fans who pre-order FIFA 17 Super Deluxe Edition can get up to 40 FIFA Ultimate Team Jumbo Premium Gold Packs, Team of the
Week loan players, and other FUT content. Click here to read about all our available pre-order offers.
EA
Access** members
on Xbox One and Origin
Access** members on PC can try FIFA 17 before it’s released with a Play
First Trial starting September
22. EA Access members receive a 10 percent discount when they
purchase a digital version of the game on Xbox Live, and Origin Access members
get a 10 percent discount when they purchase the game through Origin.
FIFA 17 is developed by EA Vancouver and EA
Romania and will be available in Asia on September 27 on Origin™
for PC, Xbox
One, PlayStation®4, Xbox 360® and PlayStation®3.
*FROSTBITE GAME ENGINE TECHNOLOGY, AND THE JOURNEY, ARE
AVAILABLE ON XBOX ONE, PLAYSTATION 4 AND PC PLATFORM VERSIONS ONLY.
**CONDITIONS, LIMITATIONS AND EXCLUSIONS APPLY. SEE EA.COM/EAACCESS/TERMS ANDHTTP://WWW.ORIGIN.COM/STORE/ORIGIN-ACCESS FOR
DETAILS.
Join the EA SPORTS FIFA community at Facebook and
on Instagram. Follow us on Twitter @easportsfifa and use the hashtag #FIFA17. The game is
rated E for Everyone by the ESRB.
EA SPORTS™ is one of the leading sports
entertainment brands in the world, with top-selling videogame franchises,
award-winning interactive technology, fan programs and cross-platform digital
experiences. EA SPORTS creates connected experiences that ignite the emotion of
sports through videogames, including Madden
NFL football, EA SPORTS™ FIFA, NHL® hockey, NBA LIVE basketball, Rory McIlroy PGA TOUR® golf, and EA
SPORTS UFC®.