Today, we will be taking an in-depth look at the ASUS ROG Strix Wireless Gaming Headset. We will be delving specifically into the Physical Design, Sound Performance as well as some other details of the headset. 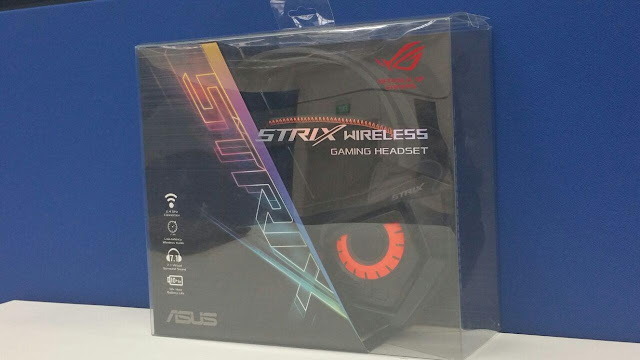 The package comes with: 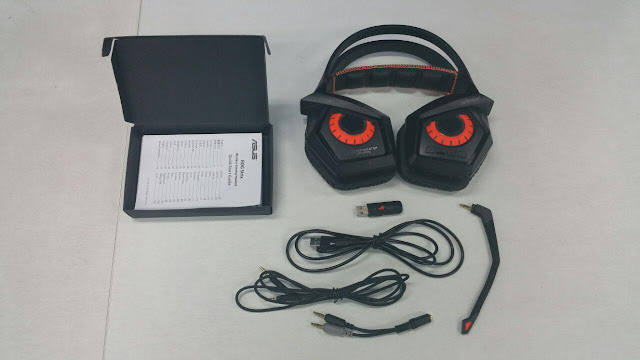 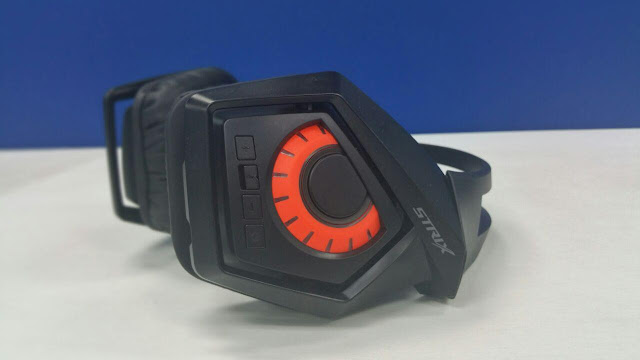 The shell of the headset is made from a plastic-like material with a black matte finish. It is topped with a dash of orange on the “eyes” at the sides and the overhead band. This makes the headset not only look cool and slick, but also vibrant and dynamic. The ROG Strix design team takes pride in the “owl” like design that is featured on all Strix headsets.

Despite being designed and manufactured in a plastic-like material, the entire structure of the headset appears to be sturdy. The flexible nature of this special material allows the headset to be very durable and well made. For example, when slight pressure is applied to the headset, no audible squeaks created by friction between parts were heard. This attribute is also retained even when folding the ear cups on the headset. This flexible material also allows a comfortable fit onto the user’s head, without it being too tight. 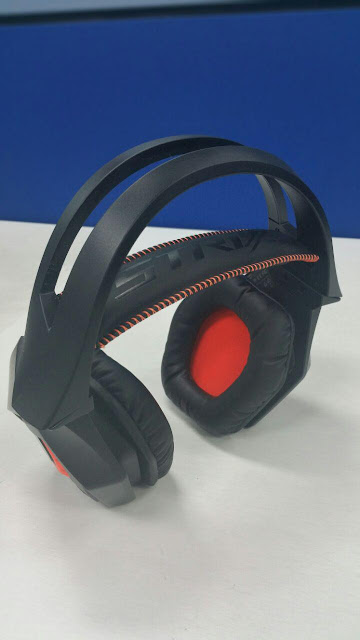 The Strix Wireless Gaming Headset sets itself apart from the other conventional headsets by sporting a stretchable overhead band as opposed to the usual sliders that are used for a fitting. Adjustments on the Strix headset is achieved by simply slotting the overhead band onto your head. By pushing against the head, the band will allow the whole headset to adapt to the user’s head size and shape, resulting in an hassle-free fit adjustment. The overhead band also does not cause any discomfort since it adjusts the headset to perfect-fit, resting firmly on your head, rather than causing a loose fit on other headsets that binds head up like a noose. 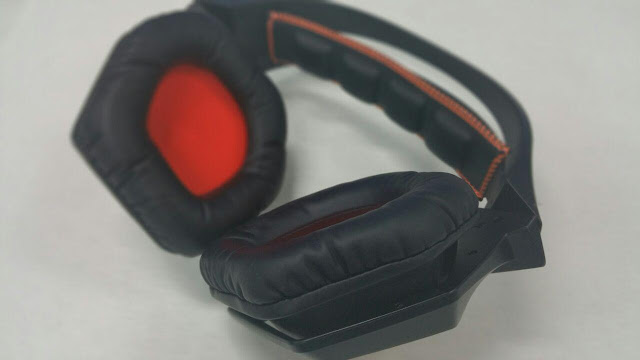 The Strix Wireless Gaming Headset is equipped with two big ear-covers that is made with a soft foam. Due to its larger than usual design, these ear-covers are able to envelop the entire ear, providing noise cancellation and comfort to the listener. Of course, this comes at an expense of a large footprint for a wireless and portable headset. 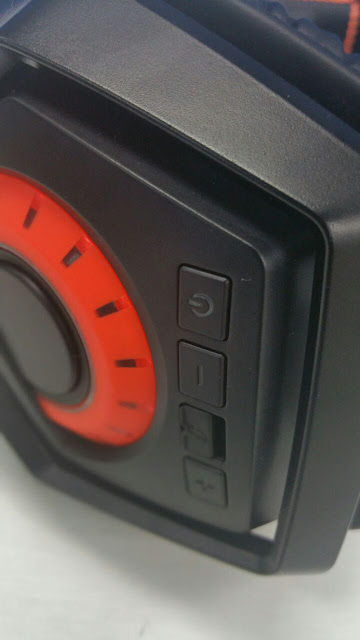 There are 4 control keys on the left side of the headset which allows users to easily change the settings of volume, power as well as the microphone(mute or on). It feels natural to reach out to the buttons on the headset with the left hand as they are placed within a comfortable reach. However, it may take some time before remembering the placement of individual buttons as it is difficult to feel into the etches of the buttons.

Designed for Portablilty, but still Bulky

The headset comes with foldable cups and a detachable microphone for easier storage. Despite its ability to transform into a more compact headset for storage, it does not hide away the fact that the entire main body remains to be rather large and bulky. 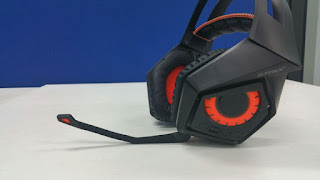 The physical design of the headset is solid and is designed to last. Moreover, its unique overhead band creates a hassle-free experience for the adjustment of the headset for a good fit on the head, without neglecting comfort. Of course, the unique design on the headset must be one of the main selling points of this product. However, it fails to deliver its value in portability, as we found the headset to still be considerably bulky.

The headset features 7.1 virtual surround sound capabilities with the help of ASUS Sonic Studio. This is a software suite which is included with the purchase of the headset. Gamers can enjoy a more immersive experience whilst gaming, enabling them to be more aware in their gaming environment and giving them an edge against the opponent. 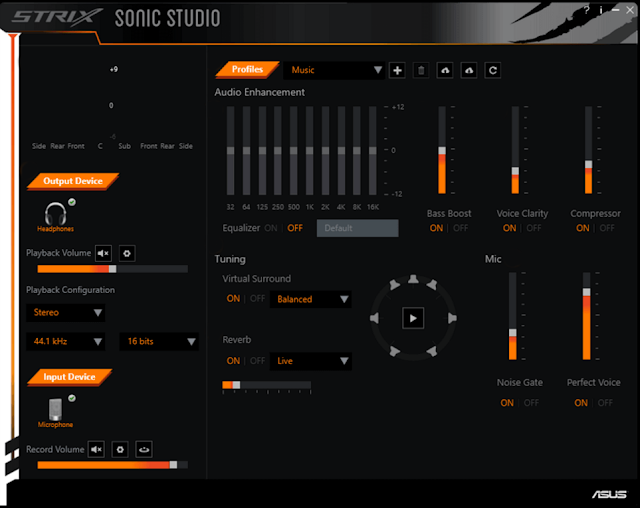 The ASUS Sonic Studio also allow its users to have full control of their audio experience. Sonic Studio is also packed with other features such as an audio equalizer and bass boost. Understanding that audio quality is a matter of personal preference, Sonic Studio enables full personalization of audio profiles for different users and different scenarios, resulting in the best possible audio experience for its users.The average joe can also enjoy the benefits of the Sonic Studio software, even though it may seem intimidating with all advanced features that are available. ASUS has provided default options and profiles to choose from, and users can simply edit their preferences from there to get started.

But only for PC

Sadly, as the feature-rich software is only available on the Windows platform, users having MacOS X, Android, or iOS may not get to realise the headset’s full features and benefits. The wireless headset has to pair with a USB dongle which then establishes the connection to the PC. Then, users can utilize the hardware and software combination goodness that is made for the headset.Even though the headset works with all the other devices on the other platforms via a standard 3.5mm audio connections, the audio output from these platform may not be as complete as those which is connected to the PC.

In general, as the Strix Wireless Gaming Headset is made specifically for gaming, it is made with a audio profile more towards games. This means that bass effects are tuned to simulate gunshot sounds instead of usual drums. Such differences can be heard distinctly if you are someone who is used to listening to more songs with high clarity, rather than a more “immersive” style of environment simulation.
Nonetheless, the Strix Wireless Gaming Headset still sounded average for standard songs. It was lacking in the highs, but was able to produce taut and well defined lows. We found the mid range tones to be a bit muffled, lacking of clarity. Of course, we are testing the headphones without any tuning from the Sonic Stage software. There was a great difference after customization of the audio profile from the software.
We truly felt the usefulness of such a gaming headset in games, especially in FPS games. With the Strix headset and the software functions, the surround simulation actually allowed us to know where the enemy was coming from. With such a technology, we were able to pinpoint and determine with accuracy the target of advancements, giving us an added edge in our game.Sadly, the Sonic Stage software will only be available when the headphones are connected wirelessly. Users will be not be able to use the advanced audio profile software if a standard 3.5mm cable was used for the connection instead. 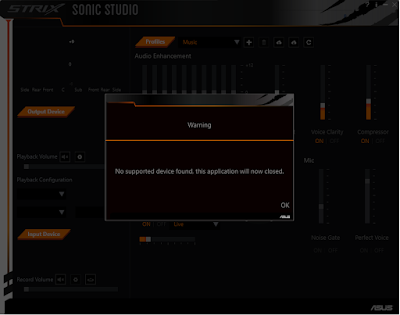 Using other methods aside from the USB dongle to connect to the PC will not detect the headset as a Strix Wireless Headset. This restricts some of the capabilities it has like the Control Keys and the ASUS Sonic Studio.

We would have much preferred a wireless headset to conform to a more general and widely accepted wireless technology. As the ROG Strix Wireless Gaming Headset connects to the PC wirelessly via a dongle, side effects such as incompatibility to other systems due to the lack of drivers are due to arise. While the headset is branded to be compatible with mobile devices, the connection can only be done via a 3.5mm cable. This could be deemed as somehow misleading, as users would have expected a full wireless experience from the headset.

In conclusion, the ASUS ROG Strix Wireless Gaming Headset cater to a spectrum of users with its array of features, capabilities and detachable add-ons/components. Sadly, it falls a bit short of meeting everyone’s needs. Understanding gamers are the target audience of this product, the Strix Wireless Gaming Headset could still be a hit for PC gamers, especially for those who wants a full wireless experience. However, if audio quality is the thing that you are looking for, there are likely better alternatives in the market. 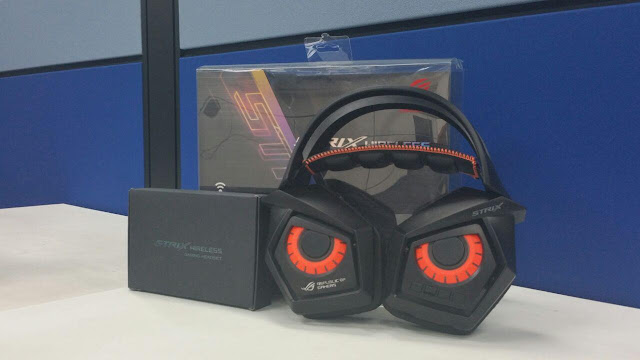