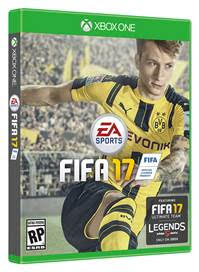 Singapore – July 22, 2016 – Today, Electronic Arts Inc. (NASDAQ:
EA) announced that fans chose Marco Reus of Borussia
Dortmundto be the global cover athlete of EA SPORTS™ FIFA 17.
Over the past two weeks, fans have voted on the official FIFA Cover
Vote Website for their
favorite player among four FIFA 17 ambassadors, James
Rodriguez of Real Madrid C.F., Anthony Martial of Manchester United, Eden
Hazard of Chelsea FC, or Marco Reus of Borussia Dortmund. Fans cast over 3.1
million votes, with Reus emerging as the victor.
Reus is a highly-decorated striker, and is
widely regarded as one of the most dangerous attackers in Europe. Reus was
named Footballer of the Year in Germany in 2012, and has 29 appearances with
the German National Team.
“It is incredible to see how fans get behind
their favorite player – Marco plays for a great club, is really fun to watch,
and he is very popular in FIFA Ultimate Team, so it makes a lot of sense that
the fans picked him,” said Nick Channon, Senior Producer for EA SPORTS FIFA.
“Reus joins an elite group of international football superstars who have
appeared on the cover of FIFA over the years.”
“I’m honored to join a very distinguished
group of footballers to appear on the cover of FIFA,” said Reus.
“Most of all I am humbled that the fans have chosen me, and I will strive to
make them proud with my performance on the pitch.”
All four players featured in this year’s cover
vote are global ambassadors for FIFA
17 and influenced key gameplay features to bring innovation
to the way players think and move, physically interact with opponents, take set
pieces, and use new techniques in attack.
With innovative
gameplay features that let fans own every moment on the pitch, FIFA 17 brings
an overhaul to Physical Play, a Set Piece Rewrite, New Attacking Techniques,
and a brand new Active Intelligence System. Fans can learn more about new features to FIFA 17 by visiting FIFA
17’s website, and by becoming an EA SPORTS FIFA Insider (http://easports.com/fifa). Fans can also join the EA
SPORTS FIFA community http://www.facebook.com/easportsfifa and
follow us on Twitter @easportsfifa and, Instagram.
EA SPORTS FIFA 17 is developed by EA Vancouver and EA
Bucharest, and will be available in North America on September 27 and
worldwide on September 29 on Origin™ for PC, Xbox
One, PlayStation®4, Xbox 360® and PlayStation®3. The game is not yet
rated.
Fans who pre-order FIFA 17 Super
Deluxe Edition can get up to 40 FIFA Ultimate Team™ Jumbo Premium Gold
Packs, Team of the Week loan players, and other FUT content. Click here to
read about all our available pre-order offers. EA Access* members
on Xbox One andOrigin Access* members on PC can play the game early
with Play First Trials. Stay tuned for more information on access timing and
availability.
FIFA 17 is powered by Frostbite™**. One of the
industry’s leading game engines, Frostbite delivers authentic, true-to-life
action, takes players to new football worlds, and introduces fans to characters
full of depth and emotion.
*CONDITIONS, LIMITATIONS AND EXCLUSIONS APPLY.
SEE EA.COM/EAACCESS/TERMS AND http://www.origin.com/store/origin-access FOR
DETAILS.
**Frostbite game engine technology is
available on Xbox One, PlayStation 4 and PC platform versions only.
Join the EA SPORTS FIFA community
at Facebook and on Instagram. Follow us on Twitter @easportsfifa and
use the hashtag #FIFA17.
EA SPORTS™ is one of the leading sports
entertainment brands in the world, with top-selling videogame franchises,
award-winning interactive technology, fan programs and cross-platform digital
experiences. EA SPORTS creates connected experiences that ignite the emotion of
sports through videogames, including Madden NFL football, EA
SPORTS™ FIFA, NHL® hockey, NBA
LIVE basketball, Rory McIlroy PGA TOUR® golf,
and EA SPORTS UFC®.
For the LATEST tech
updates,
FOLLOW us on our Twitter
LIKE us on our FaceBook
SUBSCRIBE to us on our YouTube
Channel!