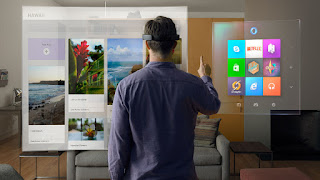 TAIPEI, 1 June 2016 — Wednesday at Computex 2016, Microsoft Corp. invited its Windows 10 hardware partners to create virtual reality (VR) devices, augmented reality devices and everything in between with Windows Holographic, the platform that powers Microsoft HoloLens. In opening up Windows Holographic to partners, Microsoft shared its vision for mixed reality — a world where devices interact with each other to change the way people work, communicate, learn and play.
“With Windows 10, we’ve been on an incredible journey with our partners, and today we usher in the next frontier of computing — mixed reality,” said Terry Myerson, executive vice president, Windows and Devices.
Windows: The only holographic platform
With over 80 million virtual reality devices expected on the market, per year, by 2020, the business opportunity for virtual reality is vast. Yet, today’s devices are built with related but differing technologies — ranging from virtual to augmented reality. These devices and experiences do not work together today, because of different user interfaces, interaction models, input methods, peripherals and applications. Most virtual reality experiences can’t mix real people, objects and environments into the virtual world, making creation and collaboration difficult.
Windows Holographic unites these worlds and enables innovation across a range of devices. Windows Holographic offers a holographic shell and user interface, perception APIs, and Xbox Live services, enabling a familiar experience across apps and content. All Universal Windows apps can run on the Windows Holographic platform. Today there are nearly a thousand Universal Windows Apps that run on Windows Holographic.
In a mixed reality world, devices can offer experiences that extend beyond the virtual world. Imagine wearing a VR device and seeing your physical hands as you manipulate an object, working on the scanned 3-D image of a real object, or bringing a real-life holographic representation of another person into your virtual world so you can collaborate. In this world, devices can spatially map your environment wherever you are; manipulating digital content is as easy and natural as it is in the real world. Interested partners can learn more athttp://www.winhec.com.
In addition to opening up Windows Holographic to its partner ecosystem for the future, Microsoft is working with Intel Corporation, AMD Inc., Qualcomm Inc., HTC Corp., Acer Inc., ASUS, Dell Inc., Falcon Northwest, HP, Lenovo Group Ltd., MSI and many others to build a hardware ecosystem supporting great virtual reality experiences on Windows 10.
Celebrating new Windows 10 devices
Nick Parker, corporate vice president, OEM division, highlighted how Microsoft works hand-in-hand with PC makers, celebrating innovation in hardware from PCs to gaming to Internet of Things and beyond.
The latest on Microsoft’s involvement at Computex 2016 — including new Windows 10 devices from Acer, ASUS, Dell, HP and MSI — can be found at the Windows blog.