WhatsApp video call functionalities has been in development for about 6 months. Last December, there was a leaked image showing the basic interface for WhatsApp’s video call feature on iOS, but since then, there were no news about the new features.
Last weekend, many beta users of Android WhatsApp 2.16.80 realised that there was a Video Call functionality within the application. Usually, users can call directly with the press of the phone button. However, in this particular WhatsApp version, users get to choose between the choice of making Video calls or Audio calls. This shows us that the launch of the new feature is imminent. However, at this stage, the selection of the video call button simply does not work.
Some websites reported that a group of users were able to initiate the video calls. However, at this point of time, there are no concrete evidence to show that video call is already working on WhatsApp. In the updated version, WhatsApp has already removed the functionality.
WhatsApp could be using the same strategy for the roll out of their video call feature. Last year, to introduce the new audio call feature, WhatsApp started to test their new app only with a selected few testers. As there are a billion of users using WhatsApp, the company can only stagger the roll out of the feature, so as to ensure that their hardware can handle all the load.
WhatsApp users who are eager to try out the new video call feature can only wait for the official roll-out of the application via the respective application stores. 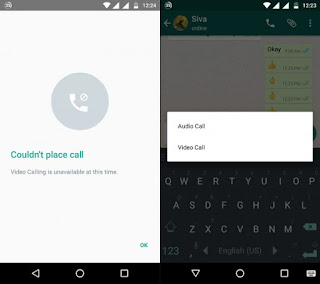 Power Your Passion and #MakeItYours with Cooler Master