Detection of the Locky Ransomware with Hillstone iNGFW

Home » Detection of the Locky Ransomware with Hillstone iNGFW

Detection of the Locky Ransomware with Hillstone iNGFW
Hillstone Networks Intelligent Next Generation Firewall provide an effective way to detect Locky ransomware which has been quickly spreading worldwide
Hillstone Networks iNGFW has effectively detected the Locky ransomware and its variants, ensuring businesses do not fall victim to Locky’s malicious intent.
The Characteristics of Locky Ransomware
Locky is a ransomware that is usually contained within a Microsoft Word document sent by email as an attachment – often as an invoice – to large numbers of recipients using a massive spam campaign. Since its first appearance, Locky has spread rapidly and infected thousands of computers hourly, according to research.
Once the attachment is opened, the ransomware is installed and enabled on the victim’s computer. It tries to download Portable Executable (PE) files from a remote control server and executes it from there. It then encrypts every file in the local drive, as well as the network, using RSA-2048 and AES-1024 algorithms.
It subsequently displays messages on the victim’s machine and tells the victim to visit an attacker’s website for further instructions and ransom payment in order to decrypt the previously encrypted files. The ransom demand varies and can be paid using bitcoin.
Detecting Locky Ransomware with Hillstone iNGFW
The detection and protection mechanisms on Hillstone Networks iNGFW include the following: 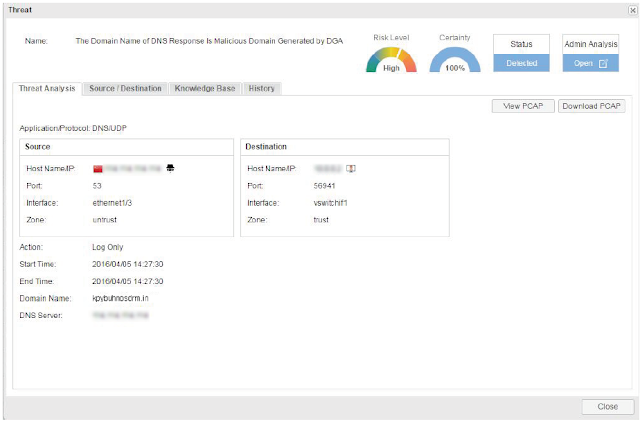 For detailed information, read the “Detection of the Locky Ransomware” blog post or download a complimentary copy at http://www.hillstonenet.com/register.