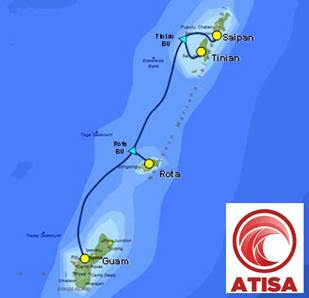 ATISA submarine cable system map
Saipan, Commonwealth of Northern Mariana Islands – March 10, 2016 – DOCOMO PACIFIC Inc., a wholly-owned subsidiary of NTT DOCOMO, Inc., and NEC Corporation (NEC; TSE: 6701) today announced the signing of a contract to build ATISA, an optical submarine cable system that will connect Guam with the Commonwealth of Northern Mariana Islands.
ATISA, a state-of-the-art six fiber pair optical fiber submarine cable system measuring approximately 280 kilometers in length, will connect the islands of Guam, Saipan, Rota and Tinian. Following the anticipated completion in early-2017, ATISA is expected to enhance connectivity among the four islands.
Mr. Jonathan Kriegel, President and CEO of DOCOMO PACIFC, added by saying “Today marks the beginning of a new era in communications connectivity between Guam and the CNMI. Project ATISA was born out of the collective desire of elected leaders, business owners, and most especially, our customers to bring transformative change to our islands’ infrastructure.”
“We are very pleased to have the opportunity to take part in the deployment of ATISA. Once completed, ATISA will have a significant and measurable impact on the ways the Northern Mariana Islands and Guam interact and communicate with the rest of the world. For over 35 years, NEC has supplied submarine cable systems, and today, we are proud of adding ATISA to our long list of contributions to the region,” said Mr. Naoki Yoshida, General Manager, Submarine Network Division, NEC Corporation.

RAZER TO SHOWCASE ULTIMATE ULTRABOOK AT IT SHOW 2016