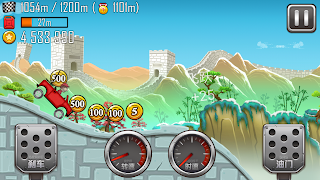 A year ago in February Fingersoft launched a new version of its hit game, Hill Climb Racing – Chinese Adventure tailored for the Chinese market in co-operation with Finnish-Chinese publisher MyGamez. Last week, the world’s largest mobile operator, China Mobile awarded it for being the most innovative mobile game in 2015.

The prize is not the first major award for Fingersoft in China. The original Hill Climb Racing was chosen for the Best Game in 2014 by UCWeb application store whereas China Mobile awarded it as the best game in the sports category.

“The Chinese market has traditionally been very difficult to reach for ‘westerners’. However, with the local knowledge of MyGamez, we got our foot in the door at the world’s fastest growing markets. Now a significant part of our revenues comes from China”, Jarkko Paalanen, Business development director of Fingersoft says.

The award-winning game is a China-targeted edition of the hugely popular Hill Climb Racing. In addition to a new look, more appealing to the Chinese audience, the racing takes place in famous Chinese landscapes, such as the Great Wall of China, Shanghai city and the Yellow Mountains.

“Good gameplay is universal, but when the players understand the language and the game context is familiar enough, the game becomes a lot more accessible. By understanding the audience, we have achieved to attract also those players who are not enthusiastic about the western context”, says MyGamez CEO Mikael Leinonen.

The two versions of the game have been downloaded in China for more than 54 million times in 2015 alone.

Hill Climb Racing, initially launched in 2012 has been an incredible success story. All versions of the game have been downloaded more than 400 million times worldwide and counting, making Hill Climb Racing probably the most popular car game ever. Even at this very moment it still is in top 10 game downloads in more than 20 countries around the world.

The secret of lasting success has been the continuous updating of the game with free new content. Current version of Hill Climb Racing has much more to offer in gameplay and content than the originally released version.