PlayStation®4 Software DRAGON QUEST HEROES™: The World Tree’s Woe and the Blight Below™ (EN Ver.) confirmed for release on 13 October 2015

PlayStation®4 Software DRAGON QUEST HEROES™: The World Tree’s Woe and the Blight Below™ (EN Ver.) confirmed for release on 13 October 2015
Pre-order bonus: SteelBook® with original design “DRAGON QUEST Case Made of Metal Slime” as a gift! Other Initial limited premium available as well!

Singapore, 29th September, 2015 – Sony Computer Entertainment Hong Kong Limited (SCEH) Singapore Branch announced that the English version of the first ARPG for the DRAGON QUEST® series “DRAGON QUEST HEROES™: The World Tree’s Woe and the Blight Below™” will be released on PlayStation®4 on 13 October 2015 at the price of SGD69.90.
This title is the first genuine Action RPG of the series developed by ω-Force of KOEI TECMO GAMES CO., LTD. which is well known for its “Warriors” franchise such as“Dynasty Warriors”, under the advisory of the licensee of “DRAGON QUEST” series, SQUARE ENIX CO., LTD. Players will be able to experience intense battles with vastmonster armies in the world of DRAGON QUEST!
The following contents which were originally released as the post launch DLC for the Japanese version will be included in the game for free.
【1st download content】The Fugitive Felons and the Colissea Cup
【2nd download content】The Burgled Book and the Master of Monsterkind
【3rd download content】The Strongest Sword and the Dark Dream Demon
【4th download content】Beryl’s Big Day and the Brobdingnagian Beast
【5th download content】Maya’s World Tour and the King of Corruption
There will be many extra bonuses as a celebration of the release, so make sure you don’t miss this great opportunity!
■ Pre-order Bonus: “DRAGON QUEST Case Made of Metal Slime”
Pre-orders start from 28 September 2015 (Monday) to 11 October 2015 (Sunday) at PlayStation® Authorised Dealers and Sony Stores. Customers who pre-order for the package version of “DRAGON QUEST HEROES: The World Tree’s Woe and the Blight Below” can receive a limited “DRAGON QUEST Case Made of Metal Slime” while stocks last. 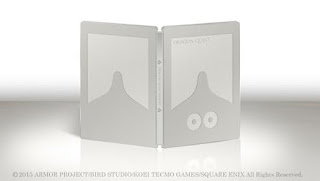 The “PlayStation®4 DRAGON QUEST Metal Slime Edition” released on December 11, 2014 was a very well appreciated product with the concept that “it is carefully created by a blacksmith master, using metal fragments forged when defeating the Metal Slime.” Upon the Asian version release, “the blacksmith master has created a special case similarly to keep the great adventures of the heroes”, which is the “DRAGON QUEST Case Made of Metal Slime”.
■ Disc Initial Shipment Bonus & Download Early Purchase Bonus: “DRAGON QUEST III Hero Costume” & “Slime’s Weapon Set”
The DLC bundle pack which includes 10 types of character weapons and costumes listed below will be available as the initial shipment premium for the disc version and as the early purchase bonus for the download version of the “DRAGON QUEST HEROES: The World Tree’s Woe and the Blight Below” (English version).
・DRAGON QUEST III Hero Costume (For Main Characters)
・Slime Sword (For Main Characters and Terry)
・Squishing Rod  (For Doric)
・Goomerang (For Isla)
・Gooey Gloves  (For Alena)
・Gungenir  (For Kiryl)
・Goopid’s Bow  (For Bianca)
・Slime-On-A-Stick  (For Nera)
・Goolden Axe (For Yangus)
・Splat o’ Nine Tails  (For Jessica)
・Gooreat Sword  (For Psaro)
■ PS Plus Bonus: “Fandangoos”
Customers who purchased the download version of “DRAGON QUEST HEROES: The World Tree’s Woe and the Blight Below” (English version) and joined PS Plus membership will have a limited bonus DLC “Fandangoos” (for Maya) that can be used in the game.
【Product Information】