“HALO 5: GUARDIANS” LAUNCHES INTO SPACE AS PART OF WORLDWIDE FAN CELEBRATIONS
Fans in Asia will also be able to join those from around the world to celebrate the launch of Halo 5: Guardians via an exclusive six-hour live “Halo 5: Live” broadcast
Greater Asia, October 26, 2015 – To commemorate the global launch of Halo 5: Guardians, Xbox’s biggest exclusive title and one of the most anticipated games of 2015, Microsoft sent the gamertag of Asia’s most dedicated Halo player “Sandwhichy” into space, as part of a series of launch activities engaging Halo fans from around the world. 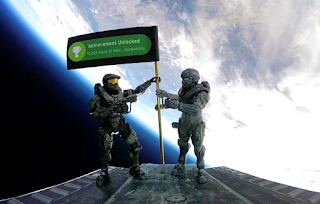 The gamertag of Asia’s most dedicated Halo player, “Sandwhichy”, who clocked more than 10,000 hours in the Halo franchise, was sent to space with his gaming achievements displayed on a flag held by the Master Chef and Spartan Locke
Sandwhichy, a super Halo gamer in Japan who has clocked more than 10,000 hours in the Halo franchise, saw his gaming achievements displayed on a flag held by the Master Chief and Spartan Locke on their mission to the edge UNSC Infinity Replica of space and back. The full video can be viewed here.
“I am absolutely thrilled about this opportunity. I have played the Halo franchise for more than a decade and never thought that I would see my gamertag in space. It literally feels like I’m at the top of the world, a once-in-lifetime experience that I would never forget,” said Sandwhichy.
Fans are also invited to be part of this epic mission by voting for the coveted in-game items that will join Sandwhichy, the Master Chief and Spartan Locke on their journey to Earth’s outer limits. The three most-voted for items from the list of seven below will join Sandwhichy, the Master Chief and Spartan Locke on board for the blast off to space:
·       UNSC Pelican Replica
·       Cortana Mega Bloks Figure
·       M6 Pistol Replica
·       Banshee Strike Mega Bloks Vehicle
·       Limited Edition Halo 5: Guardians Controller
·       #Huntthetruth Tweet Book
In addition, the Xbox team at Microsoft has teamed up with YouTube for an exclusive six-hour live broadcast “Halo 5: Live” that will connect millions of Halo fans worldwide and allow viewers to watch, comment and virtually participate in multiple launch celebrations held in key international locations including Australia, Hong Kong, Japan, New Zealand, Taiwan, UK and the US.
“Halo 5: Live” will kick off at 6 am (SGT, HKT) on October 27 and culminate at midnight when “Halo 5: Guardians” goes on sale in North America. The broadcast will feature exclusive gameplay reveals, celebrity appearances, live interviews with the 343 Industries development team, special documentaries and much more.
A one-of-a-kind Master Chief helmet will also be up for auction for fans who want to own the unique memorabilia. Designed by both Taiwanese cosplayer Hsu Chia-Hao (alias Braid Clarke) and Australian designer Jenny Manik Mercian – who has collaborated with labels such as Victoria’s Secret and had her works worn by celebrities such as Beyoncé and Gisele Bündchen. The helmet is adorned with 25,000 Swarovski crystals and weighs about 5kg. All auction proceeds will go to non-profit organization, Make-A-Wish Foundation. The full video of the making of the helmet can be view here. 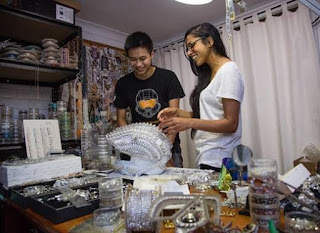 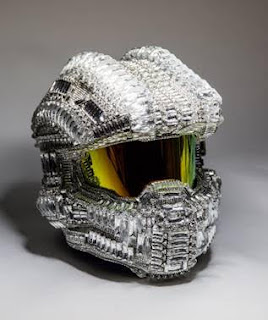 “We know our fans across all of Asia are getting ready to play Halo 5: Guardians and we are doing some very special things to celebrate the Halo Nation across Asia. From Space to a Swarovski-crusted Crystal helmet to an action-packed six-hour live broadcast – the launch of Halo 5: Guardians is shaping up to be our most epic video game launch in Asia,” said Rennie Addabbo, General Manager of Xbox for Microsoft Greater Asia.