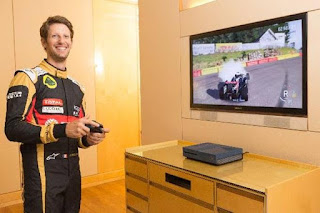 Lotus F1 Team Driver Romain Grosjean gunning for his best race time in Xbox’s exclusive “Forza Motorsport 6”
Greater Asia, SINGAPORE – 18 September 2015 – To celebrate the launch of “Forza Motorsport 6”, an Xbox One exclusive title, Xbox is inviting all fans to beat the race timings set by Lotus F1 Team Driver Romain Grosjean and Head of Xbox Phil Spencer for a chance to win ultimate bragging rights in “Forza Motorsport 6”.
Called the “Forza Motorsport 6 #TimetoShine Challenge”, participating fans will need to better the race times set by Romain Grosjean (1 minute 52.703 seconds) and Phil Spencer (2 minute 00.343 seconds), using the 2015 Lotus F1 Team’s E23 Hybrid on the Circuit de Spa-Francorchamps track in Belgium, for ultimate bragging rights against the two “Forza Motorsport 6” racers. Fans will need to set their time using the “Time to Shine Challenge” Rivals mode event in “Forza Motorsport 6”, which can be found in the Community Monthly channel of Rivals mode in the game. Fans who succeed in beating these times should post a screenshot of their race timings with the hashtag #TimetoShine, on their social media pages, in order to be recognized.
“With the launch of “Forza Motorsport 6” worldwide, we invite all racing fans to experience the game and the Lotus F1 Team’s E23 Hybrid with a little friendly competition. Both Romain and I have set our best lap racing times and we want fans to try and beat us for the ultimate bragging rights in a game that will certainly be the center of many epic virtual racing moments in the months to come,” said Phil Spencer, Head of Xbox. “I would also like to take this opportunity to wish Romain the best of luck in the Singapore F1 race on 20th September as he represents Xbox on the track,” he added.
“I am extremely excited about the launch of “Forza Motorsport 6” in Asia. I’ve had the opportunity to race the E23 Hybrid in the game, and the entire racing experience is absolutely amazing. The visual detail within the car is immaculate, the graphics absolutely breathtaking and the sound is incredible – it almost feels like I’m racing the actual car itself! I’m particularly impressed by the night racing and wet weather modes as they provide an added dimension to the virtual racing experience. I hope fans will put in their best efforts in this challenge, and look forward to seeing them beat the timings set by Phil and I.” said Romain Grosjean, Lotus F1 Team Driver.
Xbox Partners Lotus F1 Team for Special Appearance at the 2015 Formula 1 Singapore Airlines Singapore Grand Prix 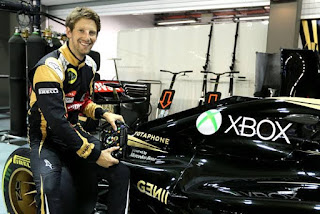 Lotus F1 Team Driver Romain Grosjean with his Xbox-branded E23 Hybrid
This weekend, Xbox and Lotus F1 Team will be bringing to life the “Forza Motorsport 6” racing experience at the 2015 Formula 1 Singapore Airlines Singapore Grand Prix, where Romain Grosjean and Pastor Maldonado will be decked out in Xbox-branded racing suits for the Singapore Grand Prix weekend. In addition, the Xbox brand will also be making a special appearance on the E23 Hybrid cars of both drivers, as they compete against the field for maximum points at the chequered flag.
Racing Forward with “Forza Motorsport 6”
Powered by the cutting-edge ForzaTech™ engine, players can collect and race over 460 ForzaVista™ cars, including the 2015 Lotus F1 Team’s E23 Hybrid that packs a powerful Mercedes Benz Power Unit alongside design and aerodynamic improvements for a superior racing experience, and race these cars in 26 world-famous locales, including Daytona, Le Mans and Circuit de Spa-Francorchamps among others.
Taking virtual racing to the next level, players will also be able to experience the danger and intensity of night racing, from the thrill of racing under the stadium lights at Yas Marina to the utter blackness of Le Mans back stretch. Furthermore, new wet-weather racing elements complete with detailed 3D puddles provide that additional boost for the most complete and realistic Forza experience ever.