Starting July, public can sail for free in 18m-tall sailboats used by world’s top sailors; experience is first of its kind in Asia

SINGAPORE, 25 May 2015 – In 2013, after DBS Bank announced its intent to commit SGD 10 million over three years to enliven Marina Bay, the bank proceeded to introduce a slew of activities to attract people from all walks of life to the bay. With the burgeoning success of these community initiatives and in response to public demand, DBS will now commit a further SGD 12 million over the next three years to ignite even more possibilities at the bay.With community programmes such as DBS Movies by the Bay, the DBS Marina Bay Sailing Programme and POSB PAssion Run for Kids, DBS’ initiatives have since attracted more than 60,000 people to the bay. Marina Bay today has been transformed into a bustling and vibrant hub of activity, host to marquee events such as the annual DBS Marina Regatta and the upcoming 28th SEA Games.Said Karen Ngui, Managing Director and Head of Group Strategic Marketing and Communications at DBS Bank, “Many of us do not realise that the Marina Bay area and where DBS’ headquarters is located today is on land that simply used to be open sea. Marina Bay is an amazing metaphor for how Singapore has transformed within one generation. It represents the Singapore spirit – what we have achieved and what we can achieve together in the future.”“When we made our commitment to enlivening the Bay in 2013, we set out to bring community programmes to the public that would encourage them to see and experience all the Bay has to offer. It’s been an exciting and invigorating three years, and with our increased SGD 12 million commitment for the next three years, we look forward to sparking more joyful experiences.”DBS Marina Bay Sailing Programme expanded to feature first-of-its-kind sailboats in Asia 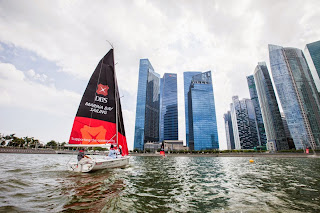 Launched in 2013, the DBS Marina Bay Sailing Programme offered the public the rare opportunity of sailing in the waters of the Marina Reservoir and enjoying its scenery from a different perspective. More than 7,500 people have enjoyed complimentary trips on the eight DBS sailboats around the Marina Bay. Despite DBS increasing the frequency of the highly-popular initiative from an initial monthly affair to a fortnightly one, sailing slots continued to be snapped up within minutes of being released. The DBS sailboats swiftly became a common and iconic sight at the Bay.As part of the bank’s commitment to providing the public with new and singular experiences at the Bay, DBS will be expanding its fleet of sailboats to include six Swedish Match 40 sailboats – the region’s first. Imported from Europe, and built for elite racing and training, this is the first time such boats are being brought to the region. This means that members of the public will soon be able to sail in the same boats used by the world’s top sailors in competitions such as the prestigious America’s Cup – which is widely considered to be the Formula One of sailing. This one-of-its-kind experience will be available from early July 2015, with each boat able to take 12 people. 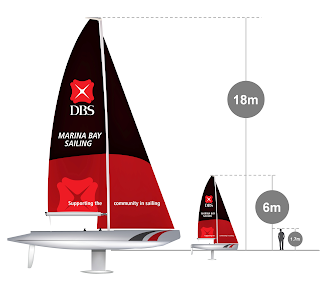 With the combined fleet of 14 sail boats, in all, close to 20,000 people will be able to sail in the Bay each year. Said Karen Ngui, “These sailboats reach an impressive height of 18 metres, or five stories. With the enhanced programme, Singaporeans will be able to take the wheel and steer these vessels through the heart of the Marina Bay for the first time – all for free. It’s an exclusive and unique experience that we want to make available to anyone and everyone. ”Other initiatives that will continue include the DBS Marina Regatta, DBS Movies by the Bay and POSB PAssion Run for Kids, and the bank may also introduce other new experiences. The bank’s sustained effort towards bringing unique and innovative initiatives to the bay is all the more meaningful as the nation looks to the future.DBS Marina Regatta – Igniting possibilities by the Bay
First launched in 2012, Singapore’s biggest watersports festival brought international dragon boat competitions back to Singapore after a 12-year hiatus and has become a marquee regional festival for top dragon boat teams in the region. This year, the DBS Marina Regatta 2015 is set to be the biggest ever and will be held over three explosive weekends. Close to 2,500 paddlers will compete in the regatta and over 20,000 people are expected to attend this year. Held in conjunction with the 28th SEA Games, the SEA Games traditional boat (dragon boat) and sailing races will also be taking place at the Bay. From 30th May to 15th June, the public can expect several one-of-a-kind experiences at the regatta, which will create a vibrant backdrop for the SEA Games.DBS Movies by the Bay 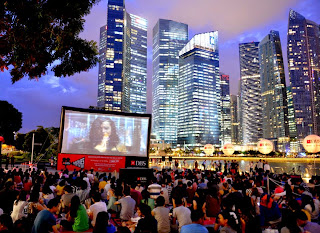 Held once a month since October 2013, the event is a showcase of blockbuster movies under the stars. The public vote for their favourite movies via www.dbsmoviesbythebay.com and the event sees some 1,000 attendees a month on average. The audience have enjoyed watching Academy Award-winning shows such as Avatar, Gravity, The Life of Pi; action-packed movies such as Mission Impossible, Transformers, and romantic comedies such as Stupid, Crazy, Love, and Love, Actually.POSB PAssion Run for Kids 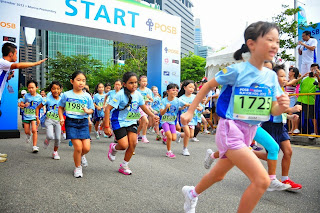 The largest charity family run in Singapore, POSB PAssion Run for Kids started in 2009, and was held at the Marina Bay from 2012 onwards. The run attracts some 10,000 participants annually. More than SGD 3.7 million has been raised for POSB PAssion Kids Fund and the fund has benefitted more than 115,000 children.