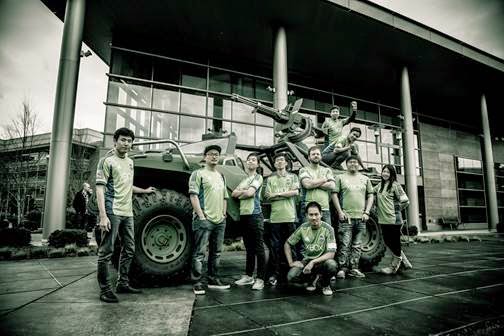 XBOX ONE HIGH FLYERS WELCOMES BACK FANS FROM THE TRIP OF A LIFETIME
Singapore, 2 April 2015 – The Xbox One High Flyers programme concluded with the five grand prize winners returning from the trip of a lifetime across three continents. The ten-day tour was the culmination of a seven-week competition in five countries across Asia-Pacific*.
Over ten days between 30 January and 8 February 2015, the five grand prize winners of the Xbox One High Flyers competition and their friends caught Katy Perry LIVE at one of the world’s most-watched annual sporting event, the Super Bowl XLIX, and soaked in the atmosphere of the illustrious and fiercely-contested Merseyside Derby between soccer heavyweights Liverpool and Everton.
They also had exclusive behind the scenes access at several major game development studios, including 343 Industries, Capcom Game Studio Vancouver, EA SPORTS in Vancouver, Insomniac Games, Playground Games and Ubisoft Singapore. At the studios, the winners and their friends got the rare opportunity to record and lend their voices to characters from the Assassin’s Creed series; had a taste of how motion capture is done for popular titles in the EA SPORTS stable; test-drive the cars featured from Forza Horizon 2 and were part of a select few to ever ride in the Warthog from Halo with none other than the Master Chief himself!
“Catching the Super Bowl was really awesome,” said Nguyen Quy Hy. “We are grateful for Xbox’s efforts in making this trip a truly once in a lifetime experience.”
Click to watch a video of the High Flyers tour: http://www.xbox.com/en-SG/highflyers/
The High Flyers programme is about rewarding fans for their unwavering loyalty to the Xbox platform and underlines Microsoft’s commitment to its fans.
“We are extremely grateful to our legion of loyal Xbox fans for their support. We are proud to offer them an amazing games line-up, the Xbox Live gaming community, and continual innovation that fans have come to enjoy,” said Hanson Yap, marketing manager of Xbox at Microsoft Singapore.
It’s shaping up to be the biggest year in gaming ever at Microsoft. The 2015 line-up includes a number of exclusives like “Halo 5: Guardians,” “Forza Motorsport 6,” “ScreamRide,” “Ori and the Blind Forest” and “Rise of the Tomb Raider” as well as blockbuster third-party titles like ”Mortal Kombat X,” “Evolve,” “Final Fantasy Type-0,” “The Witcher 3: Wild Hunt,” “Batman Arkham Knight,” “Battlefield Hardline” and many, many more surprises.
Microsoft is excited to deliver exceptional value and choice for all our fans in 2015, and continues to ensure that it’s more fun on Xbox One.
*Participating countries for the Xbox One High Flyers competition: South Korea, Singapore, Taiwan, Hong Kong, and New Zealand