Drone startup Garuda Robotics gets US$10,000 as the winner of Startup Arena Jakarta 2013 - The Tech Revolutionist

Drone startup Garuda Robotics gets US$10,000 as the winner of Startup Arena Jakarta 2013

Home » Drone startup Garuda Robotics gets US$10,000 as the winner of Startup Arena Jakarta 2013 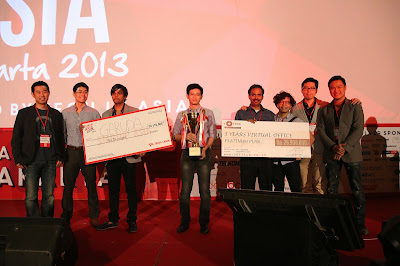 Garuda is a drone-as-a-service company that has created a full-stack solution for government bodies and big businesses. In second place in the Startup Arena competition is Bio3D, a Singapore-based startup that creates a 3D printer that prints cells, bio-materials, and plastic. The second runner-up is SmartBike, a Vietnam-based startup selling a device that prevents bike theft.
Tech in Asia’s fourth international Startup Arena competition was part of the two-day Startup Asia Jakarta 2013 conference, where nine startups competed in front of over 1,000 attendees and an expert panel of four judges who are influencers in the startup scene. The judges at the Startup Arena competition are: Nobutake Suzuki (venture capitalist and partner of Global Brain), Saemin Ahn (managing partner of Rakuten Ventures), Khailee Ng (venture partner of 500 Startups), and Jimmy Rim (founder and CEO of K Cube Ventures). The eight contenders in the competition were handpicked from more than 200 applications submitted prior to the event to pitch and challenge in front of top investors, industry leaders, and international press over the two-day event.
On the successful closure of its fourth international conference this evening at Plaza Bapindo in Jakarta, Tech in Asia founder Willis Wee noted:

We are thrilled to be able to bring our conference back to Jakarta for the second time, and this is the first time our entire team has come together after our acquisitions earlier this year. This is yet another refreshing experience for us, taking away knowledge from local heroes, leaders, and entrepreneurs from the technology and startup scene. We hope to deliver an even better event the next time we return.

The eight startups chosen to compete at Startup Arena Jakarta 2013 are as follows (in pitching order):
See our full list of Startup Arena Jakarta 2013 finalists here and full coverage of the event here. According to the organizers, the next Startup Asia conference will be held in Singapore next May, with co-founder of 9gag.com Ray Chan and former CEO Fritz Demopoulos confirmed as speakers.
—
About TechInAsia.com
Tech in Asia is an online technology media company based across Asia and the United States. As a crew of journalists and bloggers with a culture and passion for new ways of delivering technology and startup news, they have bonded together under one goal – to share with the world and regional audiences on the latest happenings in Asia’s technology and startup scene.
About Startup Asia Jakarta
Startup Asia is Tech in Asia’s signature two-day conference held bi-annually in both Singapore and Indonesia. It showcases newly launched and product-ready technology startups born in the region, on top of having a huge line-up of industry speakers on stage to speak about technology and startup trends in the region. Startup Asia is in its second year running, and Startup Asia Jakarta 2013 is Tech in Asia’s fourth international conference.
About Startup Arena Jakarta
Startup Arena is part of the two-day Startup Asia conference where startups will take to the stage to compete in front of top investors, industry leaders, and international press.

Review of ASUS VivoMouse - Is it really usable?