It probably would not be the best time to purchase a new MacBook Pro now as they are all based on the current Ivy Bridge architecture. Haswell based processors have already been around the market for a few months now and the new MacBook Pro refresh will run on these processors. This also means more performance and longer battery life for probably a comparable price point. 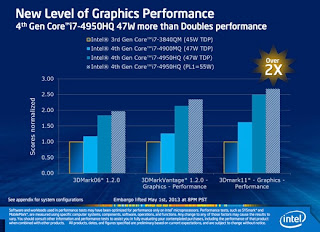 At WWDC held in June, Apple upgraded the processor of the current MacBook Air to the latest Intel Haswell processors. It would not be surprising if the refreshed Apple MacBook Pro will have their processors upgraded in September. This will essentially increase the performance and decrease the power consumption of these new MacBooks. Intel will be releasing their most powerful mobile processor Gt3e Core i7 4950HQ and also other models. It will be using Intel’s own Iris Pro 5200 graphics processing unit which is about 2-2.5 times faster than previous generation’s Core i7-3840QM. The new Iris Pro also reaches performance mark of a A10-6800K GPU unit and is just below that of a GT 750M.

Apple has always urged Intel to work on a faster GPU. We foresee that Apple wants to use their graphics solutions on the MacBook Pro. MacBook Pro will be using Iris Pro 5200’s variant, and may be clocked higher than usual or could be customized according to the requirements of Apple’s specifications.

It is not clear if Apple will upgrade MacBook Pro Retina or non-Retina version to the latest Graphics chip from Intel, but we believed that it should be on the non-Retina version. Apple Retina display runs at a 2560 x 1600 resolution and even though we’ve seen much improvements on Intel’s Graphics solutions, it may not be powerful enough to support such high resolutions especially when using graphics demanding applications. It is more reasonable to use it in a non-Retina display machine.