Apple iPad 5 is said to be redesigned around the look and feel of iPad mini. This speculations seem to be more definitive with the new leaked images.

According to TechKiddy, a suspected iPad 5 engineering prototype’s photo was leaked, showing its back chassis. This iPad’s camera is located at the device’s top left corner. It seems to be longer than a iPad 4 and it looks much like an iPad mini. 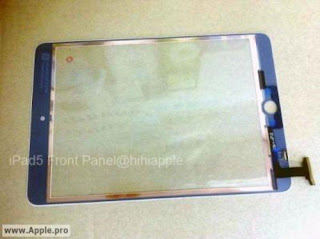 The leaked image also shows that volume buttons found on the side of the new iPad 5 are designed differently as compared to iPad 4. The volume up and down button are now independent, unlike previous generation which comes in a single piece. The whole body is slimmer than iPad 4.

According to Taiwan’s industrial chain sources, Apple’s iPad 5 will be lighter than the previous iPad 4. This is because of the use of smaller batteries. The new generation iPad will be thinner than iPad 4 by 15% . The glass used is said to be reduced in thickness from 0.25mm to 0.2mm. 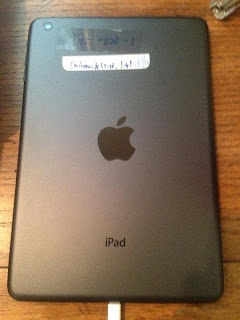 After repeated leaks of the new iPad, we were quite certain that the new iPad 5 will look similar to the ones found in the image above. According to sources from Foxconn’s iPad department, iPad 5’s internal codename is known as sapoxx and that its current external design has been confirmed. It will be using a narrow frame design and the sides will be curved.

Coincidentally, KGI Securities analyst Kuo Ming-Chi had previously disclosed that the next generation iPad will come in a 9.7inch form factor and will borrow the design from the current 7.9inch iPad mini. Its weight will be slightly lighter than previous 3rd and 4th gen iPad and it will also be thinner too. The new iPad will come in the 3rd quarter of 2013.

There have been widespread unofficial news that the new iPad 5 will be launched in around September this year. Taiwan’s supply chain disclosed that mass manufacturing will start in July to August period. They are expected to ship around 5 million iPad 5 in the 3rd quarter period. The same news source also claims that the second generation iPad mini will start manufacturing from September onwards and will be launched in December, just in time for the holiday season.

Apple has seen that iPad mini will be affecting initial iPad 5 sales if they were to be launched together. Therefore, Apple has decided to stagger the launch period of both devices to drive more sales for both devices

If 1kW of power is not enough, try the new EVGA SUPERNOVA 1300 G2 Gold PSU