Gliffy is a web-based diagram editor. It allows the creation and sharing flowcharts, network diagrams, floor plans, user interface designs and other drawings online. Gliffy has made diagramming much simpler with plugins to popular online applications such as Confluence, Google Apps and even Word 2013. It is one of the best online tools out there for both technical and non-technical diagramming. 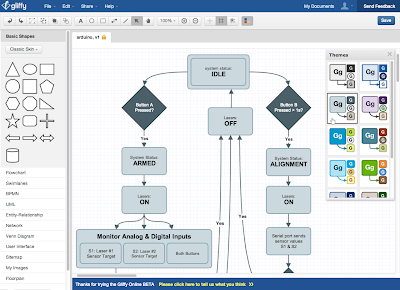 Gliffy is very excited about this major upgrade to Gliffy Online. In order to bring users ultrafast response rates and an impressively improved set of features, they’ve completely rebuilt the application’s editor in HTML5.

Users can start using the supercharged beta version of Gliffy Online right now. Just log in & tick the option box to load the HTML5 version instead of the current Flash-based version.

While this release is currently undergoing beta testing, all of the current saved Gliffy documents should load and save just as before, only faster and with new feature support. Look for new features like keyboard shortcuts, Visio file import, and drag-and-drop image insertion that are available.