Nokia Lumia 920 sold out in 20 minutes in Shanghai

Home » Nokia Lumia 920 sold out in 20 minutes in Shanghai

The second batch of Nokia Lumia 920 has reached Nokia’s flagship store in Shanghai on 29th December 2012. This time, all the units were sold out in 20 minutes, much faster than the first batch’s 2 hours. This is yet more news of the Lumia 920 not being able to meet the demands of its consumers.

Similar to the first batch, the Lumia 920 is limited to China Unicom’s mobile plans. Seemingly, yellow is the favourite colour for the Chinese as the yellow versions are the first to be sold out. The customers snatching for their purchase of the Lumia 920 are those who did not make their Lumia 920 reservations in advance and are trying their luck for the purchase of the device. As seen from the images, the device is really quite popular with the Chinese population. 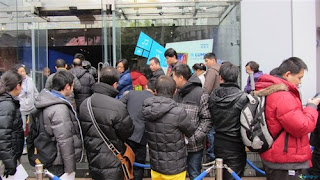 It is not announced of when the next batch of Lumia 920 will be arriving in the store. Customers can only wait for the next announcement and be early at the store to get their hands of the flagship device from Nokia.

At this rate of Chinese adopting the Windows Phone, there could really be a possibility of Windows Phone devices overtaking Apple iPhone’s market share in China.

How Padfone 2 empowers me as a Student