Skate on the Windows Surface Tablet!

Microsoft Windows Surface tablet will be meeting us next week. Before the official launch, President of Windows Division from Microsoft decided to tease us with a new feature of the Windows Surface Tablet : Skateboarding.

Steven Sinofsky twitted 2 new photos some time ago. In them, he was skateboarding at some shopping mall. What was so different, was that the skateboard was essentially the Surface Tablet with 4 wheels attached.

Good thing that he had his helmet on. We wouldn’t him to hit hard on his head if the tablet cracks. However, he proved his point. The Surface Tablet, with Gorilla glass 2 is really durable and can actually withstand his weight. Well, I’m more interested in a new episode of Surface tablet in “Will it blend”.

Anyway, the Surface tablet will launch together with Windows 8 on 26th October, and prices starts at USD499. 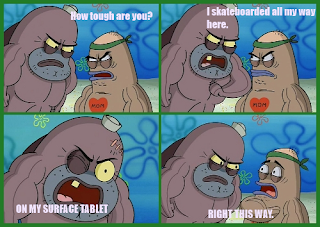 The next rumoured Nexus phone from Google, does it have a place?

iPad Mini to start at 249 euros. Surface no fight?