Powered by the new ultra-efficient NVIDIA Ada Lovelace architecture, the 3rd generation of RTX, GeForce RTX 40 Series GPUs are beyond fast, giving gamers and creators a quantum leap in performance, neural rendering and many more leading platform capabilities. This massive advancement in GPU technology is the gateway to the most immersive gaming experiences, incredible AI features and the fastest content creation workflows. These GPUs push state-of-the-art graphics into the future.

ROG and TUF Gaming graphics cards pair that potent processing power with a stack of innovations to deliver even higher performance, lower temperatures and enhanced reliability for work and play.

Stake a claim with the ROG Strix GeForce RTX 4090 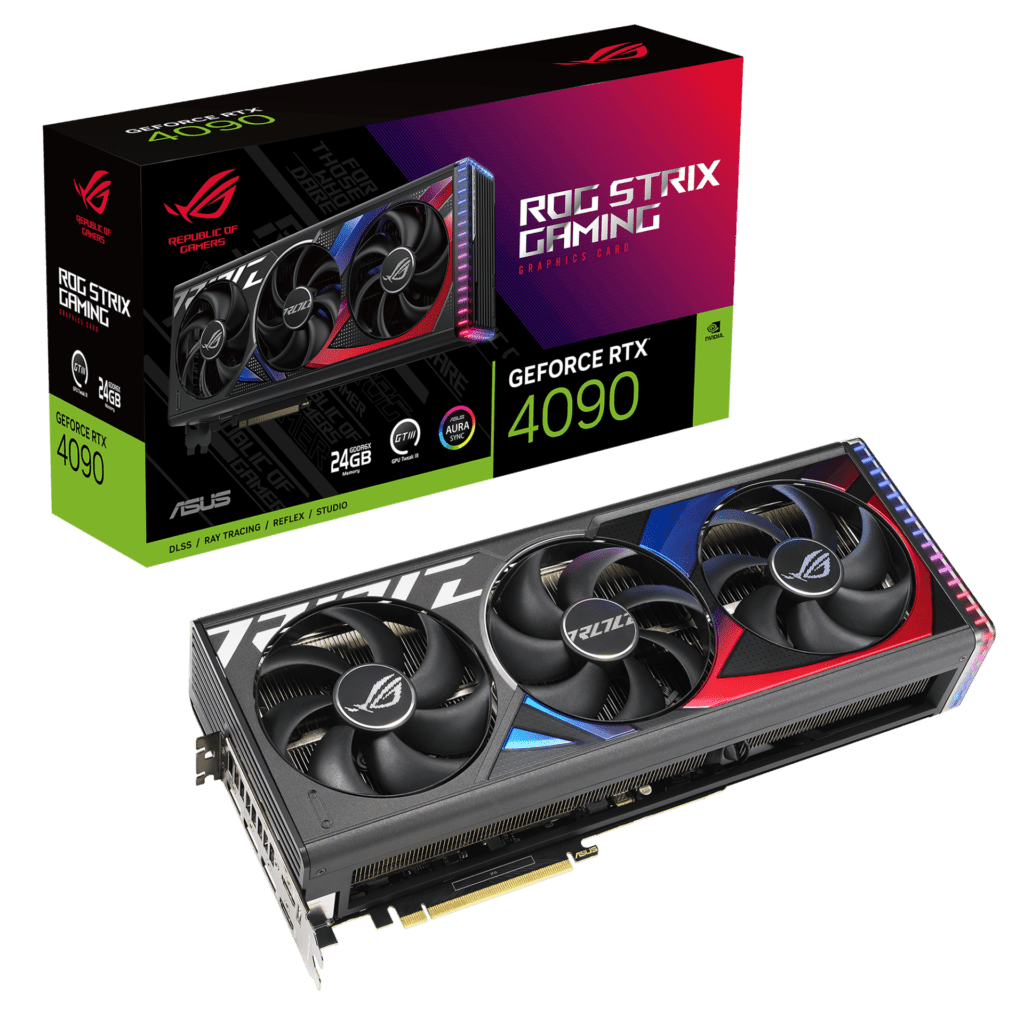 If one wants to make a statement with the best gaming card money can buy, look no further than the new ROG Strix GeForce RTX 4090. With unprecedented power, this card is designed for ultra-high resolutions or super-fast refresh rates that help users reign supreme on the battlefield.

To extract the ultimate performance from the Strix GeForce RTX 4090, ASUS built it with cooling as the top priority. The card’s 3.5-slot design consists of a die-cast metal frame, shroud, and backplate. The ultra-rigid structure uses frames with extremely tight tolerances to prevent the PCB from sagging or warping, while still allowing for unparalleled airflow through an enlarged pass-through vent along the back of the 357 mm long card.

But with an ultra-powerful GPU like the GeForce RTX 4090, ASUS wanted to go further than a large heatsink and vented backplate. So a team of engineers rebuilt the heatsink design from the ground up, with a new vapor chamber and 30% more surface area for heat dissipation than the previous generation ROG Strix GeForce RTX 3090.

This is no ordinary vapor chamber, however. In order to provide better heat transfer, this patented vapor chamber design adds milled channels underneath the heatpipes. Instead of the pipes lying flat against the surface, they sink into the vapor chamber, allowing more heat to efficiently transfer to the four 8 mm and three 6 mm heatpipes and travel to the heatsink fins. When subjected to a 500-watt thermal load, this potent pairing allows for 5 °C cooler temperatures than a conventional vapor chamber design.

ASUS also upgraded the Axial-tech fans, with a thicker design featuring seven blades and full barrier rings that provide 23.8% more airflow and 19.3% more pressure than the previous generation fans used on the ROG Strix GeForce RTX 3090. With these improvements, ASUS was able to keep GPU temperatures and acoustics at similar levels to the previous generation model, despite the extra power.

Speaking of power: This is an absolute monster of a gaming card, so ASUS has included a 12+4 phase system comprised of 70-amp power stages. With two power stages per phase fueling the GPU, that is a total count of 24+4. The digital controller on board offers higher precision when detecting power, as well as better power conversion and balancing for less noise and signal interference. With a quality power supply in place (like our ROG Thor 1200P2), users should have no problem driving this beast of a graphics card, and with native 16-pin PCIe® support, they can do it without any adapters required.

All of this comes with the same high-end features ROG Strix cards are known for. An ARGB tail light works with Aura Sync to offer customized lighting across your build, while two FanConnect II headers allow control of case fans via GPU temperature readings through the new ASUS GPU Tweak III software. For those who do not want to dig in and tweak too much, the Dual BIOS switch allows one to choose between a maximum performance mode and a quieter mode. Though thanks to ASUS 0dB technology, the card will be silent at low loads no matter which mode is chosen.

Finally, like our other ROG cards, the Strix GeForce RTX 4090 was built with the ASUS Auto-Extreme manufacturing process that minimizes human intervention, so users can expect reliable long-term performance right out of the box. 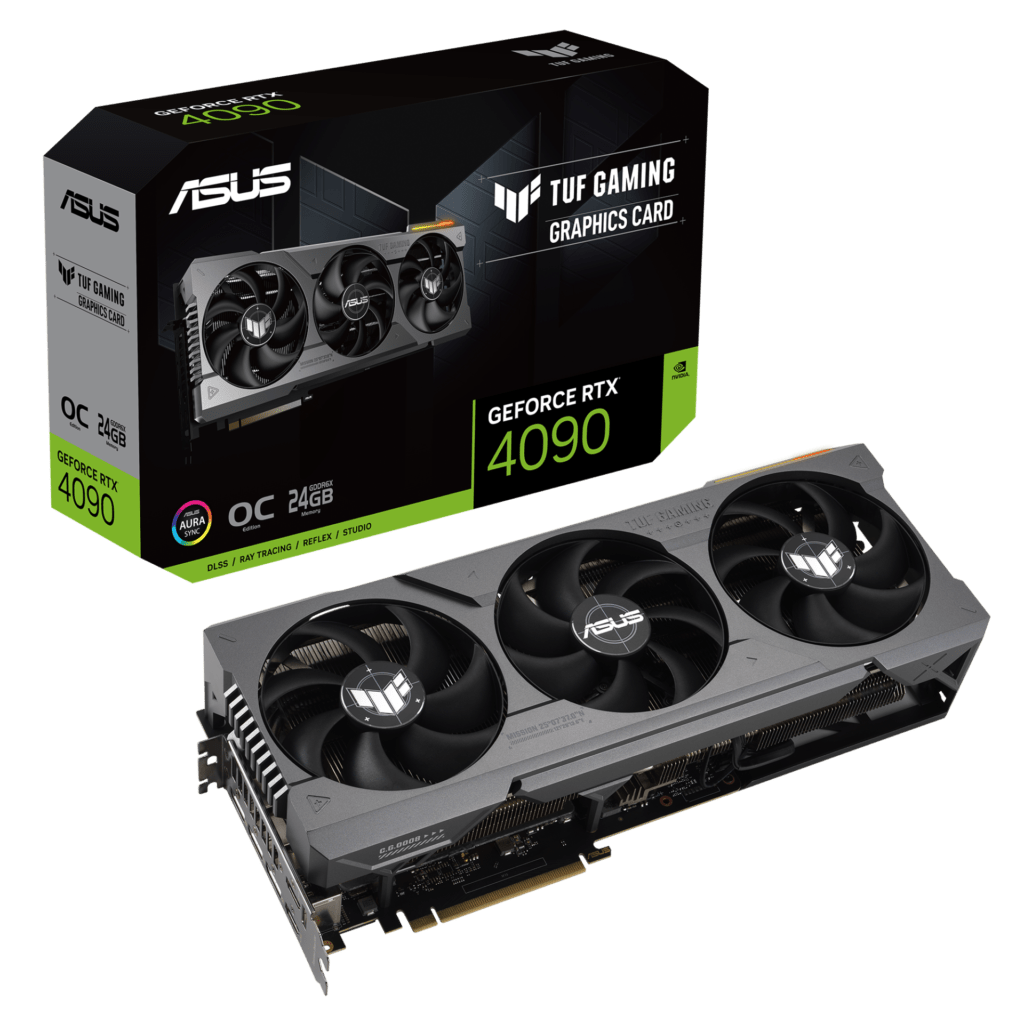 For outstanding performance with a sturdy design, the TUF Gaming GeForce RTX 4090 has users covered. Slightly thicker than its ROG sibling at 3.65 slots, the TUF model measures a bit shorter at 348 mm for wider case compatibility, with excellent performance, cooling and power management.

The TUF Gaming GeForce RTX 4090 uses a die-cast unibody shroud that mates directly to an aluminum backplate to strengthen the overall structure and protect the PCB from sagging, while still offering lots of airflow. An updated 3D acrylic TUF logo along the shroud provides ARGB lighting compatible with Aura Sync, while a detachable velcro loop offers extra cable management options. A massive vent at the edge of the backplate allows even more air to flow through the fins from the larger Axial-tech fans, providing 20% more airflow than last generation’s TUF Gaming GeForce RTX 3090 Ti.

Like the Strix variant, ASUS has also redesigned the TUF Gaming card’s cooling with a new vapor chamber for vastly improved heat transfer. While it does not use the same milled design as its Strix sibling, the eight heatpipes — five 8 mm and three 6 mm — offer a huge leap in cooling potential, with 35% more contact area compared to the TUF Gaming GeForce RTX 3090. Like its Strix brethren, though, one can choose between performance and quiet modes with the onboard Dual BIOS switch or adjust the card’s performance through the new GPU Tweak III software.

To provide the necessary power, the TUF Gaming GeForce RTX 4090 uses the PCIe 5.0 standard’s new 16-pin power connector, which supplies a robust power delivery system, with capacitors rated for 20K and a spread of high-current power stages arranged in a 10+4 configuration. In addition, the Auto-Extreme manufacturing process offers robust longevity that lives up to the TUF name, so you can be confident your top-tier card will power through games for years to come.

Take no prisoners with the ROG Strix GeForce RTX 4080 16GB

For a high-performance card that merges style and substance, the new ROG Strix GeForce RTX 4080 16GB is an excellent choice for a next-gen powerhouse of a PC. Whether one is playing gorgeous games with high-resolution graphics or frantic esports where every single frame is crucial, the overclocked ROG Strix GeForce RTX 4080 16GB pushes this new GPU to the height of its potential.

In order to do that, this 3.5-slot cooler design uses the same die-cast metal frame, shroud, and backplate as the ROG Strix GeForce RTX 4090, providing next-level rigidity for the PCB. At 357 mm long, it offers a massive heatsink for plenty of heat dissipation, as well as a backplate with an enlarged vent for airflow to pass through.

Underneath the heatsink lies the true hero of this performant card, however. Like its higher-powered sibling, ASUS eschewed the traditional heatpipe design and outfitted the ROG Strix GeForce RTX 4080 16GB with a new ASUS-exclusive vapor chamber that uses milled channels to give the heatpipes more contact area. With this more efficient design, ASUS could crank up the power delivery without sacrificing temperatures.

ASUS paired this new heatsink and vapor chamber with the same updated Axial-tech fans, which use a thicker design with seven blades and full barrier rings for more airflow and pressure than previous generation models. This allowed ASUS engineers to further reduce GPU temperatures and fan noise, even with the extra power allotted to the next-gen GPU onboard.

And of course, the ROG Strix GeForce RTX 4080 16GB is loaded with features that make Strix the best of the best. It is equipped with ARGB tail-lights that connect to the rest of one’s rig through Aura Sync, as well as two FanConnect II headers that offer custom control of case fans through the GPU Tweak III software. A Dual BIOS switch offers a choice between maximum performance and quiet acoustics, while 0dB technology ensures both modes will be completely silent at low loads. Combine all that with the Auto-Extreme manufacturing process, and users have a beast of a card that will not let them down. For the best GeForce RTX 4080, ROG Strix has users’ backs in even the toughest firefights.

Built with high performance and long-lasting durability at its core, the TUF Gaming GeForce RTX 4080 16GB brings next-gen performance in a sturdy design. Compared to the TUF Gaming GeForce RTX 3080, this new card boasts a die-cast unibody shroud and aluminum backplate to protect the PCB underneath, with a 3.65-slot thick heatsink for next-level cooling. That is slightly thicker than the Strix variants of this card, but it is also more than 9mm shorter for wider case compatibility.

A trio of ASUS Axial-tech Fans create ample airflow for this powerhouse, with the rightmost fan blowing air through a new vent along the edge of the backplate. Significantly larger than the previous generation, this vent allows for cool operation while sporting a TUF logo that spans both the backplate and the vent frame for a unique look. Underneath, an updated 3D acrylic TUF logo shines on the edge of the shroud with ARGB lighting that can be coordinated with the rest of one’s PC using Aura Sync. A Dual BIOS switch lets one choose between performance and quiet modes, or get to manual tweaking with GPU Tweak III. If one wants a high-performance card that will truly stand the test of time, equip the TUF Gaming GeForce RTX 4080 16 GB and get those boots on the ground.

Alongside the 16 GB variant of this next-gen beast, ASUS is also releasing the ROG Strix GeForce RTX 4080 12GB, offering powerhouse performance in a slightly smaller variant with all the style and substance users have come to expect from ROG Strix. At 3.15 slots thick and 336 mm long, this card provides plenty of surface area on its heatsink for airflow while retaining the new cyberpunk design and ultra-rigid structure of its larger siblings.

All of Strix’s must-have features are all here as well: Choose between performant and quiet modes with a Dual BIOS switch, connect case fans to two FanConnect II headers, and light up a rig with a ring of ARGB tail lights compatible with Aura Sync. Meanwhile, reliable power delivery and time-tested build quality through the Auto-Extreme manufacturing process mean this card is ready to stand with users for years to come. For a more accessible card that still screams Strix, the ROG Strix GeForce RTX 4080 12GB is not to be trifled with.

Prove your mettle with the TUF Gaming GeForce RTX 4080 12GB

Finally, ASUS also offers a TUF Gaming variant of the GeForce RTX 4080 12GB, complete with the same powerful GPU as the Strix version, with a slightly thicker heatsink and shorter card design. At 3.25 slots and featuring long-lasting Axial-Tech fans, users will not be left wanting for cooling potential, while the shorter 305 mm length offers the widest case compatibility of the bunch.

The unibody die-cast shroud shares the same structural strength as its larger brethren, while a wide vent on the backplate improves airflow compared to previous generation models. The 12 GB TUF card also offers the same Dual BIOS switch and redesigned ARGB TUF logo along the shroud for a touch of flair, alongside the military-grade capacitors and Auto-Extreme manufacturing quality all TUF cards are known for. If one wants a durable card that will prove its worth time and time again, the TUF Gaming GeForce RTX 4080 12GB stands firm in its commitment to long-lasting gaming performance.

Go on a power trip

The ROG Strix and TUF Gaming GeForce RTX 4090 and RTX 4080 are some of the most powerful gaming cards we’ve ever offered, providing unparalleled performance for high-end PCs. To make sure you get the absolute most from your next-gen rig, pair your new graphics card with one of our premium power supplies, like the ROG Thor 1000P2, ROG Thor 1200P2 or ROG Loki SFX-L 1000W Platinum for small form factor builds. With their high-quality components, quiet operation, and 10-year warranty, you know your PC is in good hands.