If you are going to build a new Desktop PC, one of the most essential choice to make is the PC Case. A PC case gives the whole desktop build its own character, and also helps you to narrow down the types of components that can be placed within it. While most computer cases today are targeted for gamers, which come in extravagant and over-the-edge designs in order to stand out from the crowd, there is still a demand for more professional, clean and minimal computer cases in the market. This is where the Cooler Master Silencio series stands.

The Cooler Master Silencio product series aims to target those consumers who wants to create the ultimate silent PC from their build. They are specially designed to contain the noise coming from the computer components, such as fans, within the case, so as to give users the noise-free experience while using their desktop PC. However, by ensuring that a computer system remains as quiet as a mouse, most computer cases have to sacrifice cooling performance. 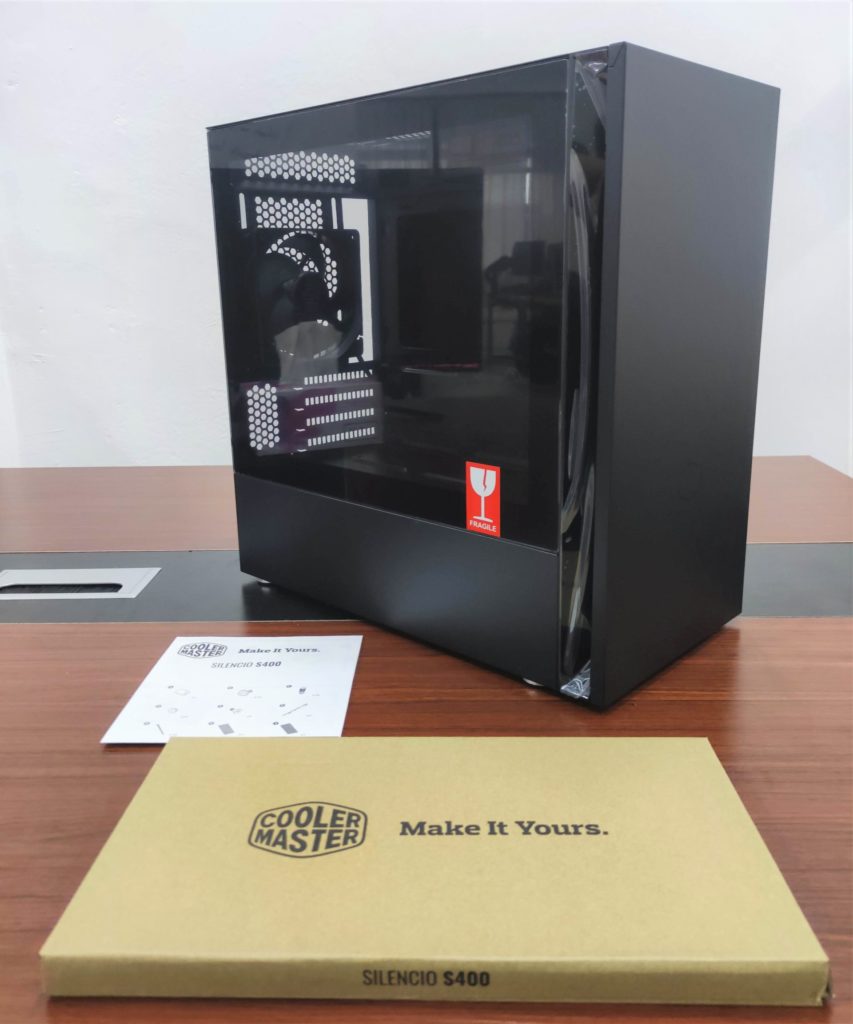 The Cooler Master Silencio S400 has largely retained its minimal design. There aren’t any kinds of fancy RGB LED lighting or features that’s found on the case. Even the Cooler Master logo at the front the case has been toned down, almost camouflaged into the base black colour of the case. The version we have for review today comes with a tempered glass side panel. There is also a sound-dampened steel side panel alternative available as well. 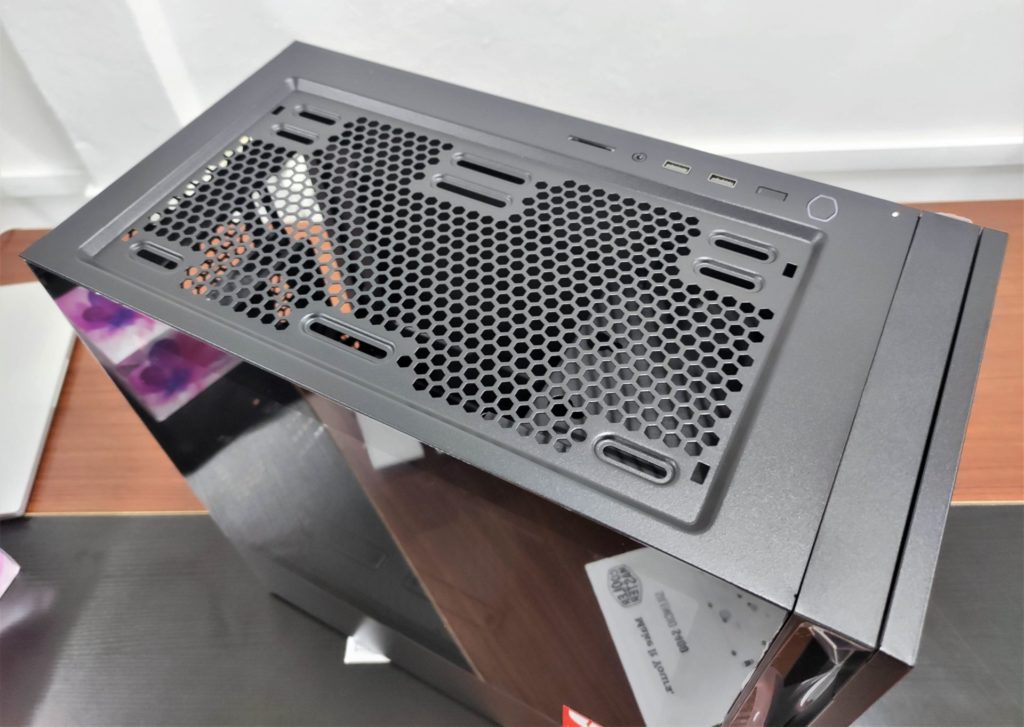 The Sound Dampening cover can be removed for unrestricted ventilation, and be replaced with the dust filter. Both covers are provided within the package.

The simple and minimalist design is seen throughout the whole case. Despite it, the Cooler Master Silencio S400 doesn’t lose out in terms of its features as well. The whole case comes with a tool-less design, which means that you can work with near to zero tools in order to get the whole system built. First off, both the side panels make use of thumb screws. This provides for quick access to the internals of the computer system.

There is ample space within the Cooler Master S400, as well as many cable management features found. For example, there are various holes made specifically just for cable ties and cable routing. The case also has routing holes just at the right place for cables to easily reach the different locations of the motherboard, such as the top-left for the CPU EPS 8-pin, bottom for the front panel buttons, external USB ports and HD Audio, as well as the usual specially grommeted holes on the right side. 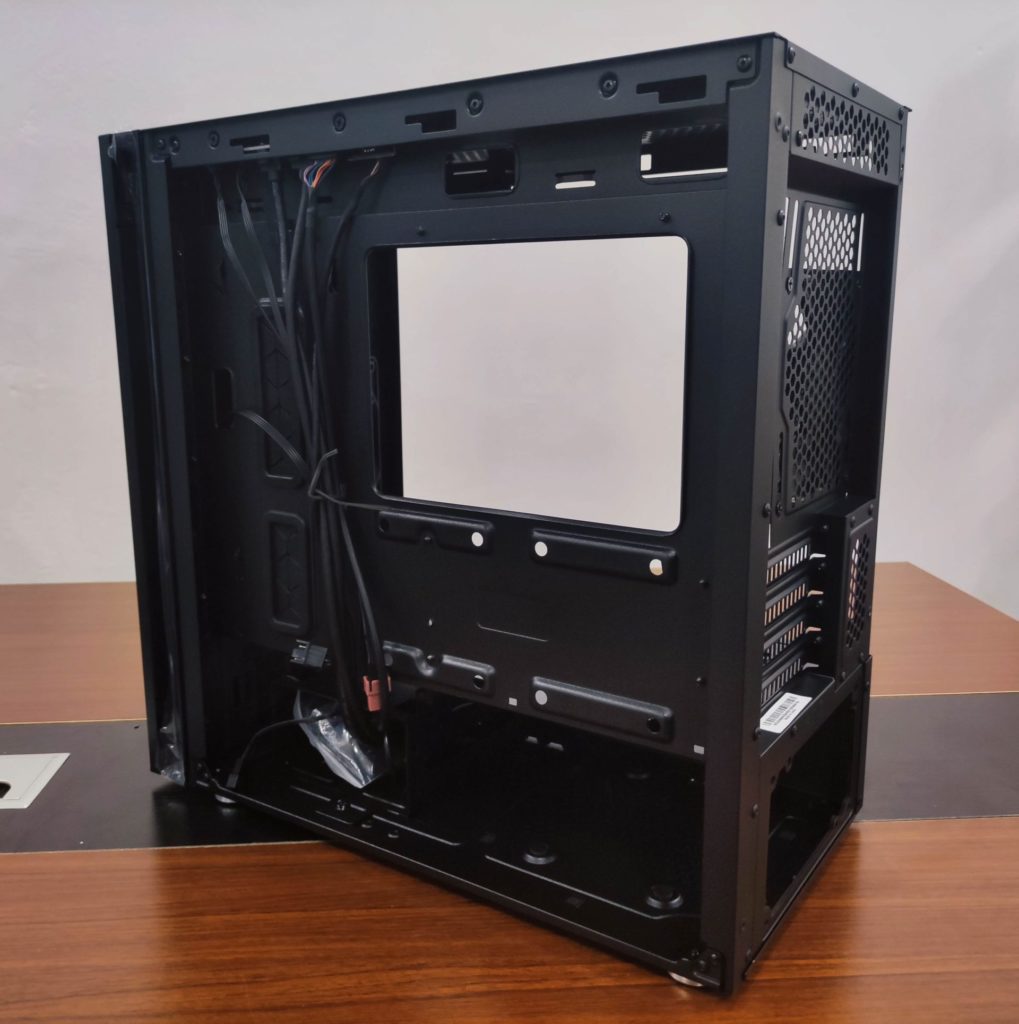 The whole power supply area has been totally separated from the main PC components. This gives the whole system two benefits.

Firstly, the compartmentalization of these two areas also isolates the heat source from one another. This means that the heat coming from the power supply or the main PC components won’t affect each other, and they can both be effectively cooled by their own dedicated cooling features.

Secondly, this design also makes cable management a lot easier. If you are someone who doesn’t want to dwell into too much cable management for your desktop, you can simply chuck all the excess cables into the space at the bottom area, and you still can have a decent looking computer from the front.

Moreover, there is also a large hole right in the middle of the motherboard tray for easy access, installation or replacement of the CPU cooler.

While many of these features were lacking in computer cases of yesteryears, I guess it’s considered a requirement for most contemporary computer cases today. 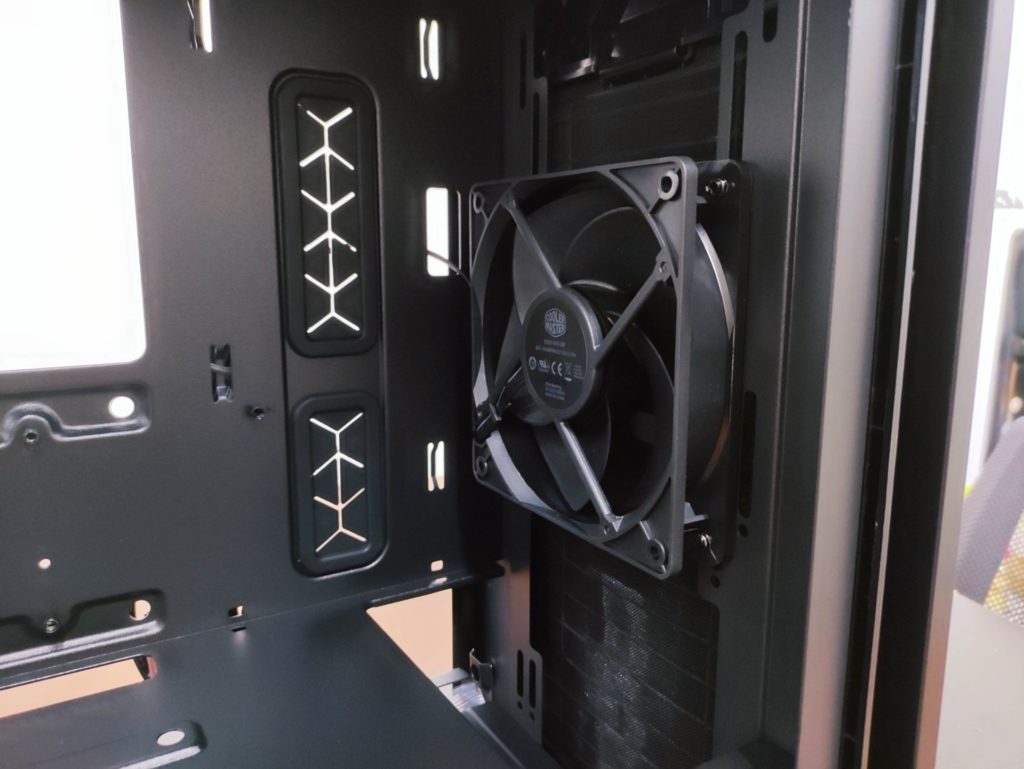 The Cooler Master Silencio S400 also comes with two fans pre-installed in the case, one at the front and one at the back. These are specially designed Silencio fans, which will operate both quietly and still drive high air pressure. These two pre-installed fans also come with rubber padding to further reduce noise.

The front of the case can also fit two 120/140mm fans and also up to a single 280mm radiator. However, with a 280mm radiator, you may need to sacrifice a HDD mounting spot that’s found below the ODD bay.

In case you are wondering if the front panel of the case will block the fan’s airflow, the straightforward answer is no. There is still a considerable amount of space for air to be pulled into the case at the front of the space, and the front panel wouldn’t be an obstruction.

The front panel can easily be removed, as it is hinged to the right side of the case. We can spot the 5.25″ drive bay, as well as the dust filter at the front of the case. The removable dust filter also makes it extremely easy for us to maintain the case, as we can simply wash the dust away from this panel.

Also, if you take a closer look, there are also special noise-reduction material found on the front panel, reducing the noise that’s coming out from the fans at the front of the case as well. 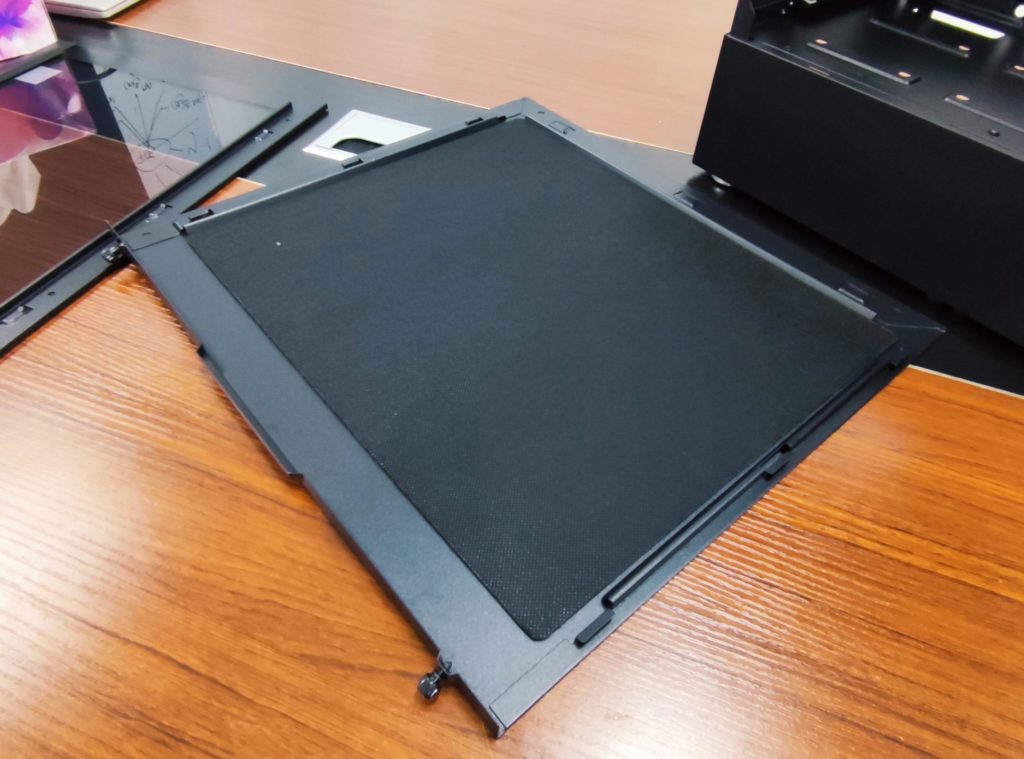 The right side panel of the case is also features this same kind of material.

Now at the rear of the case, we can also see that we can place an addition 120/140mm fan. We also spotted the extra clearance space at the top of the case. This is to ensure compatibility with radiators for water cooling setups.

As for drive expansion, the whole case can fit up to 4 x 3.5inch and 4 x 2.5inch drives. Do also take note that the 3.5inch drives can also be installed without any use of additional tools, as the brackets are also included in the package. We simply had to attach the brackets to the drives and then slide them into the drive bays. It’s super straightforward! 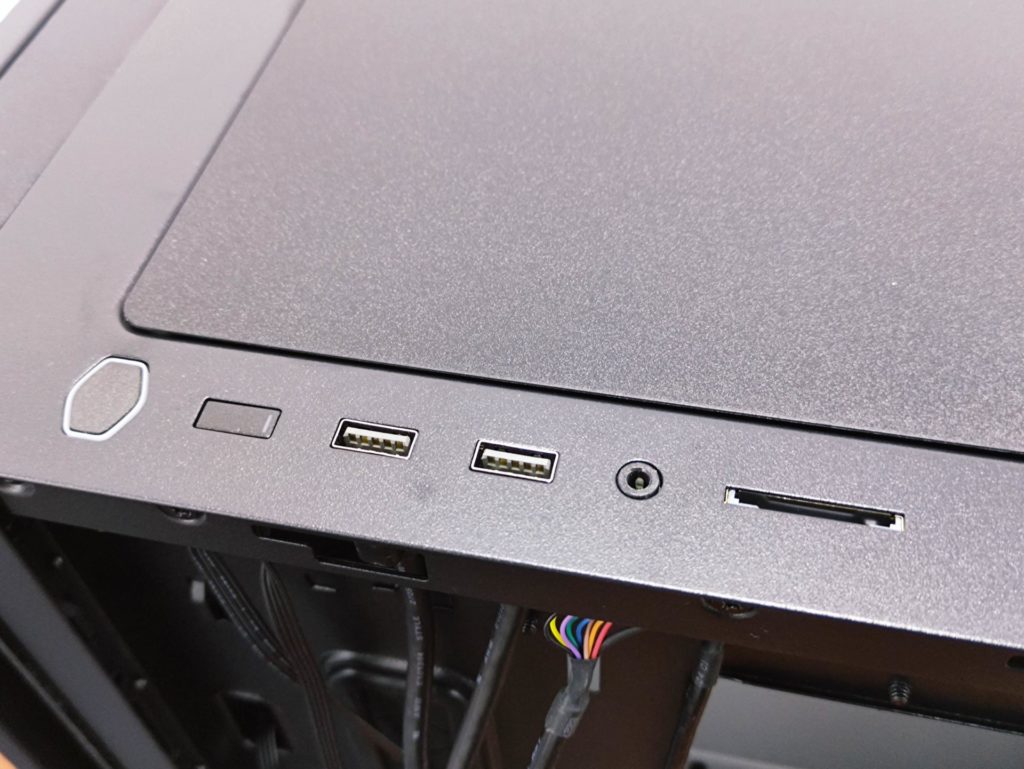 The Cooler Master Silencio S400 also comes with a rather limited external connectivity. It only comes with 2 x USB 3.0 ports and a single audio combo jack. It also comes built-in with a SD Card reader, but it is connected to the PC via USB 2.0. This means that the read/write speed on SD cards will be limited to USB 2.0 speeds of 480Mbps. However, we still can appreciate this feature, as we can’t find it in many cases today.

Other than that, we have the standard power button and reset button as well.

Our Build and Thoughts

The new desktop wanted to build was not any simple computer. In fact, it will be featured with an AMD Ryzen 9 5900X CPU with a AMD Radeon RX 6800XT graphics card. These two components are known to produce quite an amount of heat, and not all cases can handle such kinds of components, especially when it’s in a Micro-ATX form factor. 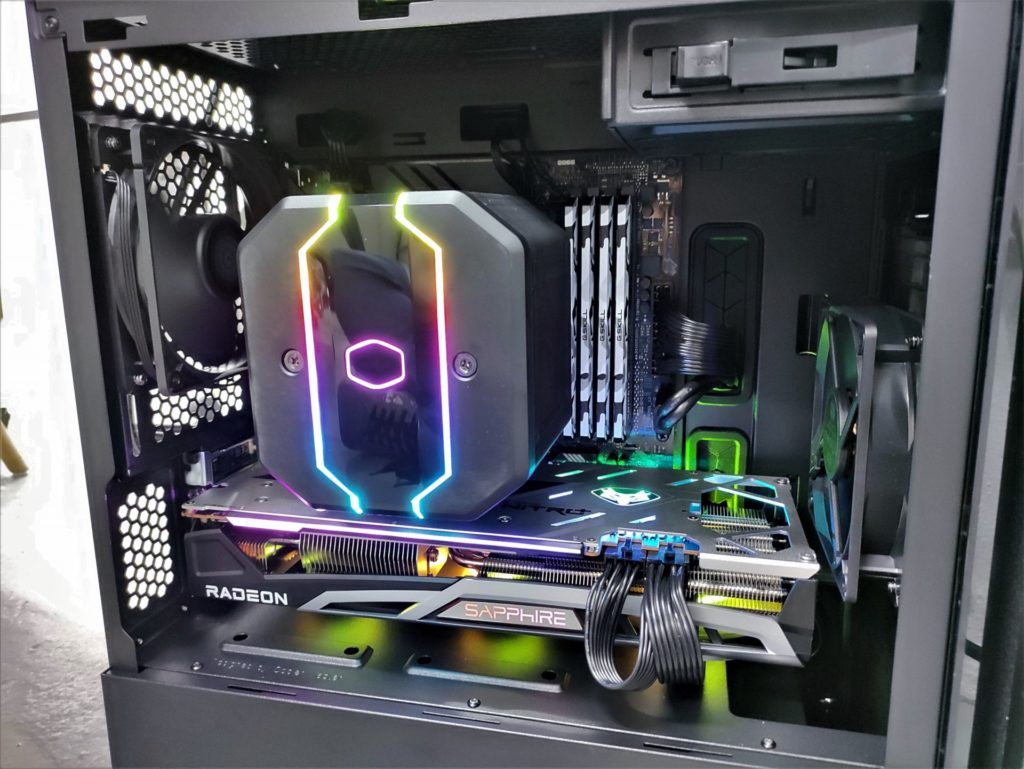 I was simply just glad that the whole build went well. The Cooler Master Silencio S400 was already designed with such huge components in mind, and we have no problems fitting our components into the system. For example, the AMD Radeon RX 6800XT from Sapphire was quite a concern for us, as we were afraid it wouldn’t fit in the case. However, we were relieved that the Silencio S400 was still able to fit graphics card of such length, allowing us to maximize the space within the case.

Moreover, the case could also fit the extra-tall Cooler Master MA620M CPU Cooler as well. As a proper CPU cooler was required for our AMD Ryzen 9 5900X, we needed something that was known for its performance. However, we didn’t want to complicate the whole build with an integrated water cooling setup. The decision going with the MA620M was great, as the whole setup looks well integrated and refined now. I’m just extra surprised at how a small Micro-ATX case like the Cooler Master Silencio S400 could fit all these high-end components all into one, without any problems with height clearance or length limitations.

Running our system with the most intensive games, powering three monitors for driving simulation and games didn’t pose any stability issues that arises from heat. This shows that the system was able to properly tame the heat coming from the power-hungry components without any hiccups. The airflow and design of the Cooler Master Silencio S400 also plays a part in ensuring that such cooling demands are met.

For those who are too bored of the usual extravagant designs found on gaming desktop cases today, the Cooler Master Silencio S400 gives a different perspective of what a gaming desktop computer can be like. It has shown itself to be capable of playing a role in taming the heat coming out from high-end components, ensuring that games can run smoothly at their intended performance.

Furthermore, the whole system still remained extra quiet as compared to other typical computer cases out in the market.

We can only say that we have no regrets in purchasing the Cooler Master Silencio S400. Its great storage expandability options, ease of installation and configuration, high compatibility with long graphics cards or tall CPU Coolers and of course its minimal and clean design has clearly showed what itself is all about. The whole PC building experience was also very smooth, thanks to all the case’s features and support. It’s S$119 well spent on this new Micro-ATX desktop case.