Samsung Galaxy S10+ VS Huawei Mate 20 Pro – Which is better?

Yesterday, Samsung revealed their latest flagship Galaxy S10 series for this year. While there were some upgrades to its hardware and specifications, was it able to keep up with other flagship smartphones by other brands? In this article, we are going to take a closer look at what the new Samsung Galaxy S10+ offers, and compare it with the 4-month-old Huawei Mate 20 Pro. Which smartphone is better? Let’s compare these two smartphones in 10 rounds of fierce comparison battles. FIGHT! 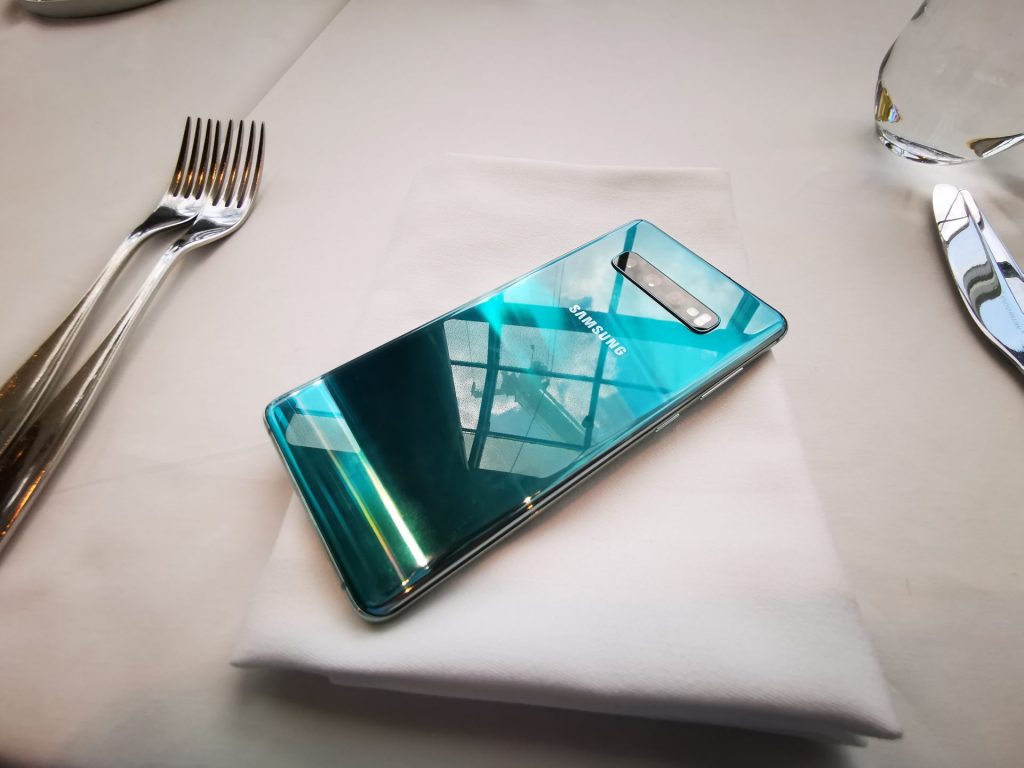 The Samsung Galaxy S10+ is one of the first few smartphones in the market with the new Qualcomm Snapdragon 855. As initial benchmark scores come online, we are certain that the Snapdragon 855 will be the highest performing mobile chipset in the market in this half of the year. Based on the Galaxy S10+ benchmark tests done by Hot Hardware, the Qualcomm Snapdragon 855 CPU was able to dominate competition, and was quite a bit ahead of Huawei Mate 20 Pro’s Kirin 980 chipset in both processing and 2D/3D benchmarks.

Moreover, even in AI based benchmarks (dated 5th Feb 2019) which Huawei has focused quite a bit on for their smartphone features, the Snapdragon 855 was able to come up on top with the introduction of the dedicated Neural Processing Unit. Perhaps, this is how Qualcomm has taken advantage of the Huawei, being the first-mover, in order to further improve on their silicon technology. This round goes to the S10+.

Round 2 : Cellular and Wireless Connectivity

Huawei being a leader in cellular equipment and telecom infrastructure should be able to gain an edge over Samsung in this area. Even though the Samsung Galaxy S10+ supports Dual SIM functions via a hybrid SIM slot, each SIM can only handle a single call at a time. It may seem that we are overly picky in these edge case comparisons, but these are required for flagship devices. On the other hand, the Huawei Mate 20 Pro offers the dual-VoLTE technology with its dual-SIM feature. It allows users to pick up calls on both SIMs at the same time.

While Huawei may have the advantage in cellular technology, the Huawei Mate 20 Pro lost out in its Wi-Fi technology. Samsung Galaxy S10 series features the new 802.11AX Wi-Fi 6 standard, which allows Wi-Fi speeds that is about 20% faster than the current standards. This also means that the Samsung Galaxy S10+ is likely to be more future proof, by supporting features that will become mainstream in the near future.

In this round, both phones have their own pros and cons. This results in a tie.

Round 3 : Battery Capacity and Charging

On the other hand, the Huawei Mate 20 Pro uses an in-display optical fingerprint sensor. Every time the fingerprint is captured, the display will have to light up brightly at a specific spot on the screen in order to read the fingerprint. Based on personal experiences, the optical sensor seems to still to perform slightly faster than the ultrasonic sensor. 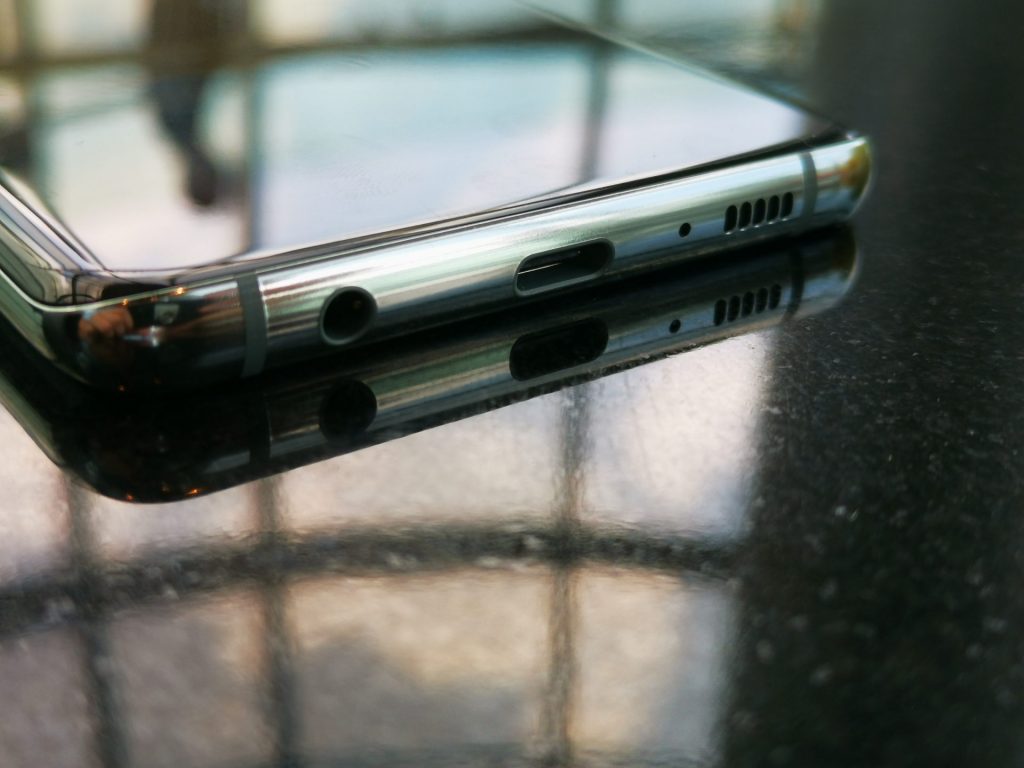 It’s a simple comparison. The Samsung Galaxy S10+ comes with a 3.5mm audio jack, while the Huawei Mate 20 Pro does not. The former wins this round.

The Samsung Galaxy S10+ has quite a dated design for their smartphones, causing the S10+ still look fairly similar to the S8 and S9 series. The Huawei Mate 20 Pro looks differentiated with a unique gradient and Twilight design, adding a certain sophisticated factor to the smartphone. This also makes the Huawei Mate 20 Pro look premium, something worthy of a flagship device. However, do take note that this could largely be a personal preference.

The Samsung Galaxy S10+ comes with a 6.4″ Quad HD+ Dynamic AMOLED, while the Huawei Mate 20 Pro uses a 6.39″ 2K+ Flexible AMOLED. By comparing these two displays, the Huawei Mate 20 pro seems to lose out quite a bit with a lower screen resolution. Moreover, its notched design is also considered dated, unlike the pill shaped hole on the Samsung Galaxy S10+ which is a lot less intrusive while maximizing the screen to body ratio.

The news came in today that both the Samsung Galaxy S10+’s camera system scored the same score as the Huawei Mate 20 Pro on DXOMARK (109). Here are some of the sample photos on both phones for comparison. In our opinion, the inclusion of a wide-angle lens on both smartphones is great. It should be a requirement for all flagship smartphones.

The samples show us that both smartphones are indeed impressive. Both cameras are able to vividly capture the color tones, and produced images that were very clear. We just aren’t sure which is better, because they were both superbly capable. It’s in tie in this round.

When we go into the details and focus on human centered designed and usability of the smartphone, we can see how these two smartphones are different. Huawei placed proper thoughts into many aspects of their smartphone, and was able to create a smooth user experience. As compared to Samsung, it just seems that they didn’t bother about usability at all. There are two jarring problems with the Galaxy S10+.

Huawei Mate 20 Pro wins in this one.

Round 10: Storage and Expansion Support 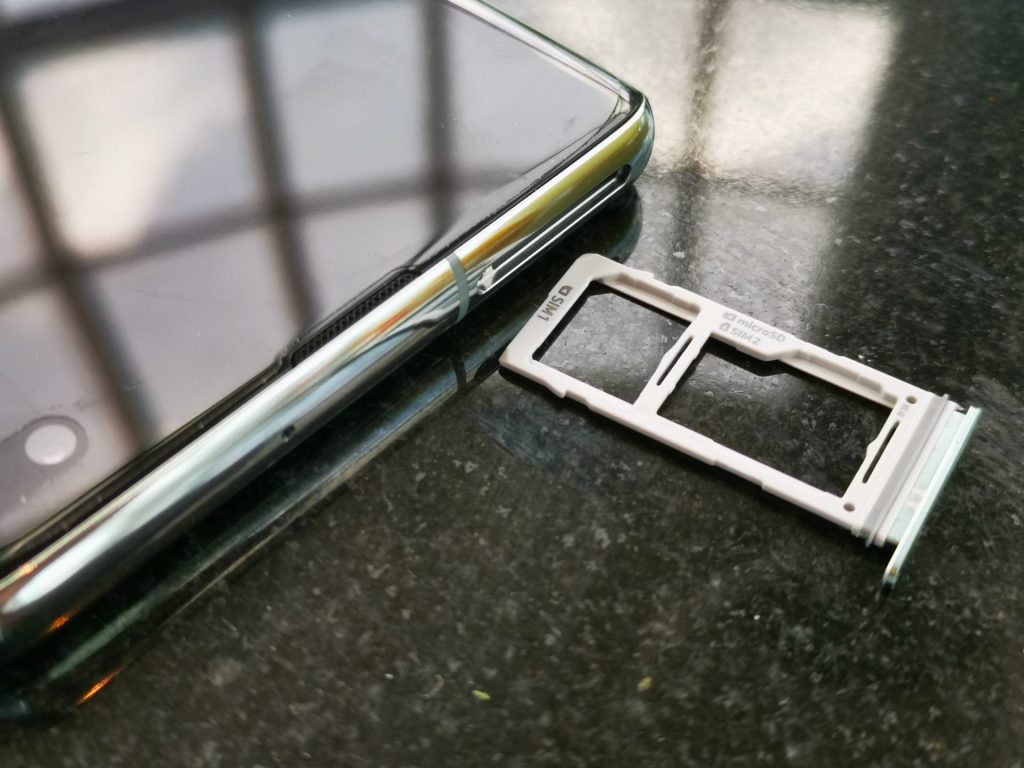 The Samsung Galaxy S10+ comes with state-of-the-art storage technology. They have utilized the new UFS 3.0, which allows read and write speeds on the internal storage memory to be much faster than the previous technologies. The Huawei Mate 20 Pro lacks in this, as it still uses the UFS 2.1 standard. Moreover, the Samsung Galaxy S10+ also supports an MicroSD expansion slot, which allows the smartphone to potentially take up even more storage space. Come to think of it, the Huawei Mate 20 Pro also supports a proprietary Nano Memory (NM) storage cards as well, but the S10+’s solution is more elegant. It’s obvious that we will get it to the S10+ in this round.

We did not know that the comparison would end up in such a close fight. Both smartphones were worthy to be named as flagships, and both had their good and bad factors. It will be a very difficult decision for us to make, which also means that consumers will find it even harder. Rather for this comparison article to be inconclusive, here are our recommendations.

If you are someone who just looks a specifications and performance, and prefer a device that is newer, go for the Samsung Galaxy S10+. However, if you want an all-rounder that is much more usable and sensible, the clear answer should be the Huawei Mate 20 Pro.

The Galaxy S10e, S10 and S10+ will be available in Singapore from 8 March 2019, at local telecommunication operators (M1, Singtel and StarHub), major consumer electronics & IT stores, Samsung Experience Stores and Lazada Singapore. The respective recommended retail prices for the devices are as follows: