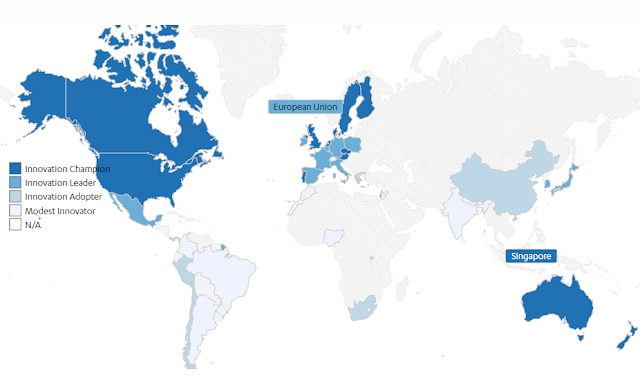 SINGAPORE
– April 5, 2018 – A new global ranking from the Consumer Technology
Association (CTA) identifies Singapore is one of 13 countries earning the
designation of 2018 Innovation Champion. CTA’s inaugural Innovation
Scorecard identifies critical areas of national policy that spur
innovation and reveals the areas in which countries may be stunting
their own futures and economic growth.
“The trend lines are clear – Innovation is encouraged where
governments, such as Singapore’s, are hospitable to new ideas,
where people enjoy great freedom and clean environments and
where innovators are embraced,” said Gary Shapiro, CEO and president, CTA. “Countries’ futures
are tied to innovation, because it will bolster economic growth
and provide future generations with the jobs they
want. Graduates entering the work force today don’t necessarily want
to stay in the factory jobs of previous generations – they want to use their
creativity and curiosity to build brighter futures worldwide.”
CTA, the largest U.S. tech trade association, conducted a
comparative analysis of 38 countries and the European Union. In addition to Singapore,
CTA’s Scorecard named Australia, Austria, Denmark, the United Kingdom, Sweden,
United States, Portugal, Finland, New Zealand, Canada, the Czech Republic and
the Netherlands as global Innovation Champions.
Singapore earned the fourth-highest composite score in the
Scorecard. It was also one of only three countries to receive an ‘A’ grade or
higher in Diversity, with the highest percentage of immigrants as a share of
its population — a remarkable 45.4 percent. The report also notes Singapore
makes no secret of its desire to become a leader in self-driving vehicles,
hosting the first-ever self-driving taxi service in 2016.
Although Singapore scores very well in the Scorecard, the country could
take actions to be more hospitable to the sharing economy. Would-be ridesharing
drivers are subject to unnecessary licensing and testing requirements, and
short-term renters face federal length-of-stay limits.
The Scorecard uses several objective criteria including whether
governments welcome disruptive business models and technologies such as the
sharing economy and self-driving vehicles; how friendly their tax systems are;
how well they protect the environment; and issues
of perennial importance such as broadband speed and cost. The
Scorecard also gauges countries on diversity; the ratio of female-to-male
employees in the workplace in key age demographics; immigrants as a share of
the national population; and freedom of thought and expression.
Other key
international findings, ranked by grade, include:
·
The countries that have, on average, the fastest and most
affordable internet connections are the United Kingdom, Finland, South Korea,
Sweden, Germany, Denmark, Austria and the Netherlands
·
The countries with the highest level of entrepreneurial
activity are Australia, the United Kingdom, New Zealand, the
United States, Singapore, Ireland and Sweden
·
The countries leading the way in self-driving vehicle policy are
Australia, Austria, the Czech Republic, France, Germany, Japan, the
Netherlands, New Zealand, Singapore, South Korea, Spain, Sweden, the United
Kingdom and the United States
CTA considered a range of indicators to determine the final roster
of countries. The Scorecard evaluates countries that fit two
guidelines: the government must be able to influence public policy; and
publicly available, verifiable and independent third-party data must exist and
can be compared with different nations. In future editions, CTA will expand the
scope of the Scorecard and include more countries.

To read more about the Scorecard, visit www.internationalscorecard.com.

About
CES Asia:
Owned and produced by the International CES
(Shanghai) Exhibition Co. Ltd. and co-produced by Shanghai Intex Exhibition
Co., Ltd (Shanghai Intex), CES Asia is the premier event for the consumer
technology industry, showcasing the full breadth and depth of the innovation
value-chain in the Asian marketplace. Key global businesses come to this new
event to grow and reinforce their brand by showcasing the latest products and
technologies to consumer tech industry executives, foreign buyers,
international media and a limited number of consumers from China. Attendees
have exclusive access to some of the largest brands from China and around the
world, while celebrating the innovation that defines the consumer technology sector.
About
International CES (Shanghai) Exhibition Co. Ltd. and CTA:
International CES (Shanghai) Exhibition Co. Ltd. is
a wholly foreign-owned enterprise by the Consumer Technology Association (CTA),
a trade association representing the $321 billion U.S. consumer technology
industry, which supports more than 15 million U.S. jobs. More than 2,200
companies – 80 percent are small businesses and startups; others are among the
world’s best known brands – enjoy the benefits of CTA membership including
policy advocacy, market research, technical education, industry promotion,
standards development and the fostering of business and strategic
relationships. CTA also owns and produces CES® – the world’s gathering place
for all who thrive on the business of consumer technologies. Profits from CES
are reinvested into CTA’s industry services.
About
Shanghai Intex:
Shanghai Intex Exhibition Co., Ltd was originally
the exhibition organizing business of Shanghai Intex, a pioneering exhibition
organizer established in 1995. Shanghai Intex is jointly overseen by the China
Council for the Promotion of International Trade (CCPIT) Shanghai and PNO
Exhibition Investment (Dubai) Limited. Starting in 1998, Shanghai Intex has
organized over 100 trade shows and conferences with a sum total exhibition
space in excess of 2 million sqm. Shanghai Intex is comprised of professional
teams with a wealth of experience in organizing major international events,
covering the creative industry, healthcare, lifestyle, advanced manufacturing
and consumer electronics.
UPCOMING EVENTS