Yahoo unveils 2017 Year in Review for Singapore
Geopolitical issues remained at forefront of national
consciousness as crisis in Myanmar, North Korea and the Philippines dominated
search
Domestic concerns from the Presidential Election to MRT
breakdowns grabbed top local headlines
SINGAPORE, 13
December 2017 – Yahoo today
announced its 2017 Year in Review (YIR) for Singapore. The YIR is an annual
recap of the top search trends, happenings and events which caught the
imagination of Internet users in Singapore, based on users’ daily search habits
and an editorial selection of what they read, recommended and shared most on
Yahoo in 2017.
Prime Minister Lee
Hsien Loong was the favorite topic
for Singapore, leading the list of Top 10 Singapore Searches in
2017, up from 4th place in 2016. News about the Lee family were also among the
most read in the country, with Singaporeans riveted by the dispute over the
fate of No. 38 Oxley Road and the subsequent contempt of court case against Li
Shengwu, Prime Minister Lee’s nephew and the grandson of the late Minister
Mentor Lee Kuan Yew.
The second most
searched topic was the battle for Marawi, the five-month-long armed
conflict in the Philippines between militants and the country’s security
forces. It is followed by searches on politicians, with President Halimah Yacob
taking third place followed by Donald Trump, Rodrigo Duterte and Kim Jong
Un.
The list was rounded
off by searches on North Korea and Harvey Weinstein, taking the 9th and 10th
spots respectively. Tension in the Korean peninsula has been increasing
throughout the year, and missile tests launched by Pyongyang as recent as last
month continue to fuel concerns. The fall of the once-powerful Hollywood mogul
Weinstein, while late in the year, has created a tide taking down other elites
in the media and entertainment industry and is expected to usher in a more
transparent era about sexual abuse and harassment. 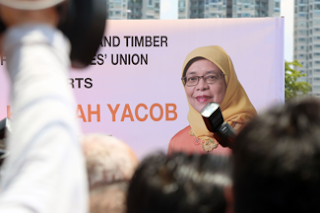 Besides domestic
affairs of the Lee family, politics remained high on the list of Top 10 Singapore Headlines. News
about Halimah Yacob’s walkover election as Singapore’s President and Worker
Party’s leader Low Thia Khiang’s plan to step down next year were in the top
five of headlines. MRT flooding, breakdowns and collisions were also high on
the list, taking the number two headline spot.
A mix of issues
covered the rest of the national headlines, including a Yahoo News Singapore
investigative piece which took the 6th ranking and uncovered the extent of
brothels operating in heartland neighborhoods, while this year’s only food
related headline was relatively modest at number nine with the Nasi Lemak
burger mania.
“2017 appears to be a
year when local and international news are increasingly gaining equal footing.
National headlines involving the Prime Minister and the country’s first woman
president were not surprisingly on top of Singaporeans’ minds. But trending
entries such as Harvey Weinstein, tensions in North Korea, and crisis and
disputes in the region show that Singaporeans are seeking to understand more
about major geopolitical events that are shaping our world and the potential
threats in our backyard,” says Elena Torrijos, editor-in-chief at Yahoo
Singapore.
Scroll down for the
complete lists mentioned above.
Top 10 Singapore Searches of
2017
1.
Lee Hsien Loong
2.
Marawi battle
3.
Halimah Yacob
4.
Donald Trump
5.
Rodrigo Duterte
6.
Kim Jong Un
7.
Rohingya crisis
8.
Abu Sayyaf
9.
North Korea
10.
Harvey Weinstein
Top 10 Singapore Headlines of
2017
1.
The Lee family feud
over Oxley Road home
2.
Bumpy year for SMRT
and commuters
3.
A Presidential race
that never was
4.
AGC files contempt of
court charges against Li Shengwu
5.
Workers’ Party leader
to step down
6.
Brisk business at
heartland brothels
7.
Staff shake-up at
local media giant SPH
8.
Big win for local
comic artist Sonny Liew
9.
Buzz over Nasi Lemak
burger
10.
Jailed in Abu Dhabi
About the Yahoo
Singapore 2017 Year in Review Methodology
To develop the Yahoo
Year in Review, our editors analyze user’s interest patterns on what they
searched for, read, recommended and shared. It takes into account a number of
factors including absolute volume and growth from previous periods to see which
themes and trends bubble to the surface. Individuals and their preferences
always remain anonymous. In addition, our editors also exercise their editorial
judgment to decide which topics had the greatest significance and public
resonance in the year.
Disclaimer:* Please
note the results are not a representation of a popularity contest or voting, it
is done by Yahoo editorial team experts.
About Oath
Oath, a subsidiary of Verizon, is a values-led
company committed to building brands people love. We reach one billion people
around the world with a dynamic house of media and technology brands. A global
leader in digital and mobile, Oath is shaping the future of media. For more on
Oath, visit http://www.oath.com.