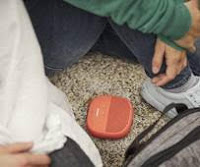 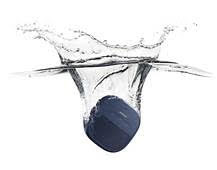 December 11, 2017 – Today, Bose introduced the SoundLink® Micro Bluetooth® speaker, its smallest, most rugged, portable speaker yet. Measuring just 9.5cms wide and deep, 3.8cms high, and weighing a mere 290 grams, the Micro is tiny — until you turn it on. With unmatched sound for its size, and tested beyond its IPX7 waterproof rating, the Micro lets you enjoy music, take and make calls, and access Siri or your Google Assistant – out loud and anywhere, like never before.
“For listening on-the-go, there’s nothing quite like the Micro,” said Brian Maguire, director, Bose on-the-go products. “No other Bluetooth speaker this small sounds this good – so you’ll never want to leave it behind. And it’s been built for just about anything, so you’ll never have to.”
The Micro is packed with technology. A new custom transducer, miniature dual-passive radiators, and a rechargeable lithium-ion battery were engineered together – as a micro-system. Cm-for-cm, the Micro delivers a different kind of mobile audio – up to 6 hours of surprisingly loud-and-clear audio and low bass – from an enclosure that fits entirely in the palm of your hand.
The Micro is tough. It will survive Singapore’s scorching heat, monsoon rains, and is more than the industry’s IPX7 rating. Waterproof from the inside out, it was made and tested to withstand soapy water, chlorinated water, and salt water. In the rain, dropped in the sink, pool, or ocean, the Micro will keep playing. Its soft silicone exterior protects it from scratches, dents, cracks, hits, falls, dust, dirt and sand. And an equally durable strap on its flip-side attaches easily to bags, backpacks, bikes, coolers, and other gear.
The Micro is friendly. It uses simple voice prompts for Bluetooth pairing, has an integrated speakerphone, and a multi-purpose button to take calls, make them, and access your VPA with one push – without grabbing your phone. When used with the Bose® Connect app, it can sync with other SoundLink speakers for Stereo Mode (left-right channel) or Party Mode (to play music simultaneously).
COLOURS, AVAILABILITY, PRICING
The new SoundLink Micro comes in Black, Midnight Blue, and Bright Orange. It will be available beginning December 11, 2017 for S$179 at authorised Bose dealers.
THE SOUNDLINK OBSESSION
Bose SoundLink speakers are globally recognised as the standard for mobile audio. The original SoundLink Mobile speaker redefined the Bluetooth speaker category with revolutionary performance from a portable design. The SoundLink Mini took the market by storm with an entirely new level of sound quality from an even smaller design. The SoundLink Colour became a hit with its rugged design and colours. The Revolve and Revolve+ ushered in the next generation of SoundLink with powerful, full 360-degree performance. And today, the tiny and tougher Micro joins the family, engineered with the same obsession that started it all – to make the smallest, best sounding wireless speaker ever.
ABOUT BOSE CORPORATION
Bose Corporation was founded in 1964 by Dr. Amar G. Bose, then a professor of electrical engineering at the Massachusetts Institute of Technology. Today, the company is driven by its founding principles, investing in long-term research with one fundamental goal: to develop new technologies with real customer benefits. Bose innovations have spanned decades and industries, creating and transforming categories in audio and beyond. Bose products for the home, in the car, on the go and in public spaces have become iconic, changing the way people listen to music.
Bose Corporation is privately held. The company’s spirit of invention, passion for excellence, and commitment to extraordinary experiences can be found around the world — everywhere Bose does business.