–       Vainglory’s
Singapore World Championships 2017 sees the game returning to the nation where
the first beta of the game was launched in December 18, 2013

–       Singapore’s Team
Impunity is one of the top 12 global teams competing for the title
–       Increased prize pool
of USD 140,000, one of the largest in Southeast Asia region for mobile MOBA
esports 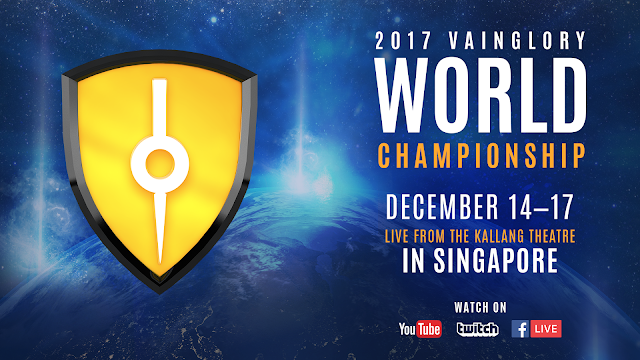 Singapore — September 28,
2017 — Super Evil Megacorp, the US-based creators of the world’s leading mobile
e-sport game Vainglory, has selected
Singapore as the venue for its second world championship finals. Vainglory
World Championships 2017 will take place at the Kallang Theatre in Singapore
from December 14 to 17 where the top 12 Vainglory teams from the world will
converge to fight for the prize pool of USD$140,000. This is an increase from
last year’s prize pool of USD$120,000 prize pool where it was held in
Hollywood, California, USA. It also comes at a time when esports is reaching
out to mainstream audiences with significant increases in winnings globally and
in this region. Fans in Singapore seeking to watch the event live can register
for their free tickets from Vaingloryworlds2017.peatix.com.
“The
2017 Vainglory World Championship will not just be the pinnacle of our esports
year; it will be arguably the biggest moment in Vainglory history,” said
Super Evil Megacorp CEO Kristian Segerstrale. “Live on stage in Singapore,
we will globally unveil Vainglory 5v5 in an epic showmatch, coinciding with a
major in-game update. This moment will show, once again, that Vainglory is the
most uncompromising, unapologetically core MOBA on touchscreens — and a game
pushing the very boundaries of the mobile platform.
“When
deciding where to crown the World Champion and celebrate the rebirth of our
game, we had to return to where it all began: The players in Singapore first in
beta, and then widely Southeast Asia, embraced Vainglory before anyone else and
paved the way for all the success that has followed. And as we embark on a new
adventure with 5v5, Southeast Asia will once again be a central strategic and
community focus. We intend to prove to MOBA players in SEA that Vainglory is
the most-fun, best-performing 5v5 experience out there, and we look forward to
working closely with the local communities to make it the best it can
be.”
The game has come a long way since it first launched, and
is now played in over 250 countries around the world. The mobile MOBA has been
featured at the keynote launches of leading smartphones including the iPhone 6
in 2014 and at the more recent Samsung Galaxy Note 8 in New York this month. Having
made its mark around the globe, Vainglory – then known as Kindred – returns to
where it first launched as a beta back in December 2013.
“In a way, we are bringing Vainglory back to its first
home,” added Heini Vesander, Executive Producer, esports.
This year’s tournament will see the players compete in
front of a live audience at the historic Kallang Theatre as well as being
streamed globally through leading streaming platforms such as Twitch, Youtube,
and Facebook. Leading shoutcasters in four languages from around the world will
also be joining the exhilarating event that will place Singapore on the global
map as one of the increasingly popular locations globally for esports.
After
a year of competitive challenges among 5000 teams across six regions in the
world – North America, South America, Europe, Southeast Asia, East Asia and
China – seven teams have already qualified for a spot in this year’s world championships.
Joining them is Singapore’s very own Team Impunity who qualified for one of the
coveted spots by winning the recent regional championships held in Jakarta
earlier this month. Team Impunity will be joined by defending champion Rox
Armada from Korea, North America’s Cloud 9, Korea’s ACE Gaming, Indonesia’s
Elite8, Japan’s DetonatioN Gaming and China’s Hunters. Remaining teams will
continue to compete in their respective regional qualifiers to fight for one of
remaining six seats.
Team Impunity fought off fierce competition on their way to qualifying
for the World Championships 2017, including a dramatic 3-2 comeback win against
regional rivals Infamous at the recent Jakarta Summer Championship earlier this
month. Their wins will go some way in boosting their confidence as they look to
show off their mettle against the best teams from around the world.
“We are elated at being able to
challenge for the world title on our home soil, but will certainly be careful
not to get carried away,” said Check Ho, coach of Team Impunity “We are
relishing the challenge of playing some of the best Vainglory teams around and
hope that our performances will go some way in helping to show how far
Singapore has come in esports.”
Meanwhile, teams in Southeast Asia
who have yet to qualify for the World Championship will be eyeing the remaining
Wildcard slot as they ready themselves for the Vainglory8 Autumn Season, which
starts on September 30. Fans from around the region who want to watch can
stream it from facebook.com/vainglorygame and https://www.youtube.com/user/vainglorygame.
To keep up with the action or for fans unable to
attend the World Championship in Singapore, Vainglory Worlds will be streamed
live on Vainglory’s Twitch.TV and YouTube
channels. Vainglory is available as a free download from the Apple App Store,  Google Play and the Amazon Appstore. To find out more about the Vainglory World
Championship check out the Vainglory Esports page.
__________________

Advancing collaboration in healthcare through technology, information, and data at HIMSS AsiaPac17