SkillsFuture leading the way to fill crucial IT skills shortage

SkillsFuture leading the way to fill crucial
IT skills shortage
·  61% of Singaporean CIOs say the government’s SkillsFuture
initiative has helped their IT staff to upskill, 43% believe it has aided the skills shortage in the IT industry, 31%
say it has helped make Singapore a good place to work for IT professionals.
·  56% state they are confident about Singapore’s IT workforce
developing the right skills to adapt to future market changes.
·  67% think more external training initiatives are needed to fill
the IT skills gap in Singapore, 51% believe there needs to be greater focus on IT education in schools, 33% say
more internal training initiatives within companies is needed.
Singapore, 14
September 2017 – Independent research
commissioned by specialised recruiter Robert Half reveals
the impact the government’s SkillsFuture initiative has had so far on
Singapore’s IT sector. According to the research, which surveyed local CIOs,
more than six in 10 (61%) Singaporean CIOs say the initiative has helped IT
staff within their organisation to upgrade essential skillsets, and more than
four in 10 (43%) believe it has helped alleviate the crucial skills shortage in
the city-state’s IT sector. 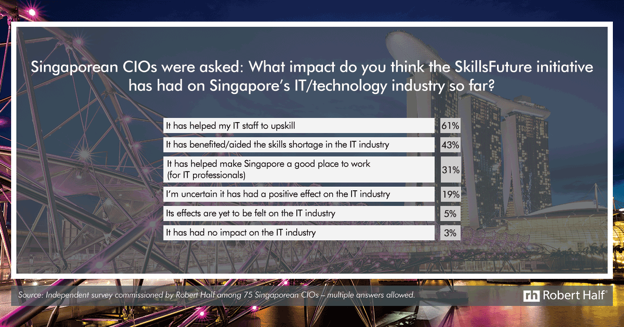 In more good news for
the economy, almost one in three (31%) CIOs say the SkillsFuture initiative has
helped promote Singapore as an attractive place to work for IT professionals.
This positive sentiment is emphasised by the fact that Information and
Communications Technology (ICT) is the most popular training area used in the
SkillsFuture initiative, particularly for young Singaporeans who have enrolled
in numerous IT courses such as data analytics[1].
Almost one if five
(19%) IT leaders are still uncertain whether the initiative has had a positive
effect on the tech industry, and 5% saying the effects are still yet to be
felt.
Matthieu
Imbert-Bouchard, Managing
Director at Robert Half Singapore said: “The local workforce
has much to gain from SkillsFuture, which helps equip Singaporean workers with
the skills they need to excel in today’s competitive working environment. This
is especially true for those in the IT industry, where workers are constantly
faced with new technologies and innovations that can disrupt the industry.
SkillsFuture represents a positive step forward to fill the skills gap in the
IT industry, enabling CIOs to keep their organisations competitive by training
their staff with the most up-to-date technological skillsets, while also
improving employment opportunities for individual workers.”
Despite the
government’s initial aim to help Singaporean’s upskill in essential skills,
some hesitancy still remains among the city-state’s IT leaders. Despite more
than half (56%) of CIOs being “completely” or “mostly” confident in the IT
workforce’s ability to upskill, more than four in 10 (44%) are only “somewhat”
or “not at all” confident about the ability of the Singaporean IT workforce developing
the right skills to adapt to future market changes.
Singapore’s growing
skills shortage has only accelerated as the vast majority (92%) of CIOs find it
more challenging to source qualified IT professionals compared to five years
ago. To combat this, IT leaders are stipulating that more needs to be done at a
training and educational level, with more than two in three (67%) thinking that
more external training initiatives are needed to fill the IT skills gap in
Singapore. Just over half (51%) believe there needs to be greater focus on IT
education in schools, and one in three (33%) say more internal training
initiatives within companies is needed.
“Besides tapping into
government-led initiatives and opportunities, Singapore’s IT leaders need to
take a proactive approach to upskilling their employees. This means
implementing measures to better equip their staff with the skills necessary for
today’s workforce, while also encouraging them to tap into initiatives such as
SkillsFuture. This will not only ensure that workers improve their performance,
but also embeds progressive upskilling and professional development in
Singaporean work life,” Matthieu
Imbert-Bouchard concluded.
Singaporean CIOs were
asked: “Thinking of the challenges with the IT skills gap in Singapore,
what steps do you think need to be taken with regards to training and
education?”
Source: Independent
survey commissioned by Robert Half among 75 Singaporean CIOs – multiple answers
allowed.