AdColony Announces
Publisher Survey Results For APAC
Rewarded videos drive best user experience and most effective
for monetisation
SINGAPORE, 6 September, 2017 – In the first of
its kind Summer 2017 Publishing Survey, AdColony, the largest independent mobile advertising platform, has found that
mobile app publishers in APAC believe ads drive better monetisation over in-app
purchases.
The survey interviewed respondents from over 20 of Asia-Pacific’s top
mobile gaming publishers with a user base of over five million.
Monetisation 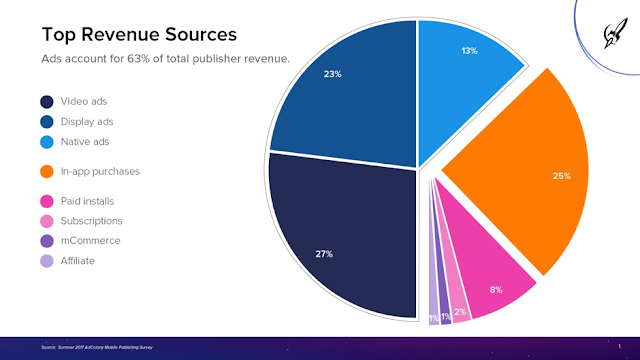 Top revenue
sources of mobile publishers
According to the survey, respondents stated that advertising accounts
for 63% of their mobile publisher revenue. The largest contributor to this
category was mobile video at 27%, followed by display at 23% and native ads at
13%.
Outside of advertising, the single-largest revenue contributor was
in-app purchases (25%), while paid installs or subscriptions was a meagre 8%.
Monetisation Effectiveness 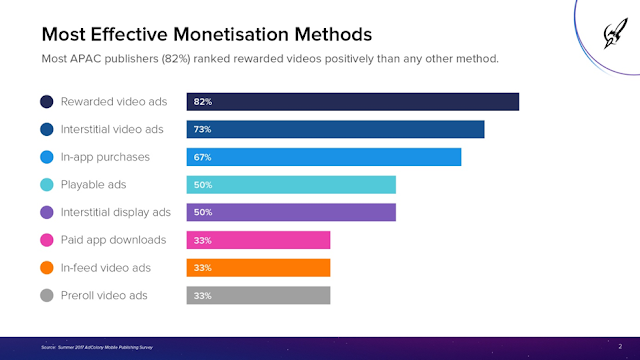 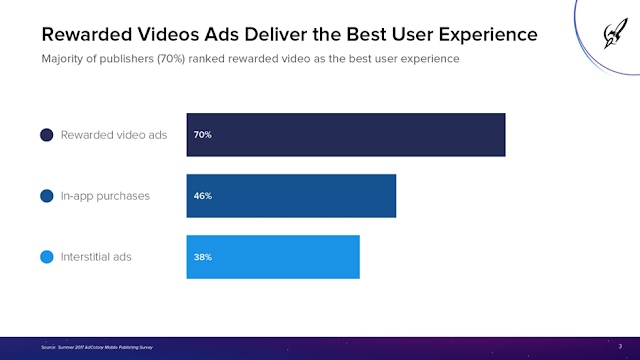 Top user experiences of mobile publishers
When it came to offering users the best user experience when engaging
within gaming apps, a majority of publishers (70%) believed rewarded videos
offer a positive user experience. In-app purchases (46%) and interstitial ads
(38%) were also regarded as a relatively positive user experience (46%).
According to Vikas Gulati, Managing Director of AdColony, Asia Pacific,
“Aside from providing the best user engagement, rewarded ads –
or otherwise known as “opt-in” ads, have a higher chance to increase in-app
conversion as it incentivises freemium users before they can unlock premium
content.”
Commenting on
the general trend of monetisation, Gulati said: “In our experience, publishers,
just like marketers, are looking to cut through the clutter of advertising
with high-quality product that helps them target the right
consumers via an engaging creative experience.”
He concluded: “At AdColony, we create ads that matter – those which help
publishers monetise and our marketers engage with the users. Ultimately, ads
which capture user attention hold the key to good advertising.”
About AdColony
AdColony is
one of the largest mobile advertising platforms in the world with a reach of
more than 1.5 billion users globally. With a mission to elevate the state of
mobile advertising by focusing on the highest quality consumer experiences that
deliver outcomes for brands and publishers on today’s primetime apps and sites,
AdColony is trusted by Fortune 500 brands and more than 85% of the world’s top
grossing mobile publishers. Known for our exclusive Instant-Play™ HD video
technology, proprietary rich media formats, our global performance advertising
business and programmatic marketplace, and our extensive ad SDK footprint in
the Top 1000 apps worldwide, we are passionate about helping brands connect
with consumers at scale on the most important screen in their lives. A
fully-owned subsidiary of Opera ASA, AdColony is a global organization with
over 20 offices worldwide.
About AdColony Summer 2017 Mobile Publishing Survey
The
AdColony Summer 2017 Mobile Publishing Survey was distributed globally, with
the most respondents in EMEA (40%), followed by 34% in North America, 22% in
APAC, and 4% in LATAM. Respondents primarily represented mobile game developers
(82%), with a minority making non-gaming
apps (18%). A small number (8%) represented mobile publisher who make both
gaming & non-gaming apps.
The full
survey can be downloaded here.