We are at a stage where smartphone innovation is at its saturation point. Manufacturers, designers and engineers are at their limits when it comes to finding new technology to include in their new smartphones. However, neither do they fundamentally change anyway of how these smartphones operate nor do they make life easier. In the more recent 2 to 3 years, the only “innovation” was simply an upgrade of the phone’s processor and chipset that allows for better performance and longer battery life. Or perhaps a slightly changed design with a better display with a higher resolution. Where is the real innovation?

Fundamentally, we are at a stage where a smartphone’s computational capabilities far exceed the requirements of the everyday user. There is no need to upgrade your smartphone every one or two years, as the newer phones will probably perform the same functions as well as your previous device. However, we do accept that phones unique in their own aspects – Some have a better camera, while others could feature better speakers or boast a longer battery life. Is there a phone that is the best when it comes to every feature? 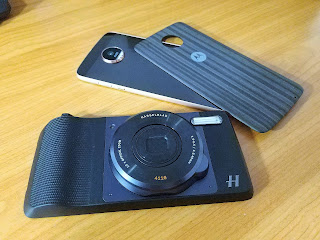 The now defunct Project Ara from Google targeted such a problem, but failed to bring an actual working product to the market due to the multitudes of challenges. However, the Motorola Mobility group has brought the remnants of Project Ara to life, with their Moto Z series of smartphones. Launched a year ago, the Motorola Moto Z is poised for innovation in the next generation of smartphone devices. With the compatibility with Moto Mods, which are compatible add-ons to the main device, the new concept opens up a whole new world of usability and flexibility with the use of a smartphone. 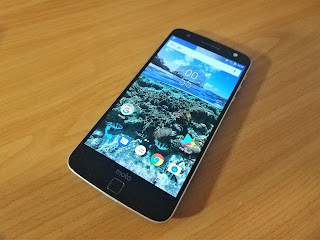 Motorola started the whole Moto Z series with a bang. Understanding that consumers want a smartphone that can perform well in terms of its responsiveness, they equipped the Moto Z with the Qualcomm Snapdragon 820 processor. This was the flagship chipset from Qualcomm last year during the launch of the Moto Z, and is still considered one of the best performing mobile chipset in the market today. The Snapdragon 820’s computational performance is sure to be sufficient for most mainstream users for the coming 2 to 3 years to come, before any transformational mobile chipset deems it obsolete. The choice of this flagship mobile chipset also put consumers’ mind at ease, as they can simply purchase Moto Mods to enhance the features of their smartphone, instead of buying a new smartphone every year.

Let’s put the discussions aside and take a real look at what the Moto Z is all about. For a start, the Moto Z is an extremely thin and light (5.2mm thin and weighs 136g), but it is also a high performance smartphone. The designers at Motorola has decided to give the Moto Z a rather minimal design, so as to capture the attention of the mass market. However, it must be taken note that the smartphone lacks a standard 3.5mm audio jack, which seems to be part of the trend in new smartphones these days. 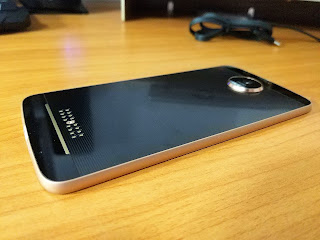 The Moto Z comes with a 5.5 inch 2560 x 1440 display. This high pixel density display makes images really stand out as compared to usual 1080p displays. Other than the 1.8GHz Snapdragon 820 processor that was mentioned earlier, the Moto Z also comes with 4GB of dedicated RAM. It also has a 64GB of internal storage, which can be expanded with a microSD card. The Moto Z is powered by a 2600mAh battery. 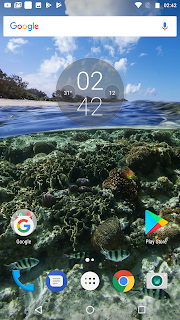 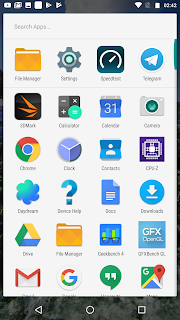 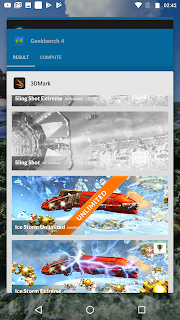 In terms of user interface, Motorola has adopted a design that looks exactly like stock Android. It uses a standard Android stock home screen with Google Android’s default launcher. The Moto Z is possibly one of the phones to look out for, if you are someone who is very picky with preinstalled 3rd party apps, as the Moto Z comes with none of those. Just straight up 100% stock Android experience out of the box, giving you a feel of what Android should be all about as designed by Google’s Android group.  Moreover, with a recent firmware upgrade, the Moto Z can now be equipped with the latest Android 7 Nougat platform. This smartphone will adopt all the different features from Android 7.

In terms of performance, the Moto Z excels well in different kinds of workloads. For smartphones, the most intensive workloads are games. It is not easy to compute graphics, sound and math altogether at the same time. Therefore, game benchmarks are the best to determine the performance of a smartphone. We are going to use synthetic graphics/games benchmark tests, so as to have a comparison with the other models of smartphones in the market. 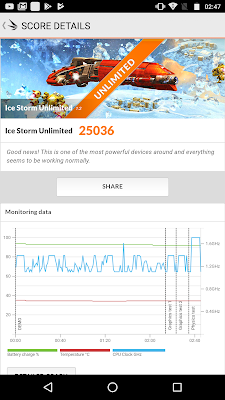 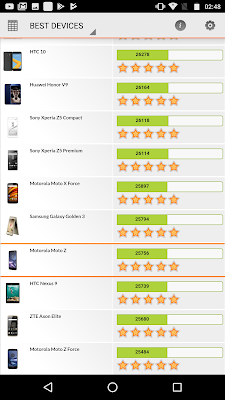 3DMark Ice Storm Unlimited shows that the Moto Z scored 25036, which is about the performance of most flagship smartphones of last year. 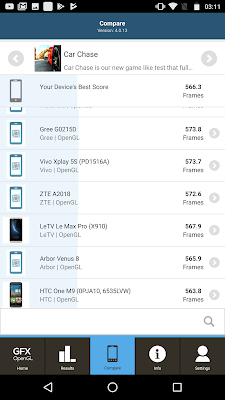 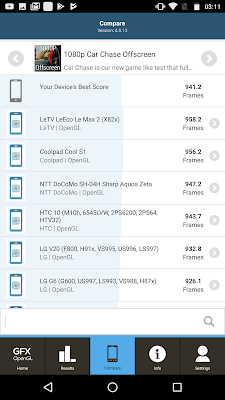 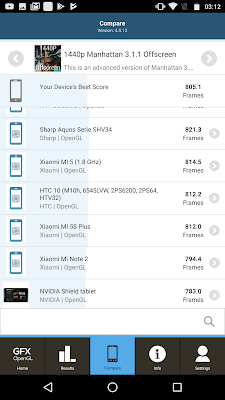 GFXBench also showed a similar result. More interestingly, we can see that the Moto Z was able to perform similarly to the Xiaomi MI 5S Plus in the 1440p Manhattan benchmark, even though the MI 5S Plus was utilizing a newer Snapdragon 821 processor. It should also be noted that most smartphones only had a FullHD 1080p display, and that the Moto Z’s 2560 x 1440 display makes games look better (if you look somewhat closely). 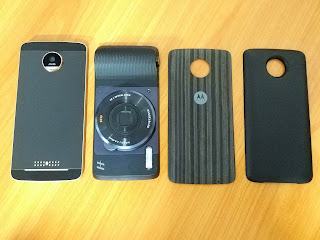 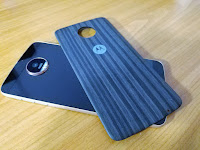 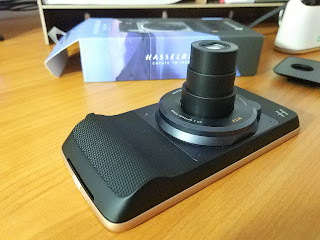 It is almost impossible to integrate a zoom camera into a compact smartphone. That is why, Motorola worked with HasselBlad to come out with the True Zoom Moto Mod instead. With more than 70 years of expertise in camera and lens design and manufacturing, Hasselblad will be able to bring the best possible designs into a compact Moto Mod for consumers.

Let us compare between the images taken from the HasselBlad True Zoom Moto Mod, the Moto Z’s built-in camera, and a Xiaomi Mi 5S.

In these three images, we can see that the HasselBlad, Moto Z and Mi5s all took images of similar quality. On automatic settings, the HasselBlad seems to have a darker image, as the trees as the background were not as well-lit as the other two images. The photo from the HasselBlad True Zoom also seems like be slightly bluer than the other two photos, and was able to show more details in the sky.

On the other hand, the Moto Z’s camera performed considerably well too. As compared to the Mi5s, the Moto Z managed to capture more light, as seen from the details on the trees. It also represented the colours from the composition very well, as the image appears to be very rich.

Undoubtedly, the HasselBlad True Zoom camera will show its advantages when it comes to zooming. As it has got the hardware for optical zoom, images taken from the zoom lens will legitimately have much higher quality than those from digital zoom. The benefits of the HasselBlad True Zoom Moto Mod is very apparent. This Moto Mod is a great attachment for those seeking for a set of high quality zoom lens fitted right onto their Moto Z. 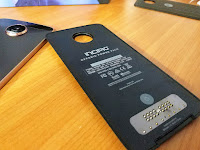 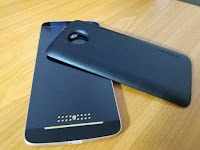 Some may say that the 2600mAh battery capacity of the Moto Z could be insufficient for a full day usage. Foremost, the Moto Z was able to last us for a full day on a charge, based on our own daily usage of social networking, communications and entertainment. If you would like to game on the go and are afraid of running out of juice, there’s a Moto Mod for that. This power pack provides an additional 2220mAh of battery capacity to your phone. This equates to up to 22 hours of additional battery life. As the Incipio offGrid Power Pack snaps right on the back of the Moto Z and seamlessly integrates with the design, it is virtually unnoticeable. 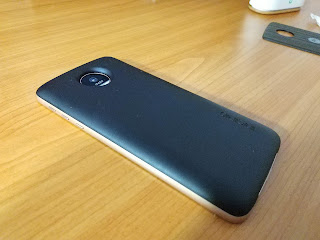 By having an elegant design and high performance, the Moto Z is poised to be one of the best smartphones in the market. It is also ingenious to design a modular smartphone to have Moto Mods to further the capabilities of a typical smartphone. A modular design also results in a smartphone that will be able to adapt to different lifestyles or occasions when required.

The Moto Z represents a path to the next generation of smartphone innovation. It has fundamentally changed the way of how we think about smartphones today, and will be an exemplar to the whole modular smartphone concept.

We are definitely looking forward to the new Moto Z2, which will likely to be launched within the weeks or days to come. More types of Moto Mods will also be available with the launch of the new flagship from Motorola.

Are you ready for the insurance world of 2025?