REVIEW OF THE HTC U ULTRA – IT’S ALL ABOUT U?

REVIEW OF
THE HTC U ULTRA – IT’S ALL ABOUT U? 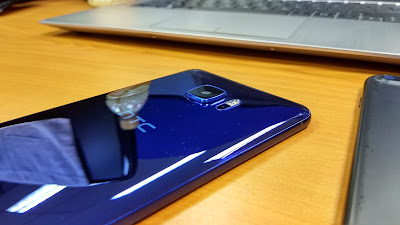 The HTC U
Ultra smartphone is a 5.7-inch device that was launched earlier in February 2017. This new flagship smartphone was designed with the
end-user in mind, and is marketed to be made for the brilliant U. In this
review, we will find out if this smartphone really performs to our expectation
of what we want, or if ‘U’ is just an imaginary concept that
HTC has made up.
One of the
most beautiful smartphones in the market 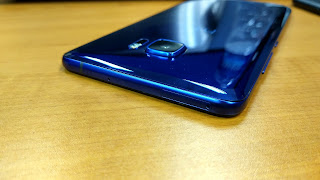 The HTC U
Ultra stands out from any other smartphones in the market with its design. HTC
has adopted a rather simple aesthetic to showcase the sophistication of
the smartphone. The rear of the enclosure is made of a highly reflective
material, which HTC calls a “liquid surface”. This new design seems to make the
iPhone 7 Plus design so much more duller in comparison, but we understand that
design is a matter of personal preference. 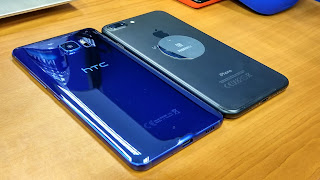 Sadly, the
full glass design of the HTC U Ultra is highly susceptible to fingerprints.
This could possibly be why HTC has also included a transparent cover in the
package to protect the smartphone’s enclosure.

High-end
Specifications for a flagship device
Any flagship
phone has to feature a top-end computing chipset, and is the case for the HTC U Ultra. The device is equipped
with the Qualcomm Snapdragon 821 mobile chipset, one of the fastest
mobile chipset available on the market. Many high-end
smartphones such as the LG G6, Google Pixel, Xiaomi Mi MIX and One Plus 3T are also equipped with the Snapdragon 821.
Sadly, the HTC U Ultra was recently launched early this year. This meant that they have missed
the even faster flagship Qualcomm Snapdragon 835 chipset that is powering the new Samsung
Galaxy S8. Nonetheless, the Snapdragon 821 is still a force to be reckoned
with. Here are some performance and gaming benchmarks to let you know how fast this device performs. 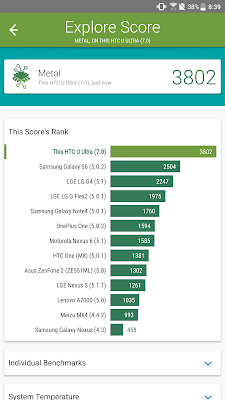 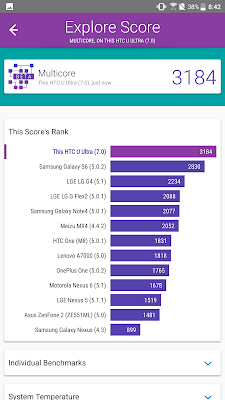 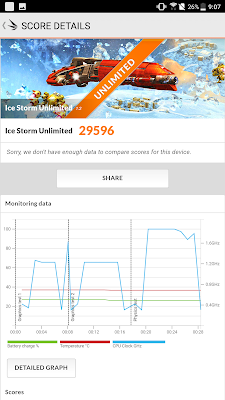 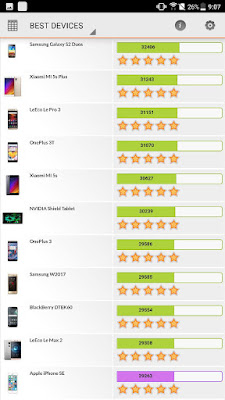 Instead of
having multiple versions of HTC U Ultra with different storage capacities,
all SKU of the HTC U Ultra comes with 64GB of internal storage (with the
exception of a 128GB Sapphire Glass edition). This can also be expanded with a microSD card, allowing for a customized storage expansion, showing the device is designed for ‘U’ in mind.
Performance
and responsiveness are one of the main factors for having a great user experience on a smartphone. The quality of experience depends on individual hardware that interfaces with the user. Here are our thoughts on the other key aspects of the smartphone. 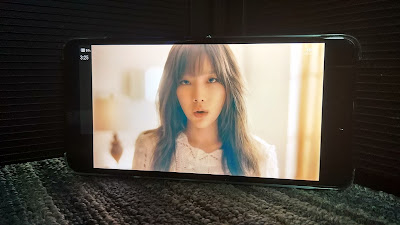 The HTC U
Ultra comes with a Quad HD 5.7 inch 2560 x 1440 resolution display. To put it simply, the HTC U Ultra has an ultra clear display with such a high resolution and pixel density. Based on our experience, watching movies and shows from YouTube were great. Images were well represented with accurate and vibrant colours, making it very suitable for entertainment and media consumption. Not to mention. the glossy gorilla glass also
enhances the whole visual viewing experience. 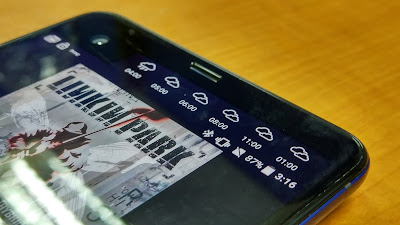 However,
it was heart breaking to have the 2nd display at the top of the main
screen to ruin it all (see music video image above). While watching videos or playing games in full-screen,
the additional display can easily distract the users due to its exceptionally
“bright” black. This is even more apparent in dimly lit/ dark scenarios.
Good audio
qualities from Speakers and Headphones

A good
entertainment experience is not solely dependent on visuals, with audio experience
being equally important. We were glad that the speakers on the HTC U were
considerably decent, as it could reproduce a good range of frequencies. The trebles were distinct, and even though there was no focus on the bass and lows, the overall audio profile was still acceptable. 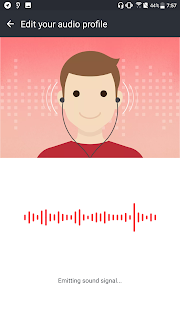 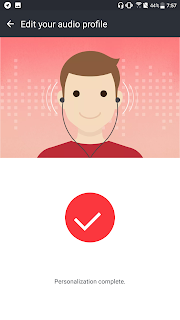 HTC has
boldly removed the 3.5mm audio jack from the HTC U Ultra. Although we felt that such a move could upset many, they compensated with
a USB Type-C audio headset. These headsets are said to have the ability to learn your ear canal shape, and customize an accurate audio profile that suits the user best.
We were highly skeptical of such a technology, as audio preference is a
largely subjective matter. This was made apparent with the differing opinions on the audio tuning. One one hand, the audio tuning was thought to improve the audio
quality of music coming out of the earbuds. This made listening to songs a much better experience
with the feature turned on. On the other hand, the
changes in the audio profile made by the tuner was deemed too artificial and made his experience not pleasant.
Putting the topic of the earbuds aside, it is indeed a pity that users will not be able to switch back to
their trusty old 3.5mm audio headphone/headsets without purchasing an
additional HTC audio adapter.
Camera
Quality 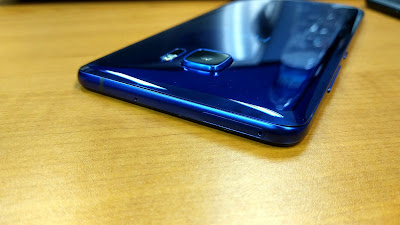 The HTC U
Ultra is said to be equipped with an improved camera module from the HTC 10
series. The camera was previously rated with a score of 88 on DXOMark, and is
known to take great photographs regardless of lighting scenarios or image type. While scores do matter to objectively quantify the overall performance of
a smartphone camera, here are some samples for our commentary and review. We
will be testing the camera in comparison with the Xiaomi Mi5s (which has a Sony
IMX378 sensor that is said to have a score of 89 on the DXOMark on the Google
Pixel)

In our
opinion, the Xiaomi Mi5s do seem to capture better colours from the rear
camera. The images seemed more vibrant and well reproduced. The HTC U Ultra’s
photos on the other hand looks rather monotonous.
Moving on
to portraits, it was seen that the photos from the HTC U Ultra was more
balanced in colours. The Xiaomi Mi5s have done too much post-processing on the image, lighting up much of the face to a point where the image seems unnatural.
The HTC U
Ultra excels in night images, as it could capture a good amount of details even
in low light situations. We would consider both smartphones good for night photography.
Ultra-Fast
Biometrics Authentication 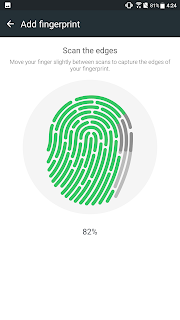 HTC was
able to integrate a 3000mAh battery into the HTC U Ultra. Comparatively, even
though 3000mAh could be seen as rather small as compared to other phablets, we still managed to get about 1.5 days of usage on the device with a single charge.
This could only be made possible with the proper optimization of both software and
hardware, and we believe that HTC has done a magnificent job here. It is the
phone with the longest battery life out of all the smartphones we have tested
thus far.

What we
didn’t like about the HTC U Ultra

We couldn’t
believe it… Why did HTC leave out a 3.5mm audio jack for this device? If a
smartphone is manufactured specifically for ‘U’, it should then also
accommodate our preference for earphones. We simple could not comprehend the
decision to leave out the jack, as the phone’s size should likely be able to
house the electronics required for a 3.5mm audio jack.

Moreover,
we felt that perhaps HTC should have done more work with the engineering of the
camera unit on the HTC U Ultra. Its camera hump meant that it will easily be scratched, possibly leading to permanent downgrade to image quality. Because of this factor, it is mandatory for owners of this
smartphone to protect it with a case/cover. This can also help with its back being a fingerprint magnet. Furthermore, we also felt that the performance of the camera on this device can be improved. 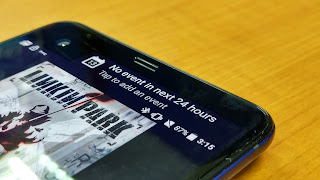 The additional
display on top of the main display failed to value add much to the functionality
of the whole smartphone. Its usage is still limited to several of HTC’s own
applications, and we felt that we were better off without it. 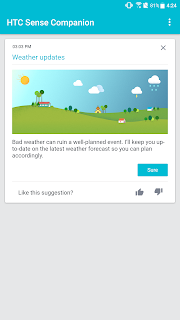 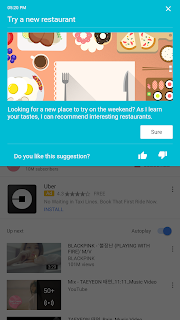 HTC has
added the HTC Sense Companion within the HTC U Ultra. This is a personal
assistant application that takes uses your location, how you use your device to propose suggestions. For example, it could recommend you leave
a little earlier if there was a traffic congestion. These recommendations are useful
for users, and makes the smartphone more intelligent.
Perhaps due to our brief period of usage of the smartphone, we did not encounter any good suggestions during our use. Furthermore, activating the
HTC Sense Companion took a hit on the device’s battery life. One may
reconsider if this application is actually worth using. 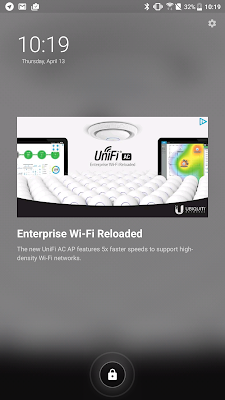 We also could
not believe that HTC would include advertisement right on the lock screen. Included 3rd party
advertisements on their Lock Screen News app adds to the disappointment we had about the device. This also destroyed the whole user
experience, even though we thought that it was a good pre-installed application
to use.
Conclusion 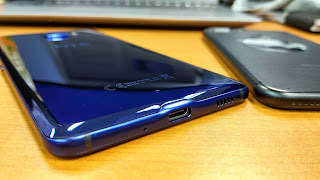 The HTC U
Ultra definitely has got all the distinctive features for a flagship smartphone
such as having great battery life, stunning display, a secondary display, a
good camera and sexy aesthetics. However, we felt that all these features failed
to come together to deliver a wholesome smartphone experience. The removal of
the 3.5mm audio jack also seemed to be a hostile move for audio enthusiasts,
especially when HTC was known to build smartphones that excelled in audio
quality.
Nonetheless,
the HTC U Ultra retails at $898 SGD, and is one of the more affordable flagship
smartphones available in the market. If you have a budget of $900 SGD, the HTC
U Ultra could still be a good choice.