$150 MILLION IN CONTRACT VALUE: DARKTRACE SOARS TO NEW HIGH
30,000 In-progress Threats Detected Across 2,400 Deployments
Singapore, April 13, 2017 – Darktrace, the leader in Enterprise Immune
System technology, has closed another quarter of phenomenal growth and demand
for its unique technology continues, securing contracts with a total value of
over $150 million. The Enterprise Immune System has detected 30,000 in-progress
cyber-threats across 2,400 deployments worldwide, ranging from Vancouver to
Melbourne. Darktrace now has over 375 partners, and 400 employees across 24
global locations. Unknown threats detected by the Enterprise Immune System include
the compromise of a video conferencing device, the vulnerability of back-up
servers containing senior executive communications, and an emerging attack
against a connected refrigeration system.
The Enterprise Immune System is the world’s
first and only machine learning technology to detect and fight against
in-progress threats in real time. Created by mathematicians from the University
of Cambridge, Darktrace’s tried-and-tested AI algorithms learn the normal
‘pattern of life’ of every device and user on the network to defend
organizations of all sizes against emerging threats. Unlike traditional
approaches that look at past attacks to pre-define and stop threats at the
border, the Enterprise Immune System heralds a new era in cyber security by
empowering networks to inoculate themselves against threats from within.
“The Enterprise Immune System has revolutionized
our security,” commented Terrell Johnson, Systems and Networks Manager,
Sunsweet – an global agricultural producer known for its dried food products.
“The amount of visibility we achieve from its machine learning approach is
unmatched. We are now finding anomalies, in real time, that would have taken us
weeks, or even months, to find on our own.”
“Our outstanding growth this quarter
highlights the fundamental innovation behind our technology,” said Nicole
Eagan, CEO, Darktrace. “The Enterprise Immune System is unique in its ability
to not only detect but also remediate in-progress threats, including subtle,
stealthy attacks, and ‘unknown unknowns’. Proven across thousands of
deployments, it is a true manifestation of AI in action making Darktrace’s
technology virtually impossible to replicate.”
Further details on Darktrace’s growth figures
include: 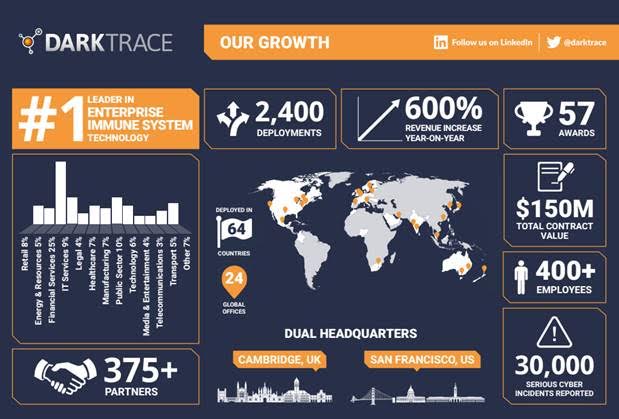 New Research: Only 5% of Large Companies Prepared to Meet IT Requirements of the New Digital Business