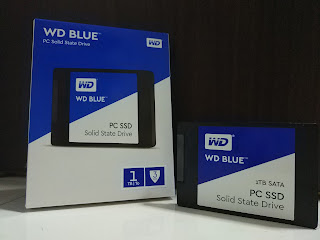 In order to gain competitive advantage in the storage market, Western Digital officially acquired SanDisk in May 2016. This allowed Western Digital to foray into the flash storage market and remain relevant with the increasing popularity of flash storage mediums. While many of SanDisk’s products remained to be branded under the same name, Western Digital has recently launched their first WD Blue and WD Green  Personal Computer SSDs. It seems like a move to consolidate all large secondary storage devices under the WD branding.
The WD Blue and WD Green are available in both SATA and M2 interfaces. However, these devices remains to be utilizing the AHCI protocol that is still common and compatible with most personal computer setups. Their storage capacities ranges from 128GB to 1TB. While the WD Green caters to a more budget friendly audience, the WD Blue aims to provide the best bang for the buck with its improved performance. Today, we will take a look at the 1TB WD Blue SATA SSD to find out more about the capabilities of this drive.

The Marvell 88SS1074 SSD controller is known to be used in the more mainstream and budget friendly SSD setups available in the market such as the Crucial MX300 and Kingston SSDNow UV400. Of course, it is expected that Western Digital went with the SanDisk 15nm TLC NAND flash that was proven to be working well for mainstream SSDs, providing good reliability and performance.

Here are the specifications of the system that is used to run the storage benchmarks. 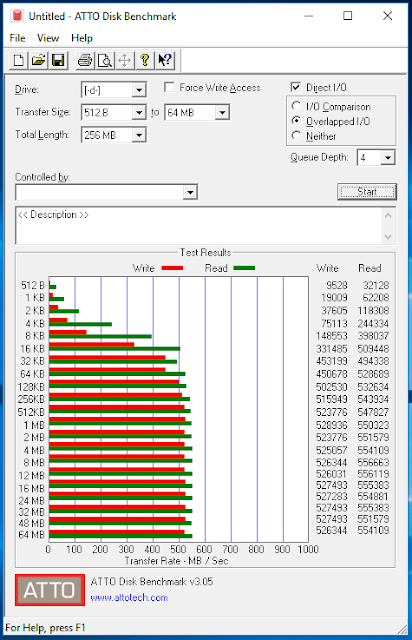 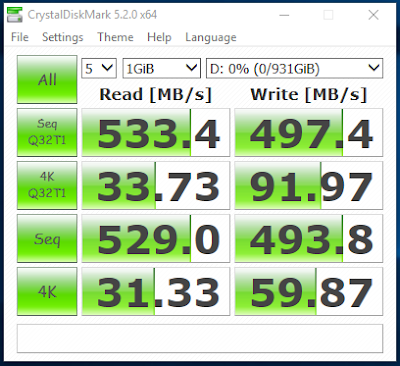 Did the drive perform to the speeds as claimed by the specifications list? Yes indeed. Based on the benchmarks on ATTO, the sequential read and write of the drive went up to 555MB/s and 527MB/s respectively. Even though these numbers may seem amazing, the performance on smaller block sizes matter as well, as the Operating System does much of such types of transfers for paging in of data blocks to the main memory. With blocks of 4K, the read and write of the SSD drops significantly, but the performance still remains average as compared to other SSDs available in the market.
In terms of performance, this drive is capable to bring out the best of personal computers, especially when transferring files of big data size. Of course, there will be significant increase in the responsiveness of the computer with the SSD upgrade as the access time of the data has largely decreased as compared to a conventional mechanical hard drive. However, if you are looking for the best of the best performing SSD available in the market, this drive is definitely not it.

The WD Blue PC SSD is an affordable SSD that is worth considering when upgrading your laptop or desktop. As Western Digital has already built a well established distribution network in Singapore, we thought that the WD Blue PC SSD could be more widely available than any other competing brands in the market.

The WD Blue PC Blue SSD (SATA) is available in Singapore at the following capacities and prices.

Judging that the WD Blue offers the standard performance that you can expect from a SATA AHCI SSD drive, one should consider more on the reliability, price and warranty aspects. The WD Blue PC SSD is competitively priced and with a 3 years warranty that Western Digital is providing, this SSD should be part of your consideration list for a brand new SSD.

A new $1.8bn market for force sensors in user interfaces as they move beyond touch