Twitter’s First-Ever Singaporean Music Collaboration
Brings @Sezairi LIVE to the World
●       #SezairiQA and a few LIVE songs on Twitter and Periscope @ 6:30pm on 31 August 2016
●       #SezairiLive debut show at Twitter APAC HQ in Singapore @ 7:30pm on 2 September 2016
●       Winners of @Sezairi photo caption contest get free tickets to #SezairiLive event
Singapore, 31 August 2016 – Calling all music fans in Singapore! Singapore Idol Sezairi’s Pre-Listening Party (#SezairiPreLP) on Twitter was a big hit last week where he shared exclusive video content and commentary about the story behind each track from his new self-titled album, ‘SEZAIRI’. Now @Sezairiplans to amp up his LIVE performances (#SezairiLive) on Twitter, Periscope and at Twitter’s APAC HQ to engage with his fans via social media and in the real world this week. 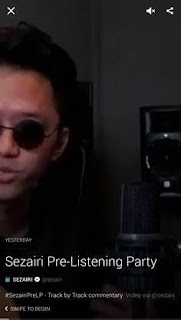 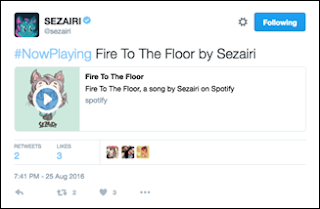 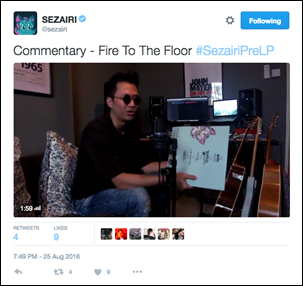 Embeddable Tweet: https://twitter.com/sezairi/status/768777252720881664
“Music is one of the most widely discussed topics on Twitter in Singapore and around the world. We’re happy to work with our global music partners like Sony Music on supporting local acts and Sezairi is a great choice for our first Singaporean music partnership. He’s very good at using Twitter to show his personality and to connect with his fans in the moment, such as when he live-Tweeted a taxi driver listening to his new song,” said Pratiksha Rao, Head of Media Partnerships, Twitter Southeast Asia.
She added, “We’re excited to do more in the local music scene and our work with Sezairi is a great example of how Twitter and Periscope give artists a global stage to engage in real-time with passionate music lovers, as well as enable fans to interact with their favourite music stars through Tweets, photos and live video.”
Sezairi Part 1 will be at 6:30pm, August 31st (today) via a live Twitter Q&A and Periscope viewing session. Fans can Tweet their questions in advance using the #SezairiQA hashtag and follow his Twitter and Periscope accounts @Sezairi to see his answers. During his Periscope session, he will also do acoustic performances of several songs from his new self-titled album. 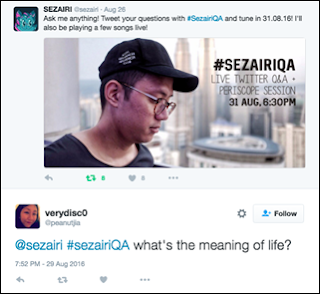 Embeddable Tweet: https://twitter.com/sarrahhearts_/status/769237275389534208
Sezairi Part 2 will be on Friday, September 2nd at Twitter’s Asia Pacific headquarters for his first-ever live show of the tracks from his new EP. The #SezairiLive event starts with the VIP Meet & Greet from 6:45pm-7:15pm, then doors open at 7:30pm for music fans to see one of the country’s best live performers. Fans can buy Standard ($25) and VIP ($30) tickets from http://sezairilive.peatix.com/ or they can win free tickets by Tweeting a caption for a photo of his cat Khaleesi: 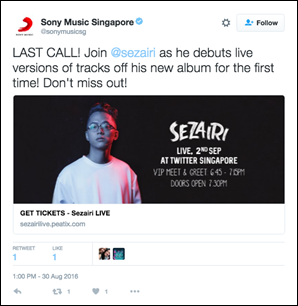 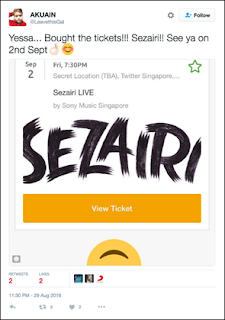 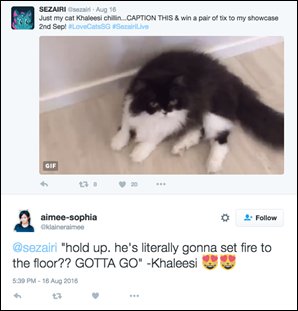 Embeddable Tweet: https://twitter.com/klaineraimee/status/765483200952971264
Sezairi’s fans in Singapore and around the world can see behind-the-scenes action and live content from the show by following @Sezairi and @SonyMusicSG official Twitter and Periscope accounts or searching for #SezairiLive hashtag on Twitter and Periscope.

Historic Dell and EMC Transaction Set to Close on September 7, 2016

Agricultural robotics and drones: a complex $10bn market by as early as 2022